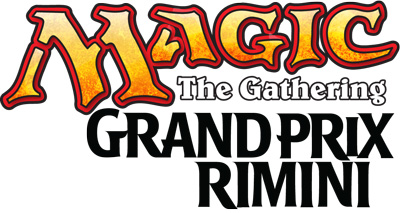 Online registration at www.tournamentcenter.eu until Friday, July 26 at 22:00

Join the main tournament and get a cool foil All is Dust promo card! But the fun doesn't stop there—a side-event schedule running Friday-Sunday offers many other opportunities to win great prizes, and you can also meet Magic artists Aleski Briclot and Nils Hamm and get your cards signed.

Rimini a one of the most famous seaside resorts in Europe located on the Adriatic Sea, with sandy beaches and many bars and restaurants and discos. Besides the costal activities, it's also an art city with ancient Roman and Renaissance monuments. It's the hometown of the famous film director Federico Fellini. Don't miss this great summer experience.

If you register with sleep-in, you have to send your decklist by e-mail to decklist@tournamentcenter.eu before Wednesday July 24, 20:00. If we don't receive your decklist or if it contains errors, you will be subject to the appropriate penalties (such as a game loss). At the event, you just have to go to the Side Events Stage before the start of your round, to hand in your Media Publicity Form, and to collect your participation foil.

The main tournament at Grand Prix Rimini is open to Magic players of all ages.

Judges
The Regional Judge Coordinator is Cristiana Dionisio. Judges interested in working at this event should submit an application through the ( Magic judge website ).

Aleksi Briclot
A concept artist and art director in the video game industry for nine years, Aleksi was lead artist on ColdFear, the horror-action game developed by DarkWorks for Ubisoft, then on Splinter Cell Double Agent, from the hit series and more recently on Haze (still Ubisoft) and Dungeon Runners (NCsoft). He also contributed on the Heroes of Might & Magic 4's trailer and the Prince of Persia 3 2005 E3's booth banner.

Also an illustrator, he is one of the main card and packaging artists for Wizards of the Coast (Magic: The Gathering, Dreamblade) and has drawn pieces for RPG books (hundreds of interior illustrations), magazines, and comics. He did covers for Mage, Vampire , C.O.P.S Rpgs, Tolkien, J.V. Jones, Bradley books, Horrorclix (Wizkids) packaging, Privateer Press, World of Warcraft gaming cards.

Nils Hamm
Nils Hamm, born and raised in Düsseldorf, Germany, works as an illustrator, concept designer, comic artist and painter. He likes to draw animals in the zoo, watch soccer, hike, and enjoy good food. You can find his work in the graphic novel "ASTRO", the short-comic "The Orb", appearances in "Spectrum – Best in Contemporary Fantastic Art" and many others. He designed characters for several video games, gives workshops and last but not least... he has drawn over 50 card images for Magic: The Gathering, including Grave Titan, Gilder Bairn, Grindclock, and Delver of Secrets.

Arriving by Train
There are good train connection to Rimini from Bologna (1 hour), Milan (3 hours), Florence (2 hours) and Rome (4 hours). You can reach the venue by taking bus line n.7 from the railway station.
www.trenitalia.it