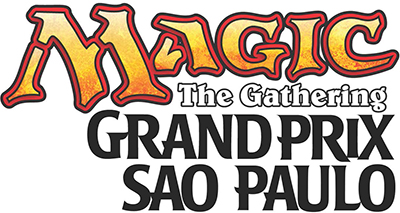 After two years, the Grand Prix circuit returns to São Paulo and not just in any year—this is 2014, which means "Fifa World Cup" for every single Brazilian.

Why exactly does this matter when it comes to Magic: The Gathering? Believe us, you will know that as soon as you get here! Keeping the awesome soccer spirit in Brazil, the event will be held at Clube Atlético Juventus, a very old a traditional soccer team/club.

This will also be the first time a Trio Limited Grand Prix is held in Latin America, a great opportunity none should pass up to literally play alongside his/her friends.

If you wish to upgrade your São Paulo experience, there will also be a VIP package, which includes the following benefits:

Judges
The Head Judge of this event is Carlos Ho (Level 4). Judges interested in applying for this event should do so through the judge center.

Players are responsible for bringing their own method of tracking life totals, card sleeves and appropriate counters or tokens.

Grand Prix Training
Since there are no Trials for Team GPs, Grand Prix São Paulo 2014 has prepared a little surprise for you: GP Training.
This will be a special training for the GP, where every 8 teams that sign up will play a Limited Trio event, which off course is also a great training for the main event.

Along with the main event, there are additional side-event tournaments to play in at a Grand Prix. Listed below are the side events offered at all Grand Prix on Friday, Saturday, and Sunday. Additional events and a full schedule can be found on the www.gpsaopaulo2014.com/#!prog/c1vts website. All side events (except casual events) will have a Planeswalker Points multiplier of 3x.

Willian Murai
Willian Murai, a.k.a Will Murai, was born in a small town in southeastern Brazil. While studying graphic design in college, he had the opportunity to work as a comic book colorist for American publishers, which earned him experience both in a professional and artistic sense. After that, he decided to become an illustrator and, since then, he has been working in fields such as publishing, advertising, and Internet, having recently dedicated special attention to game development and fantasy art.

Jason Felix
Coming out of Wisconsin, after graduate in college, he managed to work as a freelance creating illustrations of vampires for White Wolf Games, which boosted his career into the graphic editorial business. Jason them moved to San Francisco hoping to achieve one of this dreams: work in the entertainment industry and have his name recognized over the whole world. Today, with his dream fulfilled, Jason gives online lectures and works on personal projects.

Congonhas is more central, but doesn't receive many international flights, while Guarulhos is the main international airport. In both Guarulhos and Congonhas, travelers can get either buses or taxis which will take them to the central areas of São Paulo.

There are two official hotels for the event: Ibis Budget Paraíso and Ibis Budget Consolação. Let's Collect has also made a partnership with a hostel called The Connection, which is nearby a tube station and where guests can get 30% off room fees with the following code: Let's Collect Magic GP 2014.

Free transportation will be provided to the venue from Ibis Budget Paraíso.