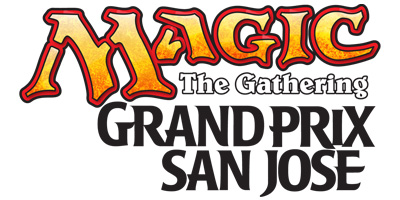 Return to three-person Team Sealed with Return to Ravnica! Grand Prix San Jose 2012 is the first Grand Prix in years to feature three-person Team Sealed play. This fun and challenging format is always a player favorite and is particularly exciting with Return to Ravnica. Grab some buddies and head to the heart of Silicon Valley for fantastic Magic with friends.

In addition to the main event, there will be a variety of team and individual Magic tournaments open to everyone Friday through Sunday. Several Magic artists will be available for sketches and card signings each day. Card dealers from around the country will help you round out your unique collection. Whether you come to win, see the spectacle, or just have a great time, there’s plenty for everyone.

The main tournament at Grand Prix San Jose is open to Magic players of all ages.

To be included in Wizards of the Coast's official online event coverage, Players must have a signed publicity release form. Forms can be downloaded here (15k PDF) and will be available onsite. Minors must have a parent or guardian’s signature on this form. Publicity releases will be collected during registration.

Judges and Admin Staff
If you wish to apply to judge at Grand Prix San Jose, please register at dcifamily.org.

Trial winners
Players who win a Trial event for a team-format Grand Prix are awarded 2 byes for their team in the Grand Prix that it feeds. Trial byes are not cumulative with other byes and do not pass down.

In addition to the main event, there will be Magic team and individual tournaments in a variety of formats Friday through Sunday. Grand Prix San Jose will have an amazing Artists Alley. Please visit www.cascadegames.com for information and updates on the weekend’s activities, including public events tournaments, attending artists and vendors and more.

Rob Alexander, Anthony Francisco, and Daarken will be at Grand Prix San Jose.

Hotel discounts are available for Grand Prix attendees for reservations made by the end of September 2012 (pricing after September 21 subject to hotel discretion).

Click here for directions to the San Jose Convention Center.