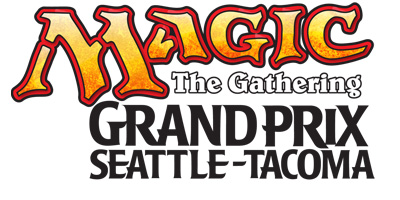 Grand Prix Seattle-Tacoma will be a fantastic opportunity for competitive and casual Magic players alike. The sealed format will allow you to build your collection and hone your card-selection and deck-construction skills as you compete against players from around the world. This event will be the first Grand Prix in the United States to offer Innistrad and Dark Ascension Limited play, and the Planeswalker Points modifier of 8x will send your points soaring.

In addition to the main event, there will be Magic tournaments in a variety of formats running from Friday to Sunday, all with a Planeswalker Points multiplier of 3x. Card dealers from around the country will be on hand to help you round out your unique collection. And because the Pacific Northwest is home to many of Magic’s best-known artists, we will have an amazing Artists Alley. Whether you come to win, see the spectacle, or just have a great time, there’s plenty for everyone.

Grand Prix Seattle-Tacoma is hosted by Cascade Games, LLC. Visit www.cascadegames.com for updates and more details about the weekend’s activities.

The main tournament at Grand Prix Seattle-Tacoma is open to Magic players of all ages.

Judges
The head judge for Grand Prix Seattle-Tacoma will be Chris Richter. If you wish to apply to judge at the Grand Prix, please register at dcifamily.org.

In addition to the main event, there will be Magic tournaments in a variety of formats running from Friday to Sunday. And because the Pacific Northwest is home to many of Magic’s best-known artists, we will have an amazing Artists Alley. Please visit www.cascadegames.com for information and updates on the weekend’s activities, including public events tournaments, attending artists and vendors and more.

All Public Events at Grand Prix Seattle-Tacoma will have a Planeswalker Points multiplier of 3x.

Check out www.cascadegames.com for updates on the artists who will be in attendance at Grand Prix Seattle-Tacoma.

Travel by Plane
The Seattle/Tacoma (SEATAC) airport is just 19 miles from Grand Prix Seattle/Tacoma. Cabs and rental cars are available at the airport. Public transportation is offered by Sound Transit. Take bus 574 southbound from SEATAC airport to the Tacoma Dome stop (on Puyallup Avenue). From there, walk or take elevator up to the Tacoma Dome Station light rail stop at the far side of the Tacoma Dome parking structure (25th Street). Ride light rail (free) to Convention Center stop (corner of Commerce and 25th). Transit maps and schedules at www.soundtransit.org.

Public Transport to Venue
The Convention Center is on Tacoma’s free light rail. Information on mass transit in the Puget Sound region is available at www.soundtransit.org.

Things to See and Do
The Tacoma Convention Center is near a wide variety of restaurants and entertainment options. The free Tacoma light rail stops next to the venue and is a great way to explore area businesses.