Team Dogma had never drafted together until this weekend. I asked them what their strategy was as they sat down against one of the most respected teams in the world and they said they didn't really have one. They just wing it. Team Antarctica doesn't have a particularly well defined strategy either. As this draft evolved, they picked their colors and then pretty much stuck to them. Only Jon played the same color combination as in the semi-finals, but all three of them once again played 2-color decks. The key to their success appears to be conservatism. They don't do a lot of counter-drafting and they don't switch colors very often. Both those things are called for occasionally, but most of the time Antarctica prefers to draft consistent, 2-color decks. They would prefer to see their opponents take chances and make mistakes.

Finkel took Stinging Barrier first pick, first pack and stuck with blue the whole way. Steve followed with Kris Mage and when he busted a Lieutenant in his own pack he settled down into red/white. Dan's first two cards (the 6th and 7th of the first pack) were Vine Trellis and Alley Grifters. Guess which two colors he played? Perhaps they figured that since they were the favorites and their opponents were somewhat inexperienced, this would be the most effective strategy. Or perhaps they always think this is the right plan.

Dogma didn't switch much either. Pack #5 added Thrashing Wumpus to Aaron Estrion's previously blue/red pile whether he wanted it or not. He seemed tempted to switch, but with Heffern already heavily into black in the middle seat, he decided not to.

The championship match will see Mike Heffern play his black/white deck against Finkel's blue/white. Finkel has 2 Waterfront Bouncers and a Stinging barrier, but the rest of his deck is a little thin. Estrion will take his blue/red into battle against Steve's red/white. Steve's decks is what amounts to a weenie swarm deck. It includes 7 Rebels and a bunch of other creatures, but not much removal (other than 2 Kris Mages) and very few tricks. Dan OMS has lots of black removal, a bunch of good Spellshapers, and a little bit of green fat. He'll duel against Rob Lizska's green/red beats. 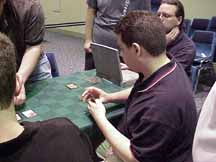 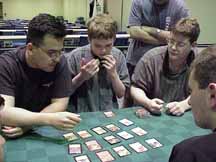 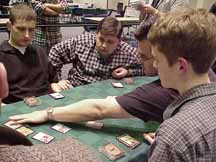 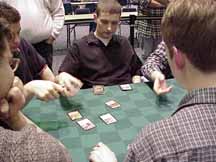 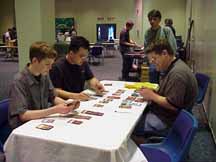 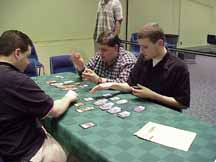