The final match was a slaughter. 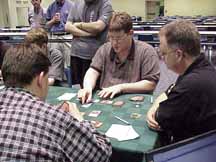 Aaron Estrion tried racing Steve O'Mahoney-Schwartz with fliers and blockade runner, but Steve's deck poured out random ground creature after random ground creature. Defiant Falcon added Thermal Glider and Lawbringer to Steve's attack and the Lawbringer prevented Estrion from leaving his Flowstone Crusher back on defense. Steve won the race going away. Game 2 saw O'Mahoney-Schwartz play a turn 2 Defiant Falcon that Estrion couldn't remove. Rebels poured out of his deck. Estrion tried to stabilize with Timid Drake, but Steve had creatures to play. Estrion tried to used Ensnare to fog for one turn, but Steve used Downhill Charge to pump up his Falcon and deliver the fatal damage.

Mike Heffern had to mulligan before game 1 against Jon Finkel and he never really stabilized. Job punished him with Waterfront Bouncer until Heffern managed to sweep the board with a Massacre. However, Finkel just rebuilt his position with Balloon Peddler and Defender en-Vec. All Heffern had were Steadfast Guards so he was helpless and eventually lost. 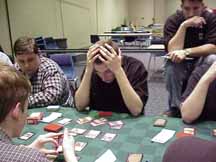 The rest of the match did have some tension - Dan O and Finkel were racing to see who could win first and have the honor of clinching the win. Heffern double mulliganed and Finkel set up his Waterfront Bouncer/Groundskeeper combo, but Finkel had nothing but 1-power creatures to attack with. Finkel splashed green into his blue/white deck partially because of Groundskeeper and partially because he simply didn't have 23 quality spells. Heffern once again stabilized the board with a Massacre.

Meanwhile Dan O. was facing down Blastoderm, Snorting Gahr, and Giant caterpillar. His side of the table included Spidersilk Armor, Plague Witch, and Enslaved Horror, but that just wasn't enough. Plague Witch chumped Blastoderm and the Horror killed the Caterpillar, but that left Dan at 4 when Blastoderm faded away. Dan knocked on his deck and then yelled 'Tight, Tommy!' as he drew the Swamp he wanted. Sever Soul took care of that Gahr and gave him some breathing room in the form of 3 life. Liszka answered with Silverglade Elemental but Dan used his other Sever Soul to kill it!

Puffer Extract made Dan's life scary while Finkel played out Wandering Eye and Stinging Barrier. Heffern recovered from his mulligan and had board advantage after his Massacre, but Finkel had a 20-7 lead in the life race. Stinging barrier and Wandering Eye looked like they would allow Finkel the honor of clinching, but Defender en-Vec slowed down the actual kill. 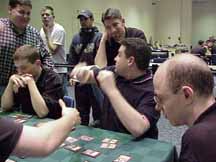 Dan and Liszka got into a top-deck battle once all their creatures died. Dan came up with Megatherium, but it died to Desert Twister. Dan then drew and cast Highway Robber. Liszka drew land followed by the always popular land and Dan clinched the match win for Team Antarctica two turns before Finkel could. 3-0/6-0 is some good.

The victorious team was quick to point out that Steve was their MVP - he didn't lose a match the entire weekend. Interestingly, Dan didn't lose in the Top 4. Congratulations to Team Antarctica