There was little doubt about which match was the Feature Match in round 4. Pudge and Our Move Games were two of the favorites coming in and they were both undefeated with their first decks. OK, that's only one actual round (and two byes each), but this was still a big match. 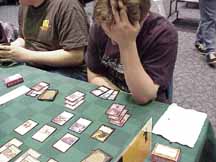 Before the round began Rubin said "I put you on green/white, Turian." Turian stuck out his hand and asked "Bet?" Rubin declined, but baby Huey took the bet and lost five bucks. Turian was actually playing a red/white weenie swarm deck with a healthy dose of rebels. Scott Johns got the green beef to go with his two Massacres and a Forced March. The reason Johns got that deck was because Pudge expected their opponents to hand the Rebel deck to their seat C player. That's because in the draft, seat C is in the best position to draft white. Thus seat C players would have practiced with Rebels and so, Pudge reasoned, it would make sense for most teams to give the white deck to their C player even in the sealed portion of the event. It didn't actually work out that way this round, but it' still a reasonable theory.

Turian traded blows with Rubin's black/blue deck for several turns and eventually set up Cave-In/Sivvi's Ruse. That allowed him to kill 3 of Rubin's creatures without losing any of his own. Rubin was thus forced to leave his Wandering Eye and Oraxid back on defense. After several turns of top-decking (always fun with Wandering Eye in play), Rubin was forced to waste his Ensnare just to hold Turian off for one turn. Two turns later Turian swarmed him to death. 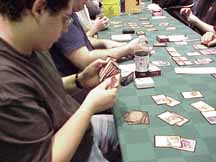 Turian was ahead early in game 2, but everything changed when Rubin played Ascendant Evincar. Suddenly half of Turian's creatures were dead and Rubin had a 3/3 flier. Turian never found an answer. In game 3 Rubin killed each of Turian's first 5 creatures, but didn't have any creatures of his own. Eventually Rubin played out 4 creatures of his own, but Turian killed them all with a Cave-In. That left Turian's lone 2/2 as the only creature in play (he used Cho-Manno's Blessing to save it from Cave-In). Rubin was forced to play Parallax Dementia on it and take 10 in order to kill it. However, Rubin's painful plan worked out since he dropped Ascendant Evincar two turns later and the Evincar won him the game and the match.

Gary Wise's first deck included Coastal Piracy, Aerial Caravan, Extravagant Spirit, and 2 Cloudskates. His second deck had all of those cards again plus a 3rd Cloudskate! In game 1 he never did draw a Mountain (his second color), but his fliers were so good that he beat Jensen's blue/white deck anyway. Game 2 was a complicated blue on blue battle, but Wise has lots of practice with that sort of match. Jensen's Wishmonger wasn't enough and Wise won the match 2-0. 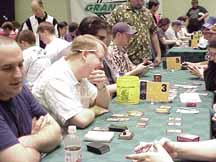 So the match all came down to Scott Johns and Mike Bregoli. Bregoli had a red/green beatdown deck while Johns had green fatties and black removal. Game one lasted forever with the players trading creatures and removal. Johns raised his voice at one point and announced "Sever Soul your Woodripper � I think that's good for me." However, Bregoli then swept the board with a Rupture. Johns answered by top-decking a Hunted Wumpus. Bregoli's deck served up a Lumbering Satyr, but that isn't exactly an answer. Game 2 was anti-climactic. Johns delivered Blastoderm beatings while Bregoli stalled at three land. Johns won 2-0 and thus Pudge won the overall match 2-1.