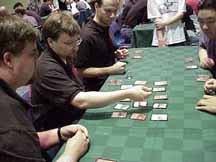 Your Move Games and Fungasaur both went 5-1 on day 1 and both were looking forward to the Team Rochester portion of the Grand Prix. YMG won the die roll before the draft and chose to force their opponents to open the first two packs. Trevor Blackwell (Fungasaur's middle player) opened the first pack. He had Jeff Fung on his left (getting second pick) and then the Your Move players lined up as follows: Darwin Kastle, Rob Dougherty in the middle, and Dave Humpherys on the right. Terry Tsang sat in the A seat and would be the last player to draft. 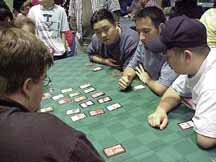 Pack 1 defined the entire draft. Blackwell opened up Overtaker, Primeval Shambler, Thermal Glider, and Sever Soul (in addition to Gerrard's Irregulars, Saprazzan Outrigger, Tiger Claws, Indentured Djinn, Orim's Cure, Charm Peddler, and Ancestral Mask). His team (via non-verbal communication) decided early that Blackwell would take the Overtaker, but they seemed very undecided about whether Fung should go with Thermal Glider or Primeval Shambler. Fung, in seat C, was in the best seat for drafting white (since his teammates could feed him all the Nemesis white) and his first instinct was to go Glider. However, he then thought about the fact that Primeval Shambler is simply a better card and eventually decided to go with the Shambler. 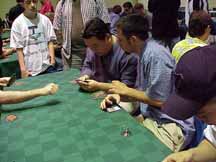 Here's the flaw with his logic: if he does take the Glider then he puts Your Move Games in a very awkward position. There would still be two great black cards on the table (the Shambler and the Sever Soul). YMG would be forced either to let Terry Tsang have one or else to draft both black cards into different decks. Drafting both black cards could mean they'll play both, but getting your opponents to commit to splitting black in the very first pack is probably a good thing. YMG's other alternative is to not play one of the black cards, in which case Fung could have forced them to use up one of their picks on a counter-draft. Since he took the Shambler, YMG got to pass the Glider all the way down to Humpherys in the good Rebel seat while Kastle picked up Gerrard's Irregulars and Rob took the Sever Soul. (Tsang took Saprazzan Outrigger and Tiger Claws while Humpherys draft Indentured Djinn (but didn't play it) and Kastle ended up with the Orim's Cure.) 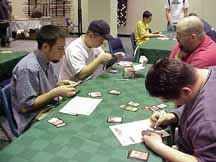 Fung took Squallmonger first out of his own pack. Kastle then drafted Kris Mage and Dougherty followed by taking Giant Caterpillar over Spidersilk Armor. Humpherys drafted Drake hatchling and settled in to draft blue and white throughout the entire draft. Tsang seemed a little surprised to get Spidersilk Armor, but wasn't complaining. Blackwell took Wild Jhovall and Steadfast Guard. That left Tsang with a Dragonfly. Tsang wound up green/red while Blackwell went blue/white. In retrospect, Fungasaur would have been better served to let Tsang draft the Wild Jhovall, but they were probably unsure of their colors this early in the draft. 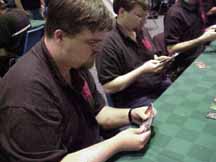 Kastle seemed to want to draft red/white, but the black was so deep in the rest of the Masques packs that he wound up with two Sever Souls and two Snuff Outs. This move also allowed him to draft black cards in packs 7-11 that otherwise would have gone into Fung's deck. Fung had trouble figuring out his second color. Since Tsang went green, there wasn't much green left for him to draft if he wanted to follow up on his Squallmonger thought. He dabbled in both blue and red, but a second Primeval Shambler convinced him to try to draft a mono-black deck. He wound up playing mono-black deck plus 2 green cards: Squallmonger and Deepwood Drummer. His card quality, however, wound up a little low (he had to play Viseling and Mind Swords, among others, in order to fill out his deck). Still, two Shamblers and an Intimidation gave him a decent shot against Humpherys' blue/white deck. Humpherys had a really nice Rebel engine (Sergeant, two Falcons, one of each Glider, one of each 'Bringer) and no bad cards in his deck. Kastle wound up with solid creatures, solid removal, and 3 Cavern Crawlers against Tsang's mediocre red/green deck. Blackwell had a good blue/white deck with Coastal Piracy, Kor Haven, Overtaker, and Waterfront Bouncer as the highlights.

Humpherys played a turn 2 Defiant Falcon in game 1 and Fung couldn't remove it. Fung had Primeval Shambler and a bunch of swamps, but Humpherys' Lightbringer forced him to leave the Shambler in his hand until he drew some removal. When Humpherys played an Outrigger, that shut down Fung's ground assault. Then Humpherys started attacking in the air. Charmed Griffin came to play and then the Falcon recruited both Gliders into play. This game just wasn't close.

Game 2 was more interesting. Fung had Vendetta ready to kill this game's turn-2 Falcon and he got to play Intimidation for free when Humpherys played Charmed Griffin. When Fung untapped and removed Devout Witness with Maggot Therapy and still had Seal of Doom in his hand, things looked good. However, Humpherys knew he couldn't remove Intimidation and had to race. He played Silkenfist Order on his next turn and then Oraxid plus Fresh Volunteers. Fung killed the Griffin but he didn't have many creatures of his own to race with so he was forced to play defense. Viseling and Deepwood Drummer couldn't hold off the blue/white beats - Silkenfist Order was just too big and Fung never stabilized the board.

Terry Tsang came out quickly in game 1 with turn-2 Rushwood Dryad and turn-4 Giant Caterpillar. However, Kastle paid four life to cast Snuff Out on the Caterpillar and applied his own pressure with Wild Jhovall and Laccolith Grunt. Two Sever Souls and a Laccolith Warrior later, Kastle was in a dominant position and Tsang was scooping.

Kastle drew 1, 1, and then 0 lands as he triple mulliganed before game 2. His four card hand couldn't deal with Tsang's Laccolith Warrior and Tsang evened the match at 1 game a piece in a hurry. Game 3 was close - Kastle got hit hard by Tsang's early Woodripper and Rusting Golem, but they faded away with Kastle still at 7 life. Kastle's Cavern Crawlers and then a Laccolith Warrior carried the day. Thus Your Move Games clinched the match while Dougherty and Blackwell were still early in game 2.

Trevor Blackwell drew Overtaker, Kor Haven, and Waterfront Bouncer early in game 1, but all he was able to accomplish with them was to stall. He couldn't draw enough land to do much else and Dougherty was eventually able to bust through for 20 points of damage. Blackwell's game 2 Coastal Piracy was too much for Dougherty to handle, but time was almost out so the players weren't able to finish game 3.