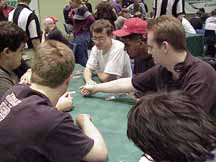 Tight Club won the flip and chose to go second. The first pack's best cards were clearly Shock Troops, which Jensen took in middle position, and a Rishadan Airship which went to Mike Bregoli. The only possible drawback to this strategy was that it passed up the opportunity to pass three quality red cards, since Lightning Hounds and Arms Dealer were still in the pack, forcing Tight Club to choose between bad alternatives. There were also two good white cards, Ramosian Sergeant and Steadfast Guard. McKenna was next and took the Arms Dealer. Williams took Lightning Hounds in the middle, but Williams is normally not a red mage. Maher took Steadfast Guard. Rubin wheeled the two good cards left in the pack, the Sergeant and Tiger Claws.

Pack two Bregoli had three real choices, Vendetta, Thunderclap and Ballista Squad. Rubin already had a Sergeant and Jensen had a Shock Troops, so he chose Vendetta despite a traditionally white position on the left. The Thunderclap went to McKenna and Maher got the Ballista Squad. Williams got stuck with a Balloon Peddler, since the pack had nothing better. Rubin picked up a Disenchant, and McKenna picked up a Magistrate's Veto. Pack three McKenna took Squallmonger, looking Red/Green, Williams got the Drake Hatchling and Maher took Ramosian Lieutenant, a natural division preserving the natural color combinations. Rubin took Giant Caterpillar and Alabaster Wall, Bregoli got Balloon Peddler and Jensen got Crossbow Infantry. Bregoli picked up Bog Smugglers, which was probably a Grey Ogre, and that was all for that pack.

Pack four Williams took Highway Robber in a very weak pack. Maher then made a questionable pick of Invigorate over Muzzle with Desert Twister still in the pack. With two good green cards followed by a green mage getting the wheel, taking Muzzle forces Our Move Games to either counterdraft a green card or split green. Instead, Rubin got the Desert Twister, Jensen got the Muzzle and Bregoli picked up Deepwood Ghoul. McKenna was left with Deathgazer and Howling Wolf for a terrible wheel, and except for a Disenchant the pack was downhill from there. Pack five, Maher first picked a Ramosian Sergeant, passing a Waterfront Bouncer despite him and Maher not yet having very solid colors. However, it forced Rubin to counterdraft a Rishadan Airship while Bregoli picked up the Waterfront Bouncer, giving McKenna the Venomous Dragonfly and letting Williams take away Deepwood Tantiv and get Panacea. Sixth pack, Rubin picked up Snorting Ghar, Jensen got Devout Witness and Bregoli took Sever Soul. Tight Club then rolled up the rest, giving Maher Pious Warrior and Task Force, Williams Battle Rampart and Brainstorm and McKenna Lure and Rushwood Herbalist. 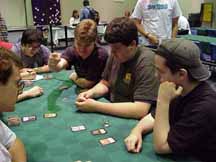 Reversing direction for pack seven, Rubin opened a Silverglade Elemental for himself, leaving McKenna a Snorting Ghar, Williams a Snuff Out and Maher to take the Bargaining Table. Bregoli then got a Deepwood Legate that looked to be free and a Counterspell, and Jensen got a Kyren Sniper. Pack eight, Maher opened Volcanic Winds, prompting many fingers in the air. It went to McKenna of course, with Maher picking up a Steadfast Guard and Williams a Drake Hatchling. Jensen picked up Kris Mage and Wild Jhovall and Rubin got a Spidersilk Armor, but that pack hurt Our Move Games a lot. Pack nine Williams got a Sever Soul and McKenna a Gerrard's Irregulars. Bregoli picked up Chameleon Spirit for Maher's almost mono-white deck, Jensen got a Nightwind Glider and nothing else in the pack was worthwhile. The colors have been pretty stable for a while now. Maher is playing white with a splash of green. Williams is in blue/black, McKenna is playing red/green. On Our Move Games, Bregoli is blue/black, Jensen is red/white and Rubin is white/green, splitting the white more or less evenly.

McKenna opened a Spidersilk Armor for himself, giving Bregoli Drake Hatchling, Jensen Last Breath and Rubin to take away Rishadan Airship. With two Airships, Rubin now has a serious option to go with a blue splash if he gets other good single blue spells later on. Williams took a Soothsaying and Maher got a Task Force and Giant Caterpillar. Bregoli then opened Thrashing Wumpus for himself and a Vendetta that Jensen had to take away. Rubin took Ramosian Rally, passing Maher Fresh Volunteers and a Warmonger all the way to McKenna, whose deck was rapidly becoming very hard to beat. McKenna also picked up another Lure here, and Maher got a Crossbow Infantry that would later prove amazing. Jensen then opened and took Ballista Squad, giving Rubin Steadfast Guard. Williams received a Saprazzan Outrigger and Cateran Kidnappers out of the pack, and Maher got just an Orim's Cure and Venomous Dragonfly. That was the last of MM, and NE was ready with the bombs. One thing to note was that both teams thought that Jensen's deck was poor and suffering for cards at this time, although it turned out fine.

The first pack was just amazingly deep. Jensen got Laccolith Warrior and Bregoli got his first Intimidator. McKenna took Treetop Bracers over Flowstone Crusher to put Rubin in a bind, Williams took Plague Witch over Ensnare, and Maher took Defender En-Vec. Rubin had to take Voice of Truth and Wandering Eye, making it look even more like he would splash blue. Maher took away a Laccolith Titan, Williams got his Ensnare and McKenna got his Crusher. Then Bregoli opened Lin Sivvi. He decided he had to take Rathi Intimidator instead, giving Maher the Defiant Hero. McKenna got another Crusher and Williams got Wandering Eye. Rubin then got an Ensnare to complete the splash along with Defender En-Vec, Jensen got Rupture and took away a Carrion Wall. On the way back, Williams got a second Plague Witch and Bregoli got his first Stronghold Discipline.

The next pack was opened, and there was Predator, Flagship. Tight Club decided to give it to Maher, whose deck was suffering despite Lin Sivvi in the face of Bregoli's speed, flyers and Intimidators. The Armor went to Williams despite Jensen's multiple Devout Witnesses so McKenna who didn't need the help could pick up Stampede Driver. Rubin got a Lawbringer and Seal of Strength, and Jensen had to settle for a Toady and a Seal of Cleansing. The next pack, Williams picked up Seal of Doom and Maher got a Lightbringer to use with Lin Sivvi against Bregoli's army. Rubin took a Crusher away while Jensen took another Laccolith Warrior and Bregoli took away the Flowstone Slide from a pack flooded in power red cards. The next pack had ANOTHER Predator. Maher had to take it, giving him two Flagships. Rubin for a Blastoderm, Jensen got a Crusher and Bregoli another Intimidator. The last pack was the only one from Nemesis with a normal power level, and Jensen still got Ancient Hydra and Bregoli Belbe's Preacher. 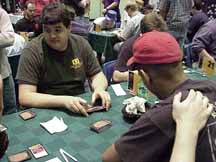 Unfortunately, the actual play hinged to a large degree on mana problems. Jensen was stuck at one land most of game one, and a mana flood sealed his doom in game three in what seemed from the decks to be about an even matchup. McKenna had an amazing deck, but mana problems kept him too out of two of three games and he lost. Meanwhile, Maher got up to five lands (Jensen's response to the fifth was "oh, well.") and started using Predator to take out Bregoli's flyers. Soon he had seven lands, had stabilized at five life to avoid Bregoli's three copies of Stronghold Discipline and won after Bregoli attempted to Hoodwink/Counterspell the Predator and Maher played the OTHER Flagship. Game two Maher didn't get Predator and didn't get a searcher and had some mana problems, which let him get run over. Game three Maher got out his Sergeant on turn one and started moving up to Lin Sivvi, but Bregoli drew a ton of creatures and Maher couldn't find land number six for Lightbringer recursion. Bregoli drew two Stronghold Discipline, and used his evasion creatures to put Maher and his rebel engine in range for the win as time ran out.