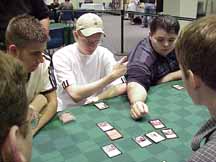 The first pack of the draft had Thermal Glider, Shock Troops, Sever Soul, Ramosian Sergeant and Crenellated Wall. Hubbo chose not to put an artifact on the left to have flexibility next pack, instead taking the best two cards in the pack. The odd choice was to put Shock Troops on the left and Thermal Glider in the middle, since normally white goes on the left to give you as many shots at it as possible. Dogma elected to put the Sever Soul on the right, then the Ramosian Sergeant in the middle and the Crenellated Wall on the left again the Shock Troops. Carpenter took Tiger Claws as the first card of the wheel, and took gambled with Ancestral Mask as the second, letting Estrion have Sailmonger and Heffern get Charm Peddler, the remaining playable cards. Ancestral Mask can be anywhere from great to unplayable, while the alternative cards were off color but solid. It also cuts both ways in reacting to it. The other team can cut off the enchantments, but it also forces them to avoid certain picks. A threat can be stronger than its execution.

Pack two Opalka opened Waterfront Bouncer, so his pick was easy. There were three big red creatures in the pack, so picking one of them wouldn't have done anything. Instead, Dogma wisely passed all three, taking in order Cateran Brute for Sever Soul, Steadfast Guard for the Sergeant and Rishadan Brigand for Sailmonger. Carpenter took two of the three red creatures, taking Gerrard's Irregulars and Ogre Taskmaster, and Hubble took the Henge Guardian and Orim's Cure to stay on target in white. That gave the Saprazzan Outrigger back to Estrion and the Wild Jhovall to Heffern, choosing to run W/R rather than B/R. 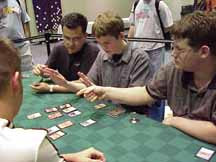 Dogma then had a minor argument. Liszka wanted to take Intimidation and did, despite vigorous pointing at Phyrexian Ghoul and Highway Robber by his teammates. Heffern took Arrest and Estrion took Highway Robber with Thunderclap still in the pack, choosing a double black spell with a committed other black player over a better red splash card without a committed red mage. Carpenter happily snatched up the Thunderclap, Hubble took Ramosian Rally and Disenchant and Opalka took the Deepwood Ghoul and the last important card, Tremor.

Pack four Dogma chose to have Heffern take Lunge and Estrion take Blockade Runner, indicating that they were far from committed to splitting the black, since Maggot Therapy was still in the pack. The Therapy would go to Opalka, and Hubble took Trap Runner. Carpenter looked ahead to where Dogma would have to put their green mage, and concluded that it would probably end up on their right, so he took Rushwood Dryad to make it harder for his opponent to start drafting green and prevent him from getting the Dryad himself, passing cards that are better in the abstract. It paid off, as Liszka ended up taking away Muzzle on the wheel instead, and the Flaming Sword Carpenter would have taken came back.

Pack five, Estrion took the Stinging Barrier, and Hubbo took the best cards they could play. Carpenter took Snorting Ghar, Hubble took Devout Witness and Opalka took Sever Soul. Liszka got Unmask and Alley Grifters, and Heffern got Lightning Hounds and Pious Warrior. Pack six had both Gliders in it, so Hubbo gave Hubble the Thermal Glider he could use and had Carpenter confiscate the Nightwind, while Opalka took Sever Soul. The rest of the cards were a power level down. Liszka picked up a Persuader and Deepwood Tantiv, Heffern got Steadfast Guard and Charm Peddler, and Estrion got Panacea and Saprazzan Outrigger. The green cards in the draft so far had been very week, and Dogma didn't yet have a real green mage; this was Liszka's first decent green card, and that put him one ahead of his teammates.

Pack seven reversed the order of drafting, and Carpenter was quickly handed a Volcanic Winds. Estrion got Primevil Shambler, making a splitting of black seem likely again. Heffern took Kris Mage and Liszka started to hone in on green with his own Rushwood Dryad, and got a Wall of Distortion. Hubble picked up a Blockade Runner on the way back, and Opalka got an Undertaker. Pack eight, Dogma opened up a Waterfront Bouncer for Estrion, but much more importantly it got a Two-Headed Dragon for Heffern! That's a lot of heads. They chose as their third pick to counterdraft Ramosian Sergeant, passing on Rishadan Airship and Shock Troops. Opalka got the Airship, Carpenter got the Troops and a Gerrard's Irregulars, and they handed back a Word of Blasting. The next pack Heffern took Ramosian Commander over Nightwind Glider, and Liszka took Sever Soul. Hubbo then chose to counterdraft Charm Peddler and take Nightwind Glider and Shock Troops, and then Estrion could afford to take Tiger Claws and still take away Ramosian Sergeant, keeping his options marginally open. Opalka then picked up a Cowardice, which can dominate an entire match in the right situation but turned out to be unplayable.

Next pack, Liszka opened up Sever Soul, leaving Hubbo to sweep up Blockade Runner, Jhovall Queen and Silverglade Elemental. Estrion then took Counterspell and Invigorate, continuing to be ambiguous on colors. Carpenter picked up a Battle Rampart on the way back and Hubble got a Devout Witness. Hubbo then got Stinging Barrier, Charmed Griffin and Horned Troll out of the next pack. Estrion chose to take Instigator, which he says he likes a lot, along with a Darting Merfolk. Heffern cleaned up with Lightning Hounds and Cho-Manno's Blessing, and Liszka had to take away Kyren Sniper and Hired Giant. Carpenter picked up a second Ancestral Mask, although the strategy was pretty clearly not going to be worthwhile, especially against black.

The last pack of MM, Hubble decided to counterdraft a Stinging Barrier with a Rishadan Airship still in the pack, apparently thinking that Barrier was so much better that it was worth taking away even if it took Dogma out of a bind. Carpenter took Snorting Ghar, leaving Dogma to take Rishadan Airship, War Cadence and Sabre Ants, after which Opalka took away Spidersilk Armor and Pious Warrior, letting Heffern get Lightning Hounds as the last worthwhile card on the way back.

In Nemesis, Hubble opened up Voice of Truth for himself and a Battlefield Percher for Opalka, since he was playing against another white deck. Liszka picked up Seal of Strength, Heffern got Defender en-Vec and Estrion got Plague Witch, letting Carpenter wheel Lacothian Grunt and Flowstone Wall. Another option would have been to take the two red cards, denying Carpenter anything on the wheel other than counterdrafting, and still leaving plenty of cards to take even if he did, which would also kill the pack for his teammates later on - Seal of Removal and Submerge were all that was left.

Next pack, Opalka took Belbe's Armor first, passing to Dogma. Liszka got Woodripper, Estrion clearly wanted Ramosian Commander, but Heffern took Defiant Falcon over Ancient Hydra. Carpenter was thrilled to see the Hydra, which was the only card he could use, and Hubble wheeled one of each bringer. Liszka picked up a Stormgald Thug on the way back. Third pack of Nemesis, Dogma was handed Seal of Doom, Avenger en-Dal and Belbe's Poacher. That left Carpenter Seal of Fire, Hubble Silkenfist Order and Stormgald Machinist and Opalka Vicious Hunger and Wandering Eye. Fourth pack, Heffern got another Defiant Falcon, Estrion got Belbe's Armor. Then there was a failure of communication on Hubbo, and Carpenter counterdrafted Rathi Intimidator away from his own teammate. Hubble took Lawbringer and a frustrated Opalka took Rathi Fiend instead. Liszka then got a Rootwater Commando and Complex Autonamon out of harm's way, and Hubble got a Stormgald Biologist.

With two packs to go, Estrion opened a Rhox and chose to counterdraft it, leaving Ancient Hydra, Treetop Bracers and Blastoderm still in the pack for Carpenter. It meant taking a green card away from his teammate, but Rhox is so good it's worth it. Carpenter got an Ancient Hydra, Hubble a Jolting Merfolk and Opalka got to take away the Blastoderm. Liszka got Stormgald Thug and Treetop Bracers, and Heffern got Lawbringer and Seal of Removal. In the last pack, Carpenter opened up Blastoderm, Hubble got Defiant Vanguard and Opalka showed that he too thought Complex Automaton was strong. A few mediocre cards later the draft was over. 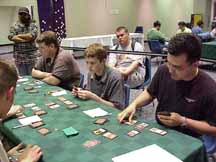 The match between Carpenter and Liszka was expected by both sides to be one sided, as Carpenter's deck was absolutely insane and Liszka's was struggling badly. Instead, it went the other way. First game, Carpenter drew four Forests and five red spells, and got his first Mountain too late in the face of such Intimidation. Game two Liszka drew Sandstone Needle at the worst possible time and it actually cost him a turn instead of helping his mana development, but his creatures were too good and Liszka couldn't deal with them. Game three again Liszka came out fast, this time with Rushwood Dryad and Skulking Fugitive. Carpenter sat there drawing land after land as Liszka matched his kill for Carpenter's creatures. Eventually, Volcanic Winds had to be burned to kill the Fugitive and Carpenter could not find an answer. 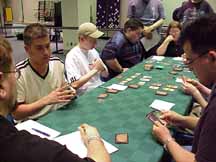 Hubble and Heffern both had good decks. First game, Heffern brought out the big guns: The Two-Headed Dragon. Hubble started to search out for his Thermal Gliders to deal with it along with his Voice of Truth, but the first Glider was Muzzled for time and then a Cho-Manno's Blessing came down and the Dragon became unstoppable. Game two Heffern had a great mix of creatures and removal, casting Afterlife on Hubble's Jhovall Queen and leaving Hubble with no way to deal with the multiple Lightning Hounds after being forced to make unfavorable trades while Defender en-Vec had been on the table earlier, ending the match and handing Dogma the victory. The third match was still ongoing, with Opalka's Wandering Eye slowing things down in multiple games; he'd won one game with Sailmonger and Battlefield Percher and was trying to win this one off of a Complex Automaton against a land stalled Estrion by holding all but four lands in his hand, and just as the critical point of the game was reached with Estrion back up to seven after a Highway Robber and able to stop the Automaton by using Seal of Removal on it and Dazing it if it was recast without a fifth land on the table; if Opalka played the fifth land that would give him seven permanents. Instead, Opalka conceded once his teammates had already lost.