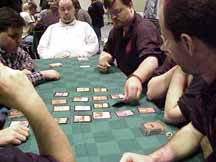 These two teams are getting very used to playing this match-up for high stakes. They played in the semi-finals of the Team Pro Tour in D.C. last fall and again in the semi-finals of the Team Challenge 2000 in New York last month. Your Move games won the flip and chose to force Jon Finkel to open the first pack. Steve OMS then got to draft second, followed by Darwin Kastle, Rob Dougherty, and Dave Humpherys before Dan OMS finished things off. 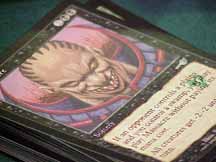 There wasn't much in the first pack. Finkel took Dehydration and Steve drafted an Undertaker. YMG chose to put the Deepwood Drummer that was left into Rob's deck and the Alabaster Wall went to Dave. It was easy for Antarctica to stick to their guns in pack two with Steve drafting Vendetta. Darwin took Enslaved Horror second and then led Dan to go into black for a 5th pick Bog Smugglers. Antarctica didn't switch around much after that. Dan went red/black, Finkel went blue/white (and picked up 3 Dehydrations along the way), and Steve drafted green/black with many removal spells and a number of Spellshapers. He only has a handful of fat, but his deck got a lot better when Massacre dropped into his lap in the final pack of the draft. His opponent - Dave Humpherys - is indeed white. Humpherys is almost mono-white, but he is splashing in a touch of black removal.

Two-thirds of Your Move Games is playing 3-color decks. Notorious Assassin? Sure - add him in! They never hesitated to dip into a third color when it allowed them to improve the quality of their decks. In fact, all three members of YMG are playing Swamps and black removal spells! Darwin's deck is mostly blue/black, but he is splashing red for even more removal. Rob's deck is red/green with a few black removal spells. Their basically plan seemed to be to draft every removal spell they could possibly get their hands on. This plan also allowed them a lot of flexibility when it came to figuring out which color combinations would be good against their opponents. Rob, for example, dipped into red in order to draft Magistrate's Veto. He later got a second Veto and Finkel's blue/white deck could be in trouble if Rob gets one of those and one or two of his many fatties into play. Your Move Games basic strategy (play 3-color decks in order to maximize both flexibility during the draft and removal in your deck) is reminiscent of the strategy used by Black Ops at the Team Challenge. 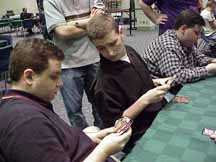 Mostly, Humpherys' deck looked great until Steve got that Massacre. Finkel's deck is solid, but he can't deal with 2 x Blastoderm and a timely Magistrate's Veto could also wreck him. The match-up between Dan's red/black and Darwin's three-color special is a little less clear.

Interesting draft stat: 5 of the 6 players are running black in their deck. 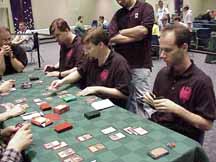 Rob Dougherty destroyed Jon Finkel in two straight. His deck came out fast and Finkel's 1/3 fliers were just outclassed by 3/3 ground creatures and sometimes Blastoderm came out for a few turns of beatings too. They finished quickly and played some fun games while watching their teammates and Dougherty won those too. On the one hand it looked like Dougherty got a little lucky by playing three colors and drawing them, but on the other hand his many single-colored removal spells allowed him to stall long enough to draw, for example, the second Forest he needed to play Blastoderm. Mostly Rob's deck just looked better than Finkel's heads-up.

Steve OMS and Dave Humpherys traded creatures and removal spells for a while in game 1 before the board got thoroughly stalemated. Steve was eventually able to win by using Deepwood Drummer to pump up his Rathi Intimidator turn after turn so it could attack through Humpherys' Crossbow Infantry. Humpherys tried an alpha strike at the end with Dark Triumph in hand, but Steve blocked correctly and Dark Triumph wasn't able to steal his victory away. Game 2 once again bogged down, but Steve made excellent use of his cards. His Spidersilk Armor allowed his Intimidator to recruit an early Spiteful Bully that could just deal 3 damage to itself each turn. It also allowed the Intimidator to attack through Crossbow Infantry. Humpherys managed to kill the Intimidator, but Steve used Spiteful Bully to kill Highway Robber every turn so he could get it back using his Undertaker, drain two more life, and then repeat the process. Humpherys couldn't break up that 3-card combo and it carried Steve to victory. That left everything up to Dan and Darwin. 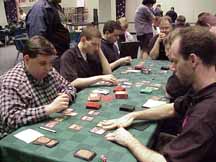 Dan won game one over Darwin thanks to his Cackling Witch/Bog Smugglers combo, but then he blew game 2 in multiple ways. It was a really complicated game so only one of his errors was obvious, but that one was enough: he forgot that the Darwin's Enslaved Horror which he had enchanted with Laccolith Rig could still attack if he didn't leave any untapped creatures to block with. Oops. Dan got away with it though because Darwin never drew land #4 in game 3. Kastle was forced to sit there and discard while Dan attacked with Gerrard's Irregulars.

Team Antarctica advances to the finals.