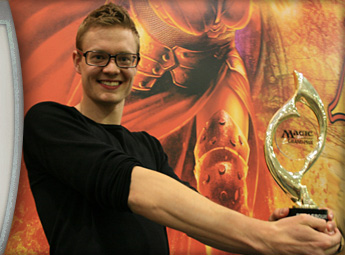 Join the main tournament and get a cool foil Primeval Titan promo card! But the fun doesn't stop there – a side-event schedule running Friday-Sunday offers many other opportunities to win great prizes, and you can also meet Magic artists Mark Poole and Rob Alexander and get your cards signed.

Strasbourg is mainly known as the official seat of the European Parliament. This city in eastern France is quite close to the border with Germany, and easy to reach from both countries. It's the ninth-largest metropolitan area in France and hosts the largest University of France. Strasbourg's historic city centre is UNESCO World Heritage, providing a compelling site to visit should your attention turn away from Magic.
Discover Strasbourg at Wikitravel.

Sleep-in registration: If you register with sleep-in, you have to send your decklist by e-mail to decklist@tournamentcenter.eu before Wednesday April 10, 20:00. If we don't receive your decklist or if it contains errors, you will be subject to the appropriate penalties (such as a game loss). At the event, you just have to go to the Side Events Stage before the start of your round, to hand in your Media Publicity Form, and to collect your participation foil.

The main tournament at Grand Prix Strasbourg is open to Magic players of all ages.

Judges
The Regional Judge Coordinator is Alexis Rassel. Judges interested in working at this event should submit an application through the ( Magic judge website ).

Mark Poole
Mark Poole graduated from the University of South Carolina with a Bachelor of Fine Arts and Design degree. Besides his job as illustrator, he's a professional bass player with the band Albion. He has done work for a multitude of gaming companies. He was one of the original illustrators for the first set of Magic: The Gathering, painting 26 cards for the Alpha set, including 3 different Island pictures. He's most recognized artwork is definitely Ancestral Recall.

Rob Alexander
Rob Alexander is an illustrator and concept artist working in the publishing, magazine, computer gaming, and collectable card game markets. He’s been a professional illustrator for the past 20 years. He has a very high work ethic, and brings a high level of professionalism and dedication to each and every job. He offers a unique vision and perspective to every artwork he creates.

Check the travel information from the venue here.
www.strasbourg-events.com/uk/Easy-access-270.html

Strasbourg has its own International Airport (Strasbourg-Entzheim Airport), only 20 minutes from the venue. Besides the airport in Strasbourg, you can fly to Zürich or Frankfurt (2 hours away by road), Basel-Mulhouse (1hour, 15 minutes) or Baden Airpark (45 minutes).
www.strasbourg.aeroport-voyages.fr
www.frankfurt-airport.de
www.euroairport.com