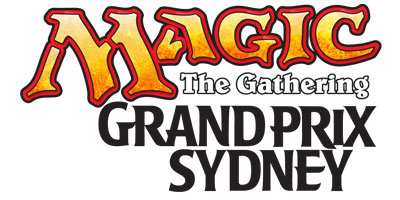 Sydney is a world-famous city due to the beautiful harbor. Come and check out the Sydney Opera House, the Sydney Harbor Bridge, and of course famous beaches including Manly and the iconic Bondi beach. And that's just the stuff you read about in the tour guides!

The Grand Prix will be taking place in the heart of Sydney Olympic Park, which is a 25-minute train ride from the Central Business District. Grand Prix Sydney 2014 is being held at the Howie Complex, 1 Showground Rd. Sydney Olympic Park is where the 2000 Olympics were held and is surrounded by hotels and restaurants. You can check out the Olympic Rings and the flame that was lit by Cathy Freeman. Who will get the Gold at Grand Prix Sydney 2014?

Grand Prix Sydney is the first time Australia has a Core Set sealed deck Grand Prix. With a US$35,000 purse and a minimum of four Pro Tour invites up for grabs, you can be sure that competition will be fierce—but don't worry, we will have the best judges around keeping everything in order.

Running right alongside the Grand Prix is a huge side events schedule including Foiled Again, Bounce Back and the Super Sunday Series, plus events on-demand, two artists, and a whole lot more. There really is something for everyone at Grand Prix Sydney!

Are you going to Grand Prix Sydney? Tell your friends by joining the Facebook Event! 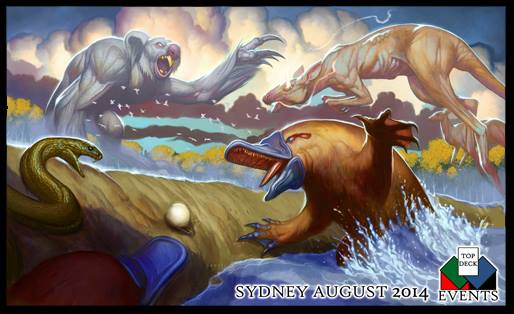 This special commemorative playmat with art by rk post will be available for select players at the Grand Prix!
See www.topdeckevents.com for details.

The main tournament at Grand Prix Sydney is open to Magic players of all ages.

The Head Judge for this event will be Jason Lemahieu (Level 5, USA). If you wish to judge the event, please apply using the Judge Center.

Along with the main event, there are additional side-event tournaments to play in at a Grand Prix. Listed below are the side events offered at all Grand Prix on Friday, Saturday, and Sunday. Additional events and a full schedule can be found on the Top Deck Events website. All side events (except casual events) will have a Planeswalker Points multiplier of 3x.

Saturday
"Rebound" Event
Format at organizer's discretion. The winner(s) earn free entry into the "Super Sunday Series" (see below). Players who also played in the main Grand Prix tournament will get a discount for entry.

Steven Belledin was raised in Pennsylvania and started his career completing high school art assignments for his older sisters in exchange for enough money to buy more candy than he probably should have eaten. After high school he fled small town life to hide among the drones of New York City and become an oil painter and the worst Magic player even known to man. Four years later, he stumbled out of the gates of Brooklyn's Pratt Institute into the harsh light of the "real world" and immediately dove head first into the brick wall of illustration. Though it took him a couple years to recover, he finally began plying his trade in 2000. After several years of slogging through many assignments, he somehow managed to get his foot in the door at Wizards of the Coast when he was asked to contribute work to Dungeons and Dragons 3.5. This eventually got him noticed by the fine folks working on Magic: the Gathering, a game he has been regularly working on since Coldsnap in 2006. Today, he continues to plod ahead; tickled that he gets paid to do something he loves. Steven currently resides in Seattle, Washington, USA, peering out at the world between the curtains in his studio windows. One wife; no pets.

rk is a huge fan favorite, as his work ethic is second to none. rk loves altering cards and having a chat. What will you get rk to do?

Although trading is both allowed and encouraged, please note that the following things are not permitted at this event:

Getting to Sydney
Flying is the most convenient mode of transportation for most visitors traveling to Sydney but this majestic city is accessible by train, bus, or ferry from most anywhere. Internationally, more than 20 international airlines serve Sydney’s International Airport which is conveniently situated about 20 minutes from the centre of Sydney.

Getting to the Venue
The Howie Complex is located in Sydney Olympic Park. It is a 5-minute walk from Olympic Park train station. The easiest way to get to the venue is from Train. However, there is a car park if you wish to drive, available for $20.00 a day.