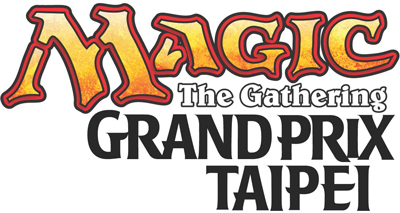 elcome to Taipei! Situated at the northern tip of Taiwan, Taipei is the political, economic, and cultural center of Taiwan. Besides being known for its various thriving shopping and entertainment areas and many night markets featuring gastronomic varieties of local eats, Taipei is rich in beautiful ornate temples and maintains an extensive system of parks, green spaces, and nature preserves. Taipei is also home to Taipei 101, a 101-floor landmark skyscraper that claimed the title of world's tallest building when it opened in 2004, a title it held for six years.

Grand Prix Taipei is open to the public and all players are invited to participate. Taking place only a week after the release of Magic 2015, there is no better way to 'Hunt Bigger Game' than Grand Prix Taipei! In addition, the side event schedule will be jam-packed with exhilarating events with multiple formats. With Planeswalker Points multipliers of 8x for the main event and 3x for all side events, there is no better way to chalk up those Planeswalker Points! A Sleep-In Special will be available (for a fee) allowing players with byes to have more snooze time on Saturday. Local and international dealers will be on hand, whether you are searching for that elusive card for your Commander deck or looking to barter or offload your cards.

Register for the main event and receive a Grand Prix Taipei exclusive playmat by Winona Nelson (while supplies last).

Come on down to Grand Prix Taipei for a fun-filled, amazing and unforgettable weekend of Magic!

The main tournament at Grand Prix Taipei is open to Magic players of all ages.

Judges
Edwin Zhang will be the head judge for Grand Prix Taipei. Judges wishing to apply for this event should do so through the Judge Center.

Along with the main event, there are additional side-event tournaments to play in at a Grand Prix. Listed below are the side events offered at all Grand Prix on Friday, Saturday, and Sunday. Additional events and a full schedule can be found on the www.playeventsasia.com website. All side events (except casual events) will have a Planeswalker Points multiplier of 3x.

Winona Nelson
Winona Nelson is a freelance illustrator, working in science fiction and fantasy, video games, trading card games, and comics. Find out more about her works at www.winonanelsonart.com.

Anthony Palumbo
Anthony Palumbo is an illustrator and gallery artist. His art has appeared on book covers, trading card games, and video games. Find out more about her works at www.anthonypalumboillustration.com.

Taipei Expo Park is located right next to Yuanshan Metro Station on the Tamsui-Xinyi Line (red).

Travel information to the venue for both domestic and international travelers:
www.taipei-expopark.tw/english/archive.aspx?uid=155