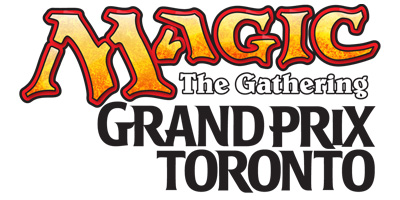 The Toronto Magic community is pleased to welcome Magic players from around the world this December. Join us in Canada's cultural capital Toronto, Ontario for a Modern format Grand Prix, where cards from every set since Eighth Edition and Mirrodin will appear on the battlefield. The Toronto Congress Center is a stone's throw from Pearson International Airport, perfect for those players arriving by air.

The event will feature promotional items (playmats, foils), a full slate of side events, vendors, artists, and everything else you've come to expect from a modern Grand Prix. And when the cards are put away, the city offers amazing food, beautiful sights, exciting night life, and a host of other amenities.

Format: Modern
Participation Fee: $40 CAN (Note that tournament fees are in Canadian dollars. A service fee will be levied to players paying in US dollars).

The main tournament at Grand Prix Toronto is open to Magic players of all ages.

Judges
The Head Judge for this event will be Cristiana Dionisio. The window to apply for judge sponsorship is closed.

Visit the Westcan Events site for a complete listing of all public events.

Raymond Swanland, Anthony Palumbo, and Winona Nelson will be in attendance at Grand Prix Toronto.

Detailed travel information to the venue can be found here.

Grand Prix Toronto is brought to you by the dynamic duo of Mike & Jason of Mike & Jason Events. For additional information, please contact (you guessed it) Mike or Jason:

For information about the venue, contact the Toronto Congress Center at 1.416.245.5000 or gem@torontocongresscentre.com.