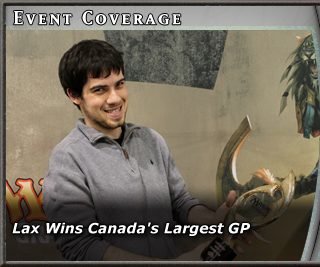 Toronto, Ontario—Canada's largest city—is the last of three Canadian Grand Prix in 2013. With the new Theros set on display in Sealed Deck and Booster Draft play in the main event plus a large number of side events throughout the weekend— including on Friday—Grand Prix Toronto could indeed set an attendance record for a Canadian Grand Prix.

Located at the International Center (a stone's throw from Pearson International Airport), travelers will have no difficulty getting to the venue. Numerous renovations have been done to this modern facility in recent years, and we're excited to see Magic return to this location.

In addition to a challenging Sealed Deck/Booster Draft main event, the weekend offers something to appeal to Magic players of every taste and ability. It doesn't matter if you're coming for just a couple of hours or committed to the entire weekend, Grand Prix Toronto has something for you. The schedule features such events as constructed tournaments offering major prizes and casual Two-Headed Giant and Commander formats, culminating with the increasingly popular Sunday Super Series, That tournament offers a trip to Seattle to hobnob with the folks from Wizards of the Coast next February! Visit www.westcanevents.com for a full side-event schedule, as well as a list of vendors, artists, and additional info.

The Magic: The Gathering Grand Prix tournament series is a great reason to step up your game, catch up with old friends, meet some new ones, and play Magic. Grand Prix tournaments are world-wide open events that allow all Magic players to participate and experience the thrill of a large-scale competition. In addition to cash prizes, a high Planeswalker Points multiplier, and exclusive foil promo cards for participants, the Grand Prix features a host of other activities, including side events and artist signings. Find out more about the Grand Prix tournament schedule here. 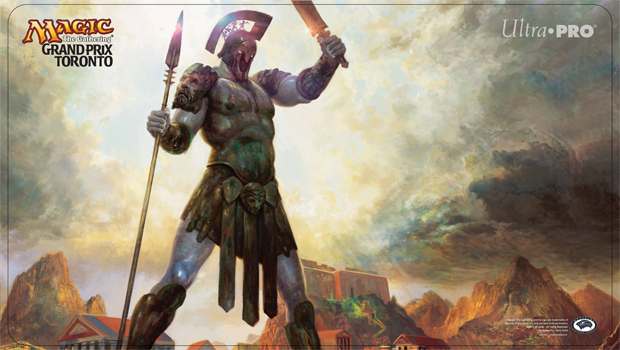 The first 750 registered players in Grand Prix Toronto will receive this Colossus of Akros playmat (while supplies last).

The main tournament at Grand Prix Toronto is open to Magic players of all ages.

Judges
The head judge is Scott Marshall. Certified judges interested in working at this event should submit an application through the Magic judge website.

Chris Rahn, Zack Stella, and Noah Bradley will be in attendance at Grand Prix Toronto.

Online preregistration, Sleep-in Specials, and VIP Service will be offered for this event. Visit the Alberta Premier Events website for full details.

Arriving by air:
Toronto Pearson International Airport (YYZ) is a 10-minute cab ride from the venue.