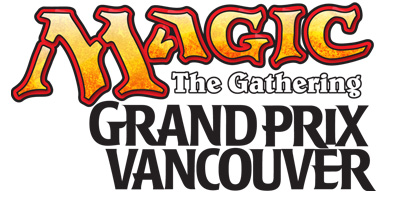 The Vancouver Magic community is pleased to welcome players from around the world this June. Join us in scenic Vancouver, British Columbia for an early summer Grand Prix, where angels and demons will clash on the battlefield over two days of Avacyn Restored Limited play. The Convention Center is located in beautiful downtown Vancouver, directly on the harbour.

The event will feature promotional items (playmats, foils), a full slate of side events, vendors, artists, and everything else you've come to expect from a Grand Prix. And when the cards are put away, the city offers amazing food, beautiful sights, exciting night life, and a host of other amenities all within close proximity to the venue and nearby hotels.

Format: Avacyn Restored Sealed Deck / Booster Draft
Participation Fee: $40.00 CAN (Note that tournament fees are in Canadian Dollars. A service fee will be levied to players paying in U.S. Dollars).

The main tournament at Grand Prix Vancouver is open to Magic players of all ages.

Judges
The Head Judge for this event will be Cristiana Dionisio. To volunteer as a judge for this event, please log in to DCI Family, and apply to the GP Vancouver Judge staff under the Events tab. Applications for sponsored judges close on March 28, and for volunteers on April 30.

Visit the Westcan Events site for a complete listing of all public events.

From Vancouver International Airport [YVR]:
One of the legacies from the 2010 Winter Olympics in Vancouver is the "Skytrain - Canada Line" - an elevated light rail transit directly from the YVR International Airport to the downtown core of Vancouver that connects to within 1 block of the event site. Most arrivals at the airport can use this option as it is fast, direct, and very affordable ($5). Fare for a cab is about $30 from the airport to the downtown core and Convention Center area.

From Bellingham International Airport [BLI]:
Travellers from the USA may find airfare to Bellingham and rental car cheaper than flying directly into Vancouver. If flying in from the USA you should also investigate flying to Bellingham + rental car for your travel plans. Bellingham is about 20 minutes south of the Canada-USA border on Interstate 5/I-5.

By Car
From the south:
Continue North on I-5 toward the Canada-USA border.
Take SR-543 (Truck crossing) and cross into Canada.
Continue north on Highway 15/176 street until you reach Highway 1 (a 10 minute drive).
Head West on Highway 1; it will take you right into the downtown core of Vancouver.

From the east:
Follow the signs for Highway 1 - it will take you right into the downtown core of Vancouver.

For information about the venue, contact the Vancouver Convention Center at 1.866.785.8232 (toll free) or info@vancouverconventioncentre.com.