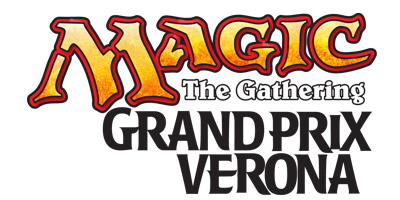 Verona is the capital of the similar named province in the region Veneto, in the north of Italy. The inner town is protected by UNESCO as World Heritage, and is known for its charming squares and fancy shopping streets. But Verona is also the city where Romeo met Juliet, and where you find the third-biggest amphitheatre in the world!

Sleep-in Registration If you register with sleep-in, you have to send your decklist by e-mail to decklist@tournamentcenter.eu before Wednesday March 6, 20:00.
If we don't receive your decklist or if it contains errors, you will be subject to the appropriate penalties (such as a game loss). At the event, you just have to go to the Side Events Stage before the start of your round to hand in your Media Publicity Form, and to collect your participation foil.

The main tournament at Verona is open to Magic players of all ages.

Players must have a signed publicity release form to be included in Wizards of the Coast's official online event coverage. Forms can be downloaded here (15k PDF) and will be available onsite. Minors must have a parent or guardian's signature on this form. Publicity releases will be handed out and collected during the players meeting on Saturday morning.

Judges
The Head Judge for this event will be Carlos Ho. The Regional Judge Coordinator is Cristiana Dionisio. Judges interested in working at this event should submit an application through the Magic judge website .

Along with the main event, there are additional side-event tournaments to play in at a Grand Prix. Listed below are the side events offered at all Grand Prix on Friday, Saturday, and Sunday. Additional events and a full schedule can be found on the Dazzle Events website. All side events (except the Last Chance Grand Prix Trials) will have a Planeswalker Points multiplier of 3x.

Trading
Although trading is both allowed and encouraged, please note that there are some rules:

Failure to obey these rules may result in all involved parties being removed from the event without refund and banned from attending future Grand Prix in Europe.

Come and meet Magic: The Gathering artist Karl Kopinski during the Grand Prix.

Karl Kopinski
Born and raised in Nottingham, England, Karl Kopinski has been drawing basically since he was able to hold a pencil. From an early age he drew pictures of Tarzan (never with nipples though!) Spider-man, Batman, Robin Hood (of course) and Space: 1999 (shows how old he is!), among many others. He went on to study fine art at university where none of his tutors recognized nor seemed remotely interested in his ability and love of painting. He worked for Games Workshop's monthly comic, and after seven years and far, far too many pictures of space marines, he took the leap into the unknown that is the freelance world and hasn’t looked back since.

Discover Verona at Wikitravel. Check the travel information from the venue here.