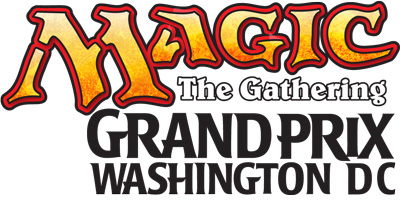 The Dulles Expo & Conference Center overlooks the Nation's Capital. What more appropriate place is there to host this year's Legacy Grand Prix and enjoy the full range of Magic's most diverse format?

Grand Prix Washington D.C. is an event not to be missed just because you don't have a Legacy deck. Our side event schedule will be full of exciting events for seasoned and newer players alike. Ask about the PAX EAST Challenge. We also will have a tremendous array of dealers on site. Longtime favorite Magic artists Rob Alexander and Eric Deschamps will be on hand to add to the flavor of a true Legacy weekend. The first

The tremendous hotel blocks we have worked out can't be beat. Inexpensive hotel rooms close to both the Dulles Airport and the Dulles Expo Center have free shuttles and some feature free breakfast.

The main tournament at Grand Prix Washington D.C. is open to Magic players of all ages.

Along with the main event, there are additional side-event tournaments to play in at a Grand Prix. Listed below are the side events offered at all Grand Prix on Friday, Saturday, and Sunday. Additional events and a full schedule can be found on the TJ Collectibles website. All side events will have a Planeswalker Points multiplier of 3x.

Prominent Magic artists Rob Alexander and Eric Deschamps will be on hand for free signings of your favorite cards, plus you'll have the opportunity to buy prints and even original artwork.

Travel by Car
The event site is 17 miles west of the Washington D.C. Beltway. From I-495 take I-66 West to exit 53B - Virginia Route 28 North. Keep right at the fork and merge onto Route 620/Sully Rd/VA-28 North. Travel 3 miles and then Turn Right on Willard Road. The Dulles Expo Center is on your left. Please note that traffic is a big factor throughout the metropolitan area. Accordingly, 30 minutes traffic-free becomes 60 minutes when traffic peaks.

Travel by Plane
Dulles International Airport (IAD) is 8 miles (15 minutes) from the event venue. All hotels recommended on this fact sheet offer free shuttle service to and from the airport, as well as between the hotel and the event venue.

Reagan National Airport (DCA) - 30 miles from event venue. Public transportation available for $7 via Metro Rail with a transfer to the Fairfax Connector Bus. From the airport take Metro Rail's Blue Line (direction - Largo) until you reach the Rosslyn rail station. Transfer to the Orange rail line (direction - Vienna/Fairfax). Exit at the Vienna/Fairfax Station and transfer to the #650, #651, or #652 Farifax Connector Bus. Ask the driver to drop you off at "Sullyfield Circle & Westmoreland St.". Walk .3 miles South on Brookfield Corporate Drive. Turn Right on Chantilly Shopping Center Road. The Dulles Expo Center is on your right. Another transportation option is Washington Flyer Super Shuttle Shared Ride from airport to event venue - $30.

Travel by Train
Amtrak depot, Union Station in Washington DC. - 30 miles from event site. Public transportation available for $8 via Metro Rail with a transfer to the Fairfax Connector Bus. From Union Station take Metro Rail's Red Line (direction - Shady Grove) to the Metro Center rail station. Transfer to the Orange rail line (direction - Vienna/Fairfax). Exit at the Vienna/Fairfax Station and transfer to the #650, #651, or #652 Farifax Connector Bus. Ask the driver to drop you off at "Sullyfield Circle & Westmoreland St.". Walk .3 miles South on Brookfield Corporate Drive. Turn right on Chantilly Shopping Center Road. The Dulles Expo Center is on your right.

Most who travel to Washington D.C. visit the Smithsonian and other museums, the many memorials, monuments, parks... there's a lot to choose from and much of it is free!