Bennie Smith began playing Magic in 1994 and started writing about it shortly after. A Virginia State Champion, he enjoys few things better than winning at tournaments with home brews. Bennie has a weekly column on StarCityGames.com. He also recently published The Complete Commander. Follow him on Twitter, on Facebook, and the occasional Commander games on Magic Online under the handle "blairwitchgreen."
Share Article
Share Tweet Share

project I had percolating for this column at some point this summer was to do what I was calling a “big links” piece, where I would compile a sort of “one-stop shop” of handy links for Magic Online-related stuff. Unfortunately my time writing this column is coming to an end and I'm not going to have time to do the full-blown version, but I did put together some handy links to reference material gathered in my column during my tenure. My goal was to make this a good page to bookmark to find Magic Online information; many of the linked articles also include further links to “drill down” for additional information. I was especially interested in compiling a list of the more useful “Tips and Tricks” over the past year or so.

If you've got some other links you consider “vital” to your Magic Online experience, please post them in the forums as an expansion of this list! 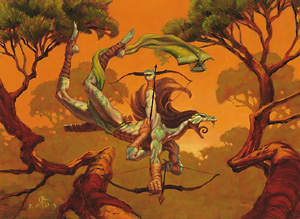 This past weekend we finally got to see a big 4x event running the new Tribal Wars Standard without Jittes, and the Top 8 showed a nice variety of deck archetypes. Snakes ruled the roost, taking three spots with one actually winning it all (though the waterdog informed me he got lucky beating the Stompy deck). Nipping on their heels (er, if snakes had heels) were two Elf and Spirit decks. One Elf deck went for beatdown, with quick elves and an avalanche of enhancers—Giant Growth, Blanchwood Armor, Moldervine Cloak and even Might of Oaks! Elvish Champion was a nice metagame bomb, punishing popular Snake and Greater Good decks for running Forests. The other Elf deck was primarily concerned with accelerating into big bombs like Meloku, Kiega, and Simic Sky Swallower.

The spirit decks were also quite different, with one playing Greater Good with Kamigawa Dragon spirits (a popular choice); the other went the Reanimator route, setting up Splice onto Arcane to recur Goryo's Vengeance for big beaters like Kuro, Pitlord. Lastly, it was nice to see Humans get in on the action, Orzhov style, running Dark Confidant and Teysa, Orzhov Scion.

Christophe Gregoir (A.K.A. XofG) had some thoughts on his deck and the metagame: “This deck is supposed to be Elves, but to be honest, 16 of them are just mana accelerators for the fatties. The Civic Wayfinders were horrible, and definitely need to be replaced, maybe by Elvish Champions, who seem really good since half the decks in the field are playing green. The deck ramps up in mana thanks to the Elves and then wins with one of the fatties, Meloku, Sky Swallower or Keiga, sometimes with an early Kudzu. The two most prominent decks in the tourney were U/G Snakes and G/W/B Spirits, and while the Snakes match up is pretty even, it's pretty much impossible to beat G/W/B Spirits. Luckily, I never faced that deck all tourney. The deck does have a good match up against the lesser-played tribes, such as humans and knights. The only thing wrong with the deck is that it has very little disruption, with no removal whatsoever and only four counters. You're basically doing your own thing and hoping your opponent doesn't have much.”

It's a Free For All!

As I'm winding down writing for this column, I wanted to hook up with the Sunday FFA crowd for one final run with my Kiki-Jiki deck (see Kiki-ing the FFA for last time). To gain maximum Kiki potential, I went nuts with the creatures last time and didn't have enough reactive stuff, particularly permission and ways to stop the bone-crushing combos that often end these multiplayer games with a flourish. This time I was determined to be “answer man” if need be.

I figured Time Stop would be an invaluable weapon in this format, capable of shutting down a lethal Storm, Kokusho triggers on the stack, and an ill-timed (for me) Obliterate. I'd also add the generally incredible Remand to the must-play Mystic Snake, giving me a pretty good permission suite. Naturalize and Indrik Stomphowler would give me some good artifact and enchantment control. The rest of it is pretty much standard Kiki-Jiki fare… with two copies of one notable exception.

I get the kids down for a nap after letting them play outside in the pool under the hot July sun, secure in the knowledge that I've got a couple hours for multiplayer madness. I just hope I can advance past the first table this time.

My tablemates are Musteval, Boreddawg, Optimus Wins, and reckless intent. I start off pretty well, but then we find out the game was not set up correctly (the default for multiplayer game is Attack Left, and FFAs are… well, free-for-alls, meaning you can attack whomever you want). We restart, go through a big deck mulligan, and I start to F4 through everyone's initial turns... and accidentally F4 through my own turn—D'OH! Forced to discard at the end of my turn, I bin Indrik Stomphowler, and begin to joke with Musteval about playing Stomphowler Reanimator. My hand is still not bad and even though I'm behind I start to develop decently. 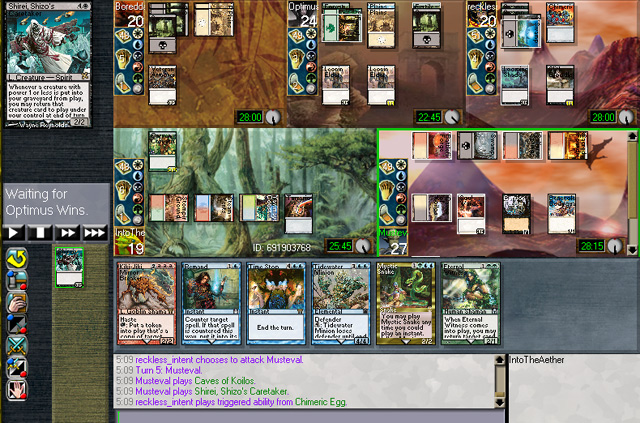 Until Musteval drops Shirei, Shizo's Caretaker with a bunch of one-power dudes out, including a Carrion Feeder and Goblin Sharpshooter, which is very bad news for us. What's highly aggravating to me--look at my board and hand—if I had not been a bonehead and hit F4 to skip my first turn, I would have been untapped and possibly have drawn a fourth land and be able to Mystic Snake the Shirei. A fifth land and Kiki would have hit and set up a free Snake counter per turn. As it is, Musteval begins to go off and Optimus Wins concedes. I ask Musteval if his combo is infinite and he says no… and when the smoke clears he's at 50 life and I'm at 6. I untap and glare at my too-late Snake, but then Boreddawg comes to the rescue with Final Judgment of all things, removing all creatures from the game! My hero!

The Chimeric Egg (quite a nice multiplayer card!) reckless intent has in play whistles quietly at the Judgment blowing by, and then proceeds to go to work on Musteval's fat life total. For spite, I Mystic Snake Musteval's top-decked creature, and follow it up with a Carven Caryatid and then Kiki-Jiki. Boreddawg checks me with Royal Assassin, which certainly puts a kink in my fiendish plans. 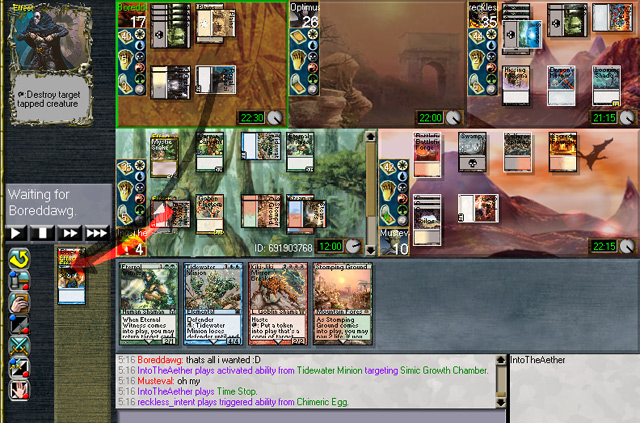 Boreddawg eventually plays Blazing Archon, which prompts me copy the Mystic Snake, since I cannot win if I cannot eventually attack. This was obviously bait to enable the Assassin to stick a knife into my poor Goblin legend, but I had an ace up my sleeve—good ol' Time Stop, which shut that stack right down.

Meanwhile, reckless intent takes down Musteval with a relentless Egg assault, and heartless multiplayer bastard that I am, I repay him with a Stomphowler for his Egg. I need to end the game soon because I'm low on the clock and my win is very click-intensive, and Stomphowler will help do that. 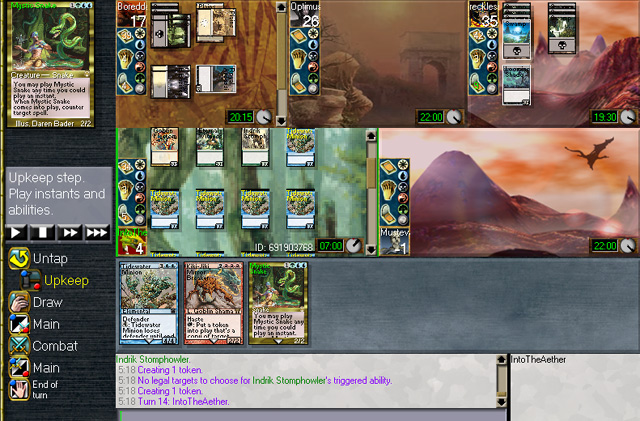 After reckless intent's end of turn effects go on the stack, I tap Kiki to copy Tidewater Minion. Boreddawg's e-vile Assassin takes aim at Kiki's kidney. I use Tidewater Minion to untap Kiki with the deathblow on the stack, and tap Kiki to copy the Minion again. With the new hasty copy I untap Kiki and do it again, and again, and again… until there are a bunch of Minions in play when Kiki finally dies.

On my turn I play my second Kiki and tap it to copy Stomphowler. Then I untap Kiki with a Minion token, and tap Kiki to copy another Stomphowler, basically trading in my 4/4 defenders for enough 4/4 beaters to take down reckless intent and untap my lands in order to cast Mystic Snake and also untap Kiki to copy it if I have to, figuring he may have a Wrath of something heinous. He simply plays a few chump blockers and kills my Stomphowler with his Assassin, making my clickety work twice as hard (2/2 Snakes instead of 4/4 Beasts) with rapidly dwindling time.

I manage to win by swinging with 12 or so Snakes and everything else with less than 30 seconds on the clock. Whew! 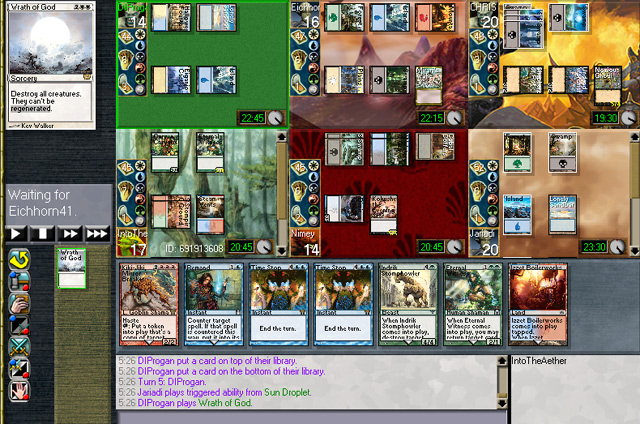 It quickly becomes apparent there are some very scary decks around the board; CHRIS WHEATLEY is playing Zombies, Nimey's running Cabal Coffers and Kokusho, and Eichhorn41 is with Mirari's Wake. When he drops a second Wake, I figure we're all just dead, but he uses the extra mana instead to hard-cast Decree of Pain.

On my turn, I drop a Stomphowler and target Nimey's O-Stone in order to force him to go ahead and get rid of the Wakes. He's not real happy about that, but I don't really have any other plays since I don't have six mana yet for Time Stop. 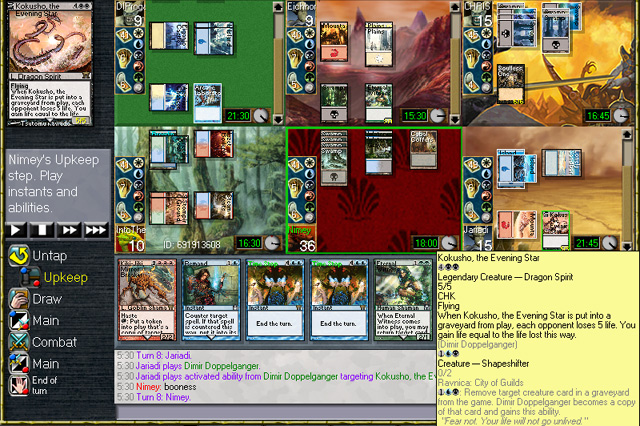 Sadly, it's my final play. Jariadi drops a Dimir Doppelganger, who happily transforms into the Kokusho in Nimey's graveyard. Nimey then plays his own Kokusho. I'm at 10 life. Bye bye, intotheaether. Nimey goes on to win the table by playing another Kokusho and when that dies, he casts Bidding to bring two copies back into play and it's game over. Where is Rain of Gore when you need it?

I'd like to thank the fine folks running these FFAs for another great time! While my meager personal collection will likely prohibit me from playing in the Extended FFAs, I may be able to cobble something together for their off formats like Standard sometime in the near future. I'm definitely looking forward to it.

Next week is my final shot here, we'll talk about the impending release of Coldsnap for Magic Online and take a look at the Coldsnap avatars. See you then!