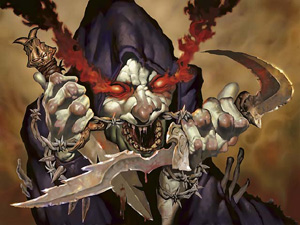 to Rakdos Week! The last of the Guild theme weeks, this one features the most sinister Guild of them all (if you don't count the Orzhov, the Dimir, or the Simic). The Rakdos are pretty hard to pin down (and torture), but one thing is for sure: they have a bad attitude. Some might go so far as to call the Rakdos nihilists. Say what you like about the tenets of the Selesnya Conclave, at least it's an ethos. Of all the ethos' they don't have, the one furthest from Rakdos minds is “Safety First.” Rix Maadi, the underground “palace” that the cultists call home, makes the Temple of Doom look like the Four Seasons. “To your right, you'll find the world-famous Wall of Skulls. To your left is a fountain spouting liquid-hot magma. Check-out is at noon, unless we decide to murder you in your sleep for fun.”

Furthering their total disregard for safety, many of the cult members' clothes have knives on them. One cultist goes so far as to wear something called a “kill-suit.” The sewing of said suit resulted in the untimely deaths of thirty-four Rakdos tailors and one concerned Goblin parent, who ill-advisedly told his son, “You're not leaving the house dressed like that,” before being impaled on his son's cuff-links. That's some dangerous attire, and I haven't even talked about the Serrated Socks or the Bonnet of Blades.

When they're not playing board games like Scrabble (to Safety) and Sorry! (I Killed Your Family), the Rakdos cultists keep themselves busy with “unspeakable tortures” using such diabolical devices as the Wheel of Misfortune, the Quiet Riot, and, of course, the agonizing Bed of Puns. (“Hey, Jim, you're lookin' sharp today!”) At their annual festival, the Wrecking Ball, the boy goblins and the girl goblins stand at opposite ends the dungeon, too nervous to ask someone to torture.

The Cult freely mixes business with pleasure, and, as a result, has a pretty high turnover rate for employees. How could you not, when the President of the organization is a Demon, and the Vice President is a Witch? Personally, I'd be hesitant to apply for a position at a company whose leader has “The Defiler” as his job title. At least he doesn't have a trident.

Hellbent, their signature mechanic, is all about buying now and paying later (or maybe it's the other way around). Basically, they're like a furniture store. But evil. They live way beyond their means and there's certainly no saving for the future. I imagine that Rakdos himself lives paycheck to paycheck and probably has maxed out all of his credit cards. “Live fast, die young, and leave a bloodied, mangled corpse,” he might say after watching the Ravnica-equivalent of a James Dean movie-marathon. My point is, thirty years from now, these guys won't be sitting around on their front porches, rocking in rocking chairs, talking about their retirement plans. That's because they will most likely be dead by that point, probably because their rocking chairs have knives on them.

My Life with the Rakdos

If there's one thing that the Rakdos can really get behind, it's pain. It should therefore come as no surprise that one of the R/B gold cards from Dissension is all about taking pain and magnifying it. I'm talking, of course, about the aptly named Pain Magnification. If taking a Volcanic Hammer to the nugget isn't injurious enough, your opponent will have to face of the insult of discarding a card on top of that! Suddenly, all of your burn spells are little Mind Peels as well.

You'll want to get a Pain Magnification on the table as soon as possible so that every subsequent burn spell will cause discard. Both the Red and Black Onslaught Chain spell (Chain of Plasma and Chain of Smog) allow you to hurt your opponent's hand, more so if they decide to Chain the spell back to you. Not only will they lose more cards, or take another three damage, but you can even discard one of the Madness spells (Fiery Temper or Violent Eruption) to cause even more pain!

When your opponent gets down to a mere two cards in hand (or less), Lavaborn Muse really puts the boots to him. It's hard to come back from there, since the Muse will deal three damage to your opponent during his or her upkeep which will cause another discard if you have Pain Magnification on the board. Playing Hellbent can be fun, but not if your opponent put you in that position and won't let you out of it.

Hold Me, Thrill Me, Kill Me, Keep Killing Me 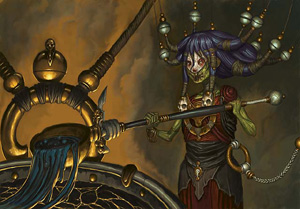 If the Rakdos like anything besides pain, it's tapping. Turning sideways is one of the particular kinks of the Rakdos Cult. They can be straight-up nasty, but when they're sideways they're even nastier. Just look at some of the cards: Rakdos Augermage, Rakdos Ickspitter, and the ever-adorable Ragamuffyn, whose cousins, Street Urchyn and Whippyrsnappyr, were cut from the set during development. If you're a Rakdos-aligned creature, and you don't have a nifty tap-ability, have no fear! Rakdos Riteknife is here! It does the usual slicing and dicing, but it also comes in handy when you want to sacrifice one of your friends on the altar of a Demon!

To complement all this creature-tapping, I turned to another Dissension card, Magewright's Stone. Now you can get double use out your tapping creatures, which not only includes the trio I mentioned above, but also Ravnica's own Helldozer and 9th Edition's Lord of the Undead (who can raise a number of creatures from the dead, including Rakdos Guildmage and Crypt Champion). Ragamuffyn and Rakdos Riteknife are big on having you sacrifice your own creatures, and that augurs well for the Grave Pacts in the deck.

Aficionados of Standard Tribal Wars might notice that, except for Rakdos Ickspitter and Rakdos Augermage, each creature in the deck is a Zombie. In fact, I've been goofing around with a Zombie deck very similar to this one. The key differences are the addition of Nantuko Husk and Festering Goblin over the aforementioned duo. With fewer creatures with tap abilities, I changed the Magewright's Stones to Wrecking Balls, and then cut the Riteknifes for Rakdos Signets. Grave Pact is still the key card, and is a complete, er, wrecking ball when combined with Nantuko Husk.

Coldsnap brings with it a bunch of neat new zombies. Haakon, Stromgald Scourge and the so-called “jump knight,” Stromgald Crusader, are particularly appealing. Stay tuned in the coming weeks if you're interested in post-Coldsnap Standard Tribal Wars!

If there's anything the Rakdos like, other than pain and tapping, it's being Hellbent. In order to find yourself in such a state, you have to empty your hand. There are a number of ways to accomplish this, several of them not coincidentally provided by the Rakdos themselves. Avatar of Discord (which cord?) forces you to discard two cards if you want to keep it in play, Rakdos Guildmage allows you to turn cards in hand into mini-Last Gasps, and Jagged Poppet, perhaps the least safe toy in all of Ravnica, will cause irreparable damage to your brain if your opponent so much as breathes on it. Seal of Fire and Frostling are removal spells that you can play without having to worry about finding a suitable target.

Another way to empty your hand quickly is by using Betrayers of Kamigawa's “pitch” spells. The Shoals have an alternate play cost which allows you to remove a card in your hand from the game instead of paying their mana cost. The Poppet and the Pit Dragon (coincidentally, the title of one of Ravnica's goriest fairy tales) are big fans of Blazing Shoal, which can, all of a sudden, enable Hellbent and magnify the pain of the Poppet's super-Specter ability or the Dragon's Double Strike.

The deck is filled with multi-coloured cards, beginning with Gobhobbler Rats and Rakdos Guildmage in the two-slot, Avatar of Discord and Jagged Poppet in the three-slot, and going all the way up to Anthem of Rakdos in the five-slot. This makes it much easier to pay the alternate play cost of your Shoals, since so many of your cards can be pitched to either one of them.

4 Seal of Fire 2 Anthem of Rakdos

Before I go, I'd just like to share a couple things. Last week, I built a handful of decks around Guildpact's Sanguine Praetor. A couple readers, named Dave and Justin B., wrote to me and suggested that I pair Sanguine Praetor with Natural Affinity. With a Praetor on the board, you can use Natural Affinity to animate all the lands in play and then sacrifice one of your own lands to Sanguine Praetor. Since the lands all share a mana-cost of zero, this will destroy all lands in play, with the added benefit of frying any token creatures that happen to be hanging around. End-of-turn Armageddons, while you have a 7/5 monster in play, seem like a good thing to me. I'd definitely try to squeeze some Natural Affinities into either of the B/G Sanguine Praetor decks I wrote about.

In other news, I began last week's article talking a bit about a couple of cards that took me awhile to truly appreciate: Netherborn Phalanx, which was (nether)born to be played with Infernal Genesis, and Champions of Kamigawa's Reweave. Sanguine Praetor is another such card. That was the only (intended) connection I was making. Another reader, James Hill, gave me far too much credit by thinking that I was going somewhere with that. I wasn't, but he decided to go somewhere anyway. His plan was to combine Netherborn Phalanx and Infernal Genesis with Reweave. With a set of Phalanges as the only creatures in the deck, you could, when your opponent had a number of creatures in play equal to his or her life total, turn one of your Minion tokens into Netherborn Phalanx with Reweave, killing your opponent at instant speed. James also suggested that Sanguine Praetor might have a place in the deck as a sort of “panic button,” in case the creature tokens on your opponent's side got out of hand. All of these cards have the added benefit of a high mana-cost, which helps you out-Minion your opponents when you have Infernal Genesis on the table.

Until next time, have fun being heckbent!