e are deep into preview season, and as such, I've decided to take advantage of that by building a deck for the new Standard. I may not have a reputation as a beatdown player, but my greatest tournament finishes have just about all been with attacking decks, so I've attacked for 2 often enough to take a stab at making a sweet Boros deck. 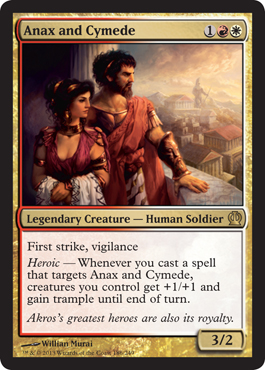 The heroic part of the deck comes from the keyword that bears the name, although that's not all it does. There are a solid ten creatures in the deck that pay you for targeting them, and not an insignificant amount. Favored Hoplite and Phalanx Leader both give +1/+1 counters, the Hoplite only to himself and the Leader to everyone, with the Hoplite providing the side benefit of surviving any combat. At the top end of the heroic squad you'll find Anax and Cymede, a 3/2 with vigilance and first strike that casts a mini-Overrun each time it triggers.

Of course, you don't become a hero without some work, which in this case means the gods (or Aurelia) are willing. Four copies of Gods Willing provide the cheapest and most beneficial way to unlock the hero in each of your creatures, while simultaneously protecting them from harm and letting you filter through your deck. This is a powerful spell, and I'd expect to see it played even in non-heroic decks. Aurelia is also more than happy to forge your creatures into mighty champions, even if it takes a little pain to get there. All of the creatures with heroic give themselves toughness when they trigger, and Favored Hoplite even prevents all damage, so a little ping from Aurelia's Fury won't kill them. Be sure to attack first, otherwise you might find all your Warriors tapped out. Any excess mana can of course be pointed toward your opponent's side of the field, but it's pretty awesome that this powerful spell has the additional mode of pumping your team. Lastly, a pair of Magma Jets can be a last-ditch enabler, although one that's more suited to just killing enemy creatures instead.

Past the heroic part, this deck has many of the trappings of a normal aggro deck. It's got a low curve, good threats, and even more removal. Chained to the Rocks is another extremely powerful card from Theros, and one of the biggest incentives to play red in a nearly mono-white deck. It only takes one Mountain and the fun begins, and giving an aggro deck the tools to exile even the most powerful of monsters is a big deal.

Heliod makes a cameo appearance, too, with two of his Spears and one of him providing a little backup. How the Gods play in aggro decks is yet to be seen, but I like trying new cards when I'm not sure where they land in power level.

The right mix of creatures, heroes, and ways to trigger heroic is something that needs tuning, but I really like the idea of combining aggressive creatures and removal that happen to do great things together.