my sixth turn, I laid out two face down creatures. The opponent smashed me with several creatures. It wasn't enough damage to kill me, but it seemed like the right play to ensure I was dead to an alpha strike the next turn. I didn't block: there was only one way I was going to win this game. He played one post-attack blocker and passed.

I untapped and sent both morphs. With me dead on the board provided he didn't lose to a stupid pump spell after letting all four in, he correctly blocked one of the morphs. Unfortunately for him, he chose which creature to block incorrectly. I flipped Rockshard Elemental and killed him with a giant double-striker. Congratulations to me: Welcome to Day Two.

Was there any way to figure out which morph was the right one to block? Some players maintained during Onslaught Block that players with strong people reading skills could predict which morph was which by the order in which the opponent played them. When Onslaught first came out, Randy Buehler came around to my first draft and told Chris Pikula that morph was a great mechanic that, as a poker player, he should particularly love: morph introduced bluffing specifically to the game.

In the above scenario, I played both of my morphs on the same turn, just sort of slapped them onto the table. Some Goblin Taskmaster didn't get in, but the lethal one did. In a sense, I played exactly the right way: I couldn't win the game in any way but to get my Rockshard Elemental in; my opponent played very nearly the exact right way: he attacked to put me dead on the board the next turn, but just guessed wrong on which incoming morph to block. The moral of the story is that maybe he should have left two guys back to block. I don't recall how a conservative decision like that would have affected the race on board; all I know is that with the "new morph" out of Betrayers of Kamigawa, people will be evaluating their blocking strategies much more conservatively. 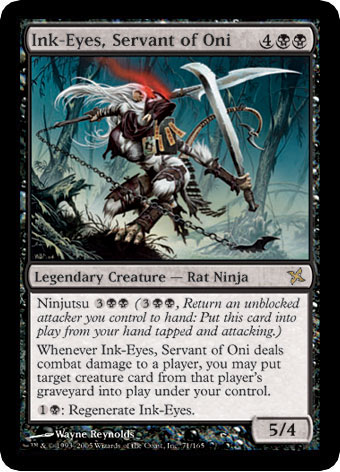 I can't help but think of Ninjutsu as the new morph, though there's a lot more to it than just that.. You can play a card like Ink-Eyes, Servant of Oni at retail and get a decent deal... 5/4 and a tremendous special ability for

isn't anything to write Mom about, but it certainly falls within the realm of reasonable casts (like the direct opposite: a 4/5 Exalted Angel on

). On the other hand, we are usually more than happy to pay seven mana for a card like Exalted Angel because we never have to actually hit six to smash our opponents with her fine 4/5 body. In the same way, we will almost always be paying more than six mana to Ninjutsu out Ink-Eyes, Servant of Oni… and we will be happy to do so.

When we put a "down payment" on a creature with Ninjutsu (like paying the 3 mana for a morph), we often accelerate our plays even though we end up spending more mana than we bargained for. For instance, Red Deck Wins players really like springing Blistering Firecat out of nowhere for a third and more of the opponent's life total, but sometimes they do what they gotta do and lay the creature face down. The Firecat flips, comes in on the same turn four that it would on a hard-cast, loses its haste advantage, and ends up being more expensive at a total of

… but is a rewarding play a surprising amount of the time.

can be a rough cast even for a mono-red decksometimes, and sometimes a player just doesn't hit four mana on turn four. In the same way, seven mana for Exalted Angel can be a lot better than six... think of how dramatic a swing it is to lay down the morph on turn three (turn two in a 2002 Beasts deck!) so that you have that awesome flyer bashing the opponent and picking up four life as soon as the next turn. On a hard-cast, you'll be lucky to hit on turn six. The opponent will know that the Angel is coming and might leave back a flying blocker. It isn't necessarily intuitive, but paying more for a creature than its usual mana cost can many times be the faster option.

With a creature like Ink-Eyes, Servant of Oni, we get an additional incentive to the down payment on Ninjutsu: You see the Legendary Rat Ninja has a spectacular ability reminiscent of a Weatherlight Zombie past. The special ability stapled onto Bone Dancer, a tiny 2/2 Grey Ogre for three mana, was so ferocious that avowed "fatties only" player Jamie Wakefield deigned to play it in his otherwise all giant monsters deck including Gallowbraid, Morinfen, and Necrosavant. Unlike Bone Dancer, Ink-Eyes, Servant of Oni gets to pick which creature she will be stealing, and still gets in for a quarter of the opponent's life total; I'm pretty sure Jamie would like the 5/4 reprint even more than the original.

Along with a great special ability -- not to mention a pretty good body -- comes a dangerous rep. No one is going to let Ink-Eyes, Servant of Oni hit them if they can help it. Chump blocking is probably preferable to letting this particular Rat in... Most of the time, losing a creature has got to be better than facing down one of your own men the next attack. So if you ramp up to six mana for Ink-Eyes, Servant of Oni, don't expect the opponent to welcome her with open arms. If you're going to hit with this thing -- steal that Keiga the Tide Star you worked so hard to kill -- your best bet is to come in sneaky-like.

Remember the story from above? The one where I have two morphs and my opponent plays for the kill instead of leaving two blockers back? If your opponent knows you have good Ninjutsu creatures (or is at least paranoid about the worst case scenario when he has you dead on the next attack), don't expect him to ever be in the position to "guess wrong." There will be no guessing: everybody's getting blocked. So how are you going to get Ink-Eyes, Servant of Oni in?

1. Have more creatures than the other guy. The classic swarm strategy will help you get your Ninjutsu on and your Ninjas' prehensile feet colliding with the opponent's jaw Hi-Yah style. In one sense, little guys will many times get blocked in ugly combat situations, but if you play your cards right with Ink-Eyes, Servant of Oni, you will likely have the two best troopers in play when combat ends.

2. Clear a path, any path. Probably the scariest monster to ever force its way through any mage's defenses was a 1/3 Snake who didn't actually deal any damage unless its controller was overflowing with eight or more cards in hand. Ophidian's masters made sure it connected using everything from Boomerang to Man-o'-War to Floodgate. A lot of the time, the blue mage was dropping cards to get Ophie in, but the snake itself would make up all the card advantage in the world, given time. Think of Ink-Eyes, Servant of Oni the same way. As long as you are burning a path, this scary Rat Ninja will be recouping the card advantage. Remember: Dead enemies equal new friends with this one, so aim for the best creatures first.

3. Play creatures that no one wants to block. The most dramatic example I can think of is Battle-Mad Ronin. No Human Samurai or creature of any other race and class has spurred so much debate in Limited circles as this red two-drop. Both decried as unplayable and lauded as a great curve creature, there is one thing that everyone seems to believe: you really don't want to block it. Or attack into it. The thing about Battle-Mad Ronin is that when you play it, it changes the tempo of the game. If you drop it on turn two, it is very unlikely the opponent sends into it with either turn two or turn three drops. You want to save four damage? Put Battle-Mad Ronin in front of Humble Budoka, or pre-empt Ronin Houndmaster; I guarantee you no one brings on turn three.

Following, Battle-Mad Ronin is basically a free point of damage every turn for the next three or four turns. No one wants to potentially trade a "real" 3/3 with this clunky creature, so after a short tour of duty on defense, he tends to hit. If people are unwilling to block a guy like Battle-Mad Ronin, what are the chances they can prevent you from Hi-Yah'ing Ink-Eyes, Servant of Oni straight into the Red Zone?

I'm not certain yet if Ink-Eyes, Servant of Oni will be a breaker constructed card. In order to play really disgusting Magic, the opponent has to be fighting you with a creature deck, which is anything but certain in this world of Myr Incubators, Worthy Causes, and even Dampen Thoughts; if the other guy is not playing a creature deck, doesn't have a juicy graveyard, there are much more efficient ways to muster five power. On the other hand, this creature will be a true terror in limited, the kind of card that guides your entire game plan, even though you know she will not spring until after turn five. You will have incentives to play goofy guys that get in, but also incentives to trade with the opponent, to make sure he has something worth stealing come late game.

Ink-Eyes, Servant of Oni is also a superb threat when changing racing math: a lot of the time, it is right to alpha strike to put your opponent on a particular clock, setting up a chump block or two to make sure he doesn't finish you via counterattack. With the limited presence Ninja creatures, this will become a dangerous enterprise: the little buggers could be hiding anywhere. A certain Rat Ninja can suddenly produce an instant blocker – right from the opponent's own ranks – which will many times be joined by whoever helped her into play in the first place. Did you plan for only one blocker in your alpha plan? Too bad buddy, looks like you need a new plan. In the case that Ink-Eyes starts bouncing creatures like Thornscape Battlemage or Flametongue Kavu… You get the picture I'm sure.