ant to be let in on a secret? There's a little known Magic variant named Highlander that's fun, exciting and challenging. I stumbled across the Highlander variant of Magic back in 2005, learning that players in Europe had embraced the format and put up a fan site (www.highlandermagic.info) explaining the rules. What I enjoy most about Highlander is that the variant reminds me of my play group's early multiplayer decks and you're able to use all cards from Alpha up through the most recent set (minus some banned cards, of course). Although Highlander is not a DCI-sanctioned format, it's a cross between Vintage and Legacy and loads of fun. 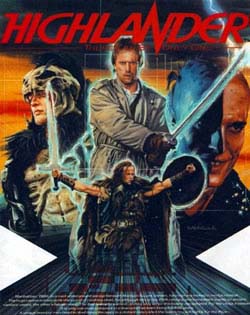 The format's name originates from the Highlander (1986) film in which Christopher Lambert plays Connor MacLeod - a Scottish highlander from the 1530s who learns that he's an Immortal. He can never grow old and can only die by being beheaded. Unfortunately, there's a catch: There are other Immortals like him on Earth and they all must fight to the death to obtain the Prize. The catch phrase of the movie ("There can be only one!") is the direct link as to why the Magic format is named Highlander as deck construction rules state that you can only use one of any card, excluding basic land. Add in a great soundtrack from Queen ("The Princes of the Universe"), and the Highlander film is a must-see '80s flick.

Now that I've whet your appetite for the format, let's break down the rules and then go through two decks. What I enjoy most about Highlander is that the rules are fairly simplistic:

In reviewing the rules for the Highlander format, it's important to point out the reason behind having no sideboard. Because matches take longer due to the unique 100-card minimum (and only 1 of any card) rule, to speed matches up, sideboards were left out. And to be honest, I've been playing Highlander for over two years now and part of the excitement is building a deck that is well-rounded enough to handle any deck. And one more thing before moving on: When you build a Highlander deck, there's a big time investment involved. Once you build the deck and begin playing, a lot of tweaking takes place as you learn what works in the deck and what doesn't. Part of the fun is building a deck today and seeing what it's morphed into in a few years, keeping up on the latest bannings and adding cards from new sets.

The sandbox from which to build a Highlander deck is immense. And that's the challenge. Building a 100 card minimum deck with only one of any card is sometimes overwhelming, but there is a tool that can help. Visit Gatherer (The Official Magic: The Gathering Card Database) and put it to good use. Need to see all the blue instants that ever existed in Magic? You can. Use the Gatherer to search through cards by color, type, and set. Overwhelmed yet? Let's take a step back and learn a few tricks of the trade to help put thousands of cards into a manageable reviewing format.

Pick a color or colors that you want to build a Highlander deck. Think of a theme and focus on why you think that deck would do well in Highlander. Sit down at your computer and write down as many cards as you can think of to build your deck. Save your list (I found that using a web-based email account like Gmail or Yahoo! works best as you can be at school, work, or home and can easily send a quick note to yourself as you'll often have ideas when you least expect it. Might sound corny, but carry a pen and paper with you during this research phase.

Visit Gatherer and run several smart searches. For example, instead of searching for all blue cards (which will give you a list of 1,418 cards), run a search for all blue instants from all sets, but be certain to select the output to be in text spoiler format. Once you run the report, you can copy the Text Spoiler output to your word processor and print out or save some trees and scroll through the list electronically when you have time. For each card type that you are thinking of using, run a separate report from the Gatherer and save the report. After you're finished, you'll have several large lists of instants, sorceries, creatures, enchantments, and artifacts. Take the time to go through the lists and copy out cards you're thinking of using.

After you've weeded through thousands of cards in Gatherer to build your first Highlander deck, don't fret. I've been there: You have an idea of building a deck but just can't wrap your mind around searching through thousands of cards. Take your time, relax, and have fun. Encourage your friends to build decks with you so that your play group can help each other not only for moral support, but in trading. Once you have the list of cards you want to use to build a deck, scour through your collection and gather together all the cards you own, make lists of the cards you need, and trade for them from your friends. For any cards remaining, I'd suggest playtesting those cards in your deck before spending money on the cards. Highlander is a tricky format and what looks good on paper might not necessarily work well in the deck. Remember, a single copy of a card isn't going to come up all that often during matches. Once you have completed your first deck, try it out with some friends and note what its strengthens and weaknesses are. Learn from that and tune your deck as needed.

For Your Consideration: Two Decks

To help you get a grasp on the Highlander format, I'm going to share with you two of my decks. For the first deck that I built, I opted for a solid color construction to make the building process easier. Read through my solid blue permission deck and then we'll discuss.

The simple theme behind the deck is rather straightforward: Counter your opponent's spells, steal his creatures, and use your man lands or flying creatures to win the game. What I've learned over the years is that the deck is slow out of the gate but is extremely powerful in the late game. If I play a Planar Portal and have enough mana to use it each turn, the game is usually mine as I can go for a counter spell each turn to keep my opponent down and win the day with my flying creatures. For any really difficult situations, a Nevinyrral's Disk and Oblivion Stone act as reset buttons.

Yet over the years, I've learned that there are a few powerhouse cards in the deck. An early Rootwater Thief can rip apart your opponent's deck. Not only does it allow you to see what your opponent is playing, but you can pick apart, piece by piece, a Highlander combo deck. When used in conjunction with Tunnel Vision, you'll know what cards are in your opponent's library and instead of using the Tunnel Vision to target yourself, choose your opponent. There's nothing more satisfying than calling a card way down in an opponent's deck. I've shocked many an opponent with the seemingly uninspiring Ravnica rare. If Lady Luck is on your side, Tunnel Vision can put over half an opponent's library into her graveyard. But don't count on the Tunnel Vision as a victory condition, focus instead on using your library manipulation cards (Gifts Ungiven, Fact or Fiction, Brainstorm, Compulsive Research, Frantic Search, and Intuition) to set your hand up for the win conditions you need.

Need a late-game answer? Go through the deck and grab the Draining Whelk or Desertion, they'll surely catch your opponent off guard. What I like most about this blue deck is that with the nature of Highlander, it'll play differently each time. Some games you'll have lots of creatures in the early game and will win that way. Other times you'll use permission in the early game, sneaking in a win with a late-game Gigadrowse, Opposition, or Capsize. Simple, elegant, and efficient, this blue deck is fun to play provided you enjoy permission decks.

Another Highlander deck that I built harkened back to my early days of playing Magic. A friend used to play with white mass destruction and lots of burn. Borrowing from that idea, I put together this red-white beauty:

Again, the theme is simple. Get some shadow creatures into play, wipe your opponent's creatures away with all the burn, and attack away. For the times that you just can't keep control of the board, wipe everything away and start fresh. As with the blue deck, there are a few gems in this deck that are wonderful surprises. Highlander games can take some time to play and here's a true story for you: Back in December 2006, I played my friend in a Highlander duel. She used my blue deck and I played the red-white one. We were tied 1-1. I was down to 5 life and the game was down to the next play. Either I topdecked and pulled out a win condition or I lost. Since 2000, I had always wanted to play Urza's Rage with kicker. Well, my wish finally came true. I drew Urza's Rage, tapped my mana and sent 10 non-counterable, preventable damage her way. And that was that, I won by the skin of my teeth.

Whereas the blue deck is much more difficult to play as you'll need to use your counters wisely, the red-white deck is easy as pie to play. A few tricks in the deck add some spice: Karakas can save your Akromas or frustrate your opponent and put her legendary creatures back in her hand. Similarly, playing an Ensnaring Bridge and then attacking each turn with shadow creatures will frustrate your opponent to tears. But for late game victories, if a kickered Urza's Rage isn't possible, remember to keep bringing back Hammer of Bogardan, Shard Phoenix and Eternal Dragon from your graveyard. They've won me many games.

At first glance, the Highlander format can seem overwhelming. But start small and work your way up. I've seen Highlander tribal elf decks that kick some serious butt, demoralizing an opponent. The beauty about Highlander is that it's a wide-open variant that has the excitement of Vintage with Legacy's balance. Not having to own 4 of certain power rares forces players to think outside the box and put together resilient decks that can outlast others in the field. Building a winning Highlander deck, without a sideboard, is challenging, but I guarantee that it'll be loads of fun. Rent a copy of the Highlander movie, practice up on your Scottish accent, and get ready to yell "There can be only one!" after you win a duel. Or, well, you can just have a blast playing the Highlander variant and shake your opponent's hand after the match. What you do after winning is up to you, but don't miss out. The Highlander format is a blast - much more fun than eating haggis. Trust me.