, this isn't just a hybrid article. It's a hybrid column. It's one part art appreciation, one part investigation of the meanings and origins of card names and flavor text, one part backstory / storyline of the Magic multiverse, and about seventy parts "what's it like to be a planeswalker" (I'm very fond of that part). And since I enjoy varying the format of my writing, it's also one part news article, one part short story, one part slideshow, one part radio call-in show, and about seventy parts multiverse-spanning stream-of-consciousness Vorthosian vision-quest scribblings unearthed from the murky headspace between Magic player and the ideal of the planeswalker. So, to me at least, it's no surprise that today we talk about the concept of "hybrid" in a very hybridized way.

The Flavor of Color Alignment (Hint: It's Pie-Flavored)

In this column I talk a lot about "color alignment." Boggarts in Shadowmoor are red-green-aligned. Benalia is a white-aligned nation. But what does that mean? Here's a circular definition: a creature is aligned with a color if it's summoned using mana of that color. That sounds kind of meaningful, but really that's like saying "a creature is green-aligned because it's green." What we really mean by a creature's color alignment, in flavor terms, is that it embodies the values of that color. Most creatures are aligned with only one color; Raging Goblin, for example, is red-aligned because it embodies red values.

It's impulsive, it's short-sighted, and it's a goblin. Is it summonable with red mana because it's red-aligned, or is it red-aligned because it's got red mana in its cost? This kind of question is quite hard to answer, and it's because of the powerful flavor behind the Magic color wheel. The five colors of mana have mechanical import, to be sure, but the main division between them is flavor. There's no answer to the question "Which came first, red or red's values?"—they've been one and the same since Magic began. Creatures that embody red's slice of the color pie are red; and red creatures embody red's slice of the color pie.

Now let's look at a more complicated case. Vexing Shusher, as a Shadowmoor boggart, is both red- and green-aligned. The boggarts of Shadowmoor are brutish, instinctual creatures, concerned only with their next meal. They embody the values of both red and green. More specifically, they embody those values that red and green share. As such, many of them are summonable with either color of mana.

Now, there are individual differences among the race. Some boggarts in Shadowmoor skew a little more toward green, and others a little more towards red—just like there were both black boggarts and red boggarts in Lorwyn. The race as a whole has both colors among it, in both incarnations of the plane, and those individuals who lean so red that they're not green anymore, or so green that they aren't really red, aren't hybrid, even though the race as a whole is aligned with both colors. Hybrid is a special type of a two-color-aligned race. Hybrid red-green boggarts represent individuals who have elements of both colors. You'd expect Vexing Shusher to exhibit traditional red characteristics and traditional green characteristics—in particular, characteristics that would be at home in either. It's such a fitting example of the value overlap between the colors that it's summonable with either, or with a combination of the two.

The Flavor of Gold vs. Hybrid

Doug: Here we have three two-mana creatures and some of the ways that you could come up with two mana. Some of those ways of paying two mana succeed in casting you, my friend, and some of them succeed in casting the Shusher—and others don't. For reference I included an artifact creature, too—Painter's Servant, a Scarecrow from Shadowmoor.
Scab-Clan Mauler: Eyes... glazing over...
Doug: Note how there's a continuum of mana specificity from gold at the most specific to artifact at the least specific, with hybrid in the middle. 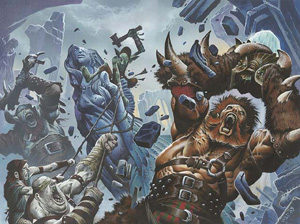 Except for one, I can tie back all of the art on the Shadowmoor rare lands to lands in the Lorwyn block (which was a very cool idea). Does Mystic Gate tie back to a specific land from Lorwyn?
–Josh W.

Sharp eye you've got there, Josh. There are indeed intentional flavor correspondences between five of the "tribe lands" in Lorwyn and Morningtide and the "hybrid duals" in Shadowmoor. Each one represents a location that has gone through a kind of before/after process as sunlit Lorwyn became gloomy Shadowmoor. Let's take a look at the lands you're talking about:

Lorwyn's red-white-aligned giant land, the amphitheater where Galanda Feudkiller would hear and evaluate the problems of other races, has become a smoking ruin in Shadowmoor, more aligned with the cinders than giants. Artist Rob Alexander made the transformation complete.

Elves were once green-black-aligned, and now they're green-white. As Christopher Moeller illustrates, their handsome palisade has become worn and run-down as their role has changed from beautiful tyrants to humble beauty-seekers.

Boggarts were black-red in Lorwyn, and now they're red-green. Ralph Horsley reillustrated Wayne Reynolds's tree-fort-like hovel as a gloomier location—ironically with less green growth to match the Shadowmoor look and feel, despite the land now producing green instead of black!

You might think that Wanderwine Hub would become the blue-black land in Shadowmoor, and there are definitely compositional similarities thanks to artist Warren Mahy. But the bell tower in the art reveals a deeper truth: merrows in Shadowmoor inhabit places that have flooded, like some old Rustic Clachans. Warren Mahy reimagined his Wanderwine Hub with Fred Fields's Rustic Clachan in mind.

Which brings us to Mystic Gate. Mystic Gate represents the Shadowmoor evolution of Morningtide's Rustic Clachan—although a different clachan than the one that flooded—note the lack of a bell tower. Both cards are the efforts of artist Fred Fields. You can see how the diagonals and perspective are similar in each piece of art. In Shadowmoor, though, kithkin are more about walled fortresses rather than welcoming, open villages, so they have a gate to trap intruders either in or out. If it weren't for their increased xenophobia after the Aurora, you would probably see similar buildings inside the village, like on Rustic Clachan.

Thanks for your question! I'm heading out on vacation for a bit, so I'll see you again in two weeks. Hopefully nothing terrible will befall the column while I'm gone.