has come to my attention that Taste The Magic has been functioning with a small communication handicap. It’s not a huge deal, but it’s one that lead to some confusion regarding last week’s TTM article.

(Brief aside: my 10th Grade Geometry teacher, Mr. Harris, taught us never to assume, because it makes an “ass” out of “u” and “me.” Yes, a cheesy pun, but nonetheless a solid piece of advice.) So anyway, since I began Taste The Magic I have been assuming that you, the reader, knew that I was a Magic artist long before I worked at Wizards and before I started writing this column. I do not bring this up now to toot my horn, but to make sure there is no communication breakdown. Apparently, when I dished out an “I” or a “we” in last week’s article, a good number of folks did not know what I meant - they did not know that I was lumping myself in with all the other Magic paint-slingers. You can click the “Peek at Some Pictures” link to the right to search Gatherer for my creations. (This, on the other hand, is just me tooting my horn. I cannot help but be proud of the work I have done.) So from now on, if you hear me “we”ing or “I”ing when talking about Magic art, you’ll know that it’s not a typo or a goof.

Speaking of goofs. Last week’s article, “Don’t Chew With Your Mouth Full” has a title that was a complete blunder. Those of you who assumed (remember what Mr. Harris said) that I was cleverly combining the old rules, “Don’t talk with your mouth full” and “Don’t chew with your mouth open,” thanks for the benefit of the doubt. But no. It was just a goof. Apparently my brain amalgamated the two rules into one really dumb rule. If I cannot chew when there is stuff in my mouth, when am I supposed to do it?

So in paragraph one I pump myself up, and in number two I pull the plug. I guess we’re back where we started. On to paragraph three.

After 2000 years of bone-chilling winter, Terisiare (that’s the island continent on which Ice Age and Alliances took place) was just starting to remember what she looked like under that thick cloak of snow. But then, just as she was trying on a little green Spring dress with a floral pattern, the temperature drops and it’s cloak and mittens time again. But how? The Ice Age was ended when Freyalise cast her mighty World Spell.

Somebody had some icy magic of his own, that’s how. 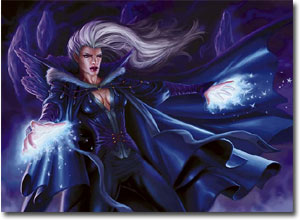 Let’s say, hypothetically, that a year goes by here on Earth and it stays Winter the whole time. Scientists fight to figure out what’s going on. Al Gore goes into hiding because his Global Warming theory seems embarrassing now. The world does what it can to get things back to normal. But, let’s say Winter lasts 10 years, or maybe 20. Sure, the scientists are studying this change, but something tells me that the people are adjusting their lives around this new cold world. Nobody is buying shorts at the yearly Spring Sale at Penny’s. Instead, the snow becomes the way of things and people start to base their cultures and lives upon it. (Snowboarding becomes the great American pastime, and I stop using Baseball analogies here in Taste The Magic.)

This was the reality, way back when on Terisiare. After generations came and went all under the blanket of Winter, life adjusted to it. That’s not to say everybody liked it. But some people did. The “some people” I am talking about is a small sect of wizards and scholars not unlike the scientists of today, studying the changing world and figuring out ways to deal with its new form. While Terisiare was covered in snow, this group, called Rimewind, was tucked away in their keep way up in the wilds near Ronom Glacier. They were content to go about studying and developing magic that worked with the cold. At that point, hundreds of years into the Ice Age, fighting against it seemed futile. For the Rimewind, this was a good move. Sometime soon after their formation, they discovered a way to use the ice’s crystalline structure as a sort of lens. They drew mana from the land and pulled it up through the ice… and it was magnified!

The wizards of Rimewind slid easily through the remaining thousand years of the Ice Age. Their magical discoveries led to comfortable and rewarding life. Until Freyalise came along and turned everything to soggy mud. The people of Rimewind had to once again adapt to a changing world. But some of them were not yet ready to give up the power granted them by the cold. 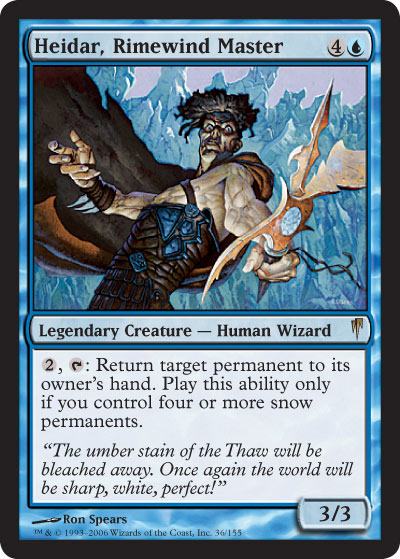 Looks kind of crazy, eh? Well, let’s just say that Ron Spears did not miss the mark when he painted this guy. Heidar was the catalyst for Rimewind’s fight against the Thaw. I do not want to give away much more about how the story progresses, but based on the fact that we have a whole set called “Coldsnap,” it’s a safe bet that the Rimewind folks do a pretty good job in refrigerating Terisiare. 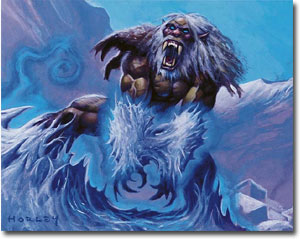 Heidar is a prime example of Creative and Design/Development playing well together. This card is a perfect example of the Rimewind’s technique of expanding their power through the use of ice. When you have four or more snow permanents, Heidar becomes a force to be reckoned with. Fear not, cryophiles, there’s more than just snow-covered land around Rimewind Keep. The unnatural Winter brought about by Heidar and his minions has caused creatures, artifacts, and even enchantments to take on a new snowy form.

The question right now is, will you join Heidar in his quest to re-cover the world in snow? Will you use snow cards to power up your Rimewind forces? Will you utilize the spells that make snow where there was none? Will you fall in line with Heidar’s chilling, fervent words?

“The umber stain of the Thaw will be bleached away. Once again the world will be sharp, white, perfect!”