I Have Found It!

! I have found it! With “it,” of course, being my preview card. Just don't look into its deadlights: 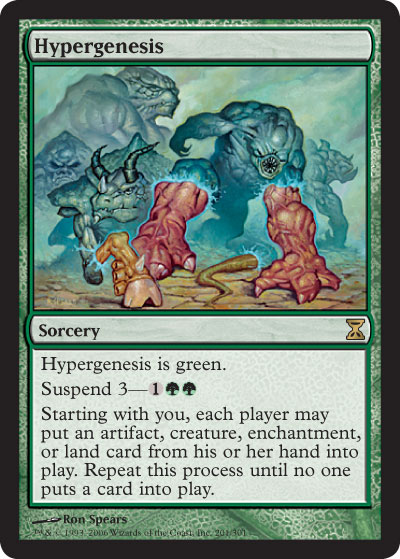 Finally, a Green card! For a minute there, I was worried that Time Spiral would be completely bereft (bereft!) of Green cards, just like Champions of Kamigawa. Hypergenesis is just what the doctor (or would it be shaman?) ordered and nips that completely made-up theory in the bud. Trust me, Green Mages, when I say that Time Spiral is full of awesome Green cards, many of which are quite tricksy. Clever Green cards? They really must be messing with the colour pie. Scott Johns' favourite card from the set, [Name withheld by request.], is so dang adorable that you'll want to take it home from the store and feed it and love it and call it your own. You'll have to wait to see it, of course, but I bet you'll be impressed. It's neat-o-keen, and I don't use that word lightly.

Hypergenesis, which has the same card text as Legends favourite, Eureka, is one of the cycle of Suspend cards with no mana cost, joining Wheel of Fate (check out Anthony's preview from last week), Lotus Bloom, and Ancestral Vision (check out Ben Bleiweiss' preview over at Starcitygames.com) as old school powerhouses that have been souped-up with a brand new suspension.

I like how the Suspend cards create a little sub-game. You tell your opponent that in a few turns you'll be doing something dramatic. What do they do?

From what I've read, here's how you play your Suspend cards: First, perform a “special action” and put your spell in Suspension. Next, twiddle your thumbs for three or four turns, depending on the card you've Suspended, and let your opponent sculpt the perfect permission-heavy hand. Then, when you've removed the final time counter, play the spell and sit there helplessly while your opponent Remands it. Repeat steps 1-3.

Obviously, that analysis is pretty shortsighted. Not only will you play games against decks without twenty counterspells (or even four Remands), but you are actually allowed to play spells, activate abilities, and interact with your opponent while your spell is Suspended! I know that sounds strange, but it's true. If your opponent is going to let you get through three turns completely unhindered, while they spend a lot of energy stockpiling Remands, then more power to him. In the mean time, you can be doing any number of things to cause them problems. Like, say, destroying their lands, or picking apart their hand with Duress or Cabal Therapy or Nightmare Void. What if you play something like City of Solitude or Dosan the Falling Leaf to effectively shut off all of your opponent's counterspells? Surely they will have to counter it. You can even defend your Suspended spell with counter-magic of your own! An even crazier notion is that your opponent will let you resolve your Suspend spell without a fight, especially if its effect is symmetrical like that of Wheel of Fate and Hypergenesis.

. This works out very well for the Green-loving magician, since you can use any number of one-mana Elves and/or Birds to ensure that you can Suspend Hypergenesis as early as the second turn. In Standard alone, you have Llanowar Elves, Birds of Paradise, Elves of Deep Shadow, and Boreal Druid. 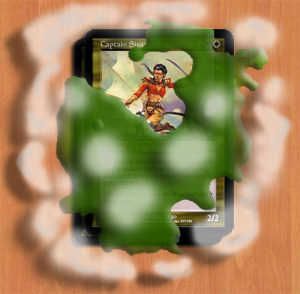 By suspending it on turn 2, that means that on turns 3 and 4 you'll remove a time counter and on turn 5, you'll remove the last counter and play Hypergenesis without paying its mana cost. This gives you (and your opponent) a few turns to fill your hand up with Green Meanies, Blue Meanies, or even Green and Blue Meanies like Simic Sky Swallower (Meanies of other colours are also acceptable). There are many ways to do this, of course. Luckily, Green is kinda the king of Creature tutors, so feel free to take advantage of that fact. Fierce Empath is one of my favourite cards of all time and is guaranteed to put something large and/or uncastable into your hand. Captain Sisay is another card that will search out fatties. The trick is getting her to survive long enough to untap. (A brief side note: My own Captain Sisay has been saddled with so many Contagion counters that I had to put my deck in quarantine.) Time of Need is a sort of one-shot version of Captain Sisay for half the price and with half the versatility. If you don't like those options, you might try Congregation at Dawn, Worldly Tutor, or even an oddball like Pack Hunt. Perhaps the most interesting creature tutor for a Hypergenesis deck is Weird Harvest. Yes, it's symmetrical. Yes, you'll be giving your opponent creatures that they can put directly into play with Hypergenesis. The upside, of course, is that your deck will be designed to really abuse the effect, so your creatures, artifacts, enchantments, and lands should outclass theirs. There is also the possibility that you will win on the spot, using various combinations of cards (more on that in a second).

The other colours can also supply some excellent tutoring. Supply // Demand (mostly Demand) and Gifts Ungiven give you a lot of flexibility if you want to build the deck around sneaking non-creature permanents into play. If you want to drop several Auras on to the table, then Three Dreams is the card you're looking for. Any number of Black tutors could be good, including Diabolic Tutor, Insidious Dreams, and, perhaps the best of the lot, Infernal Tutor. Even without a tutor effect, you can still fill your hand with some bulk card drawing, like Fact or Fiction or Compulsive Research.

When you get the opportunity to put every permanent in your hand directly into play for free, you don't want to waste it by dropping a bunch of, say, Thallids on to the table. You might as well go big or go home. I recommend going big. Decks have been cheating creatures into play for centuries, with cards like Sneak Attack, Elvish Piper, and even Zombify. These decks used many of the same heavy hitters, your Darksteel Colossi, your Serra Avatars, your Verdant Forces and Crater Hellions and Angels of Despair. Those are incredibly fun cards, to be sure, but perhaps there is something better.

Speaking of “better,” there are a number of two-card (or three- or four-card) combos that win the game instantly. First of all, you can assemble the four Fifth Dawn stations (Blasting, Grinding, Salvaging, and Summoning Station). Throw in a Chromatic Sphere and that's an instant win. I'm not sure exactly how, but I think you tap and untap things until your opponent concedes. Another nifty one is the ol' Kiki-Jiki, Mirror Breaker and Sky Hussar combo, where you use Kiki-Jiki to copy the Hussar, which untaps Kiki-Jiki, allowing you to copy the Hussar. I could do this all day, that is, make infinite creatures. If you don't have the Hussar, you can still make a lot of creatures with Kiki-Jiki and Intruder Alarm and any other non-Legendary creature. Bosh, Iron Golem and Draco is almost an instant win, since Bosh can fling the sixteen-mana Dragon in your opponent's general direction for, not coincidentally, sixteen damage. Bringer of the White Dawn and Mindslaver combine to steal all of your opponent's future turns, which might make it tough for your opponent to win. Sekki, Seasons' Guide forms an infinite-damage combo with Pandemonium. All you have to do is target Sekki him/herself with Pandemonium's triggered ability. This will deal eight damage to the Legendary Spirit and put eight Spirit tokens into play. These tokens will then deal eight more damage, this time to your opponent. Then, you can sacrifice the tokens to reanimate Sekki, which restarts the loop.

Which of these combos should we use? Why not all of them? (And why don't we also assemble Kaldra, just for kicks.)

That deck is really dependent upon resolving your Hypergenesis, since so many of the spells are otherwise unplayable. And if your opponent has a Remand, well, you'd might as well pack up your cards and go home. Like I said before, though, you're perfectly welcome to add some measure of disruption to the deck. You don't have to sit idly by while your opponent figures out a way to stop you.

If you added Black to the deck, you could add a million different disruption cards. How about Mesmeric Fiend, Cabal Therapy, Nightmare Void, and even Dosan the Falling Leaf? You could still play with your mana Elves to ensure a turn 3 Hypergenesis. You could add some of those tutors I talked about, like Fierce Empath, Time of Need, and Weird Harvest. You could still have a couple of “instant wins, ” either four Kokusho, the Evening Star or four Laquatus's Champions (or some combination thereof).

1 Boseiju, Who Shelters All 4 Hypergenesis
60 Cards

Obviously, there are many other options for a deck like this. Nightmare Void could be Muse Vessel or Disrupting Scepter or any number of creatures, such as Nezumi Shortfang or Cabal Interrogator. You could add some reanimation to the deck as a back-up, in case your Hypergenesis gets countered. You could play other creatures, or other ways to find them, like Living Wish.

Until next time, make a discovery in the bathtub!