, Rabiah, Phyrexia, Ulgrotha, Mercadia, Rath. The multiverse is vast, but Magic sets haven't explored a lot of different worlds. The latest expansion is the first step in changing that. Mirrodin is the start of what we hope to be a new, exciting era for creative elements in Magic, in which we get away from the traditional locations and explore the true potential the multiverse has to offer. Wizards of the Coast has some great ideas for other planes, and we hope that they'll lend an interesting, unique flavor to sets to come. But it all starts here, on Mirrodin.

Oh yeah, and artifacts are back in force too.

But the other guys are here to discuss all those boring mechanic-related things. My job is to tell you about the world you'll be seeing in this block. There are plenty of familiar elements, so it won't be too much of a culture shock. But there's a lot of new stuff lurking about too, as well as a few things that won't be fully explained for another set or so. You'll have to go to the novels to find out most of Glissa's story, but even if you aren't interested, the setting is rich enough and unique enough to have a lot of appeal all on its own. 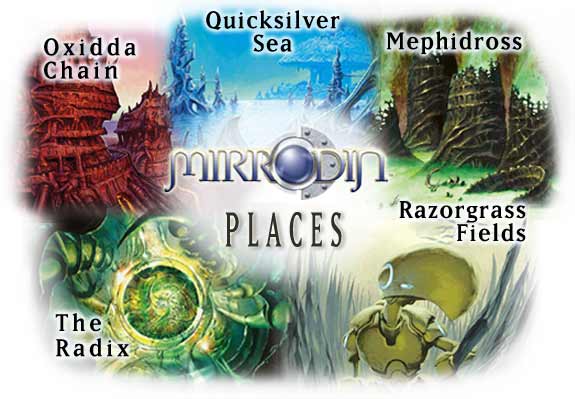 This expansion, and the world it takes place in, has one watchword: metal. On Mirrodin, the organic and the metallic have evolved together, creating life that is a strange mix of biological and artificial. From sharp razorgrass that grows fast enough to impale unfortunate humans, to oceans that flow with an unusual form of quicksilver, even the most delicate lotus flower is made of metal. The intelligent beings who walk Mirrodin are no less strange, an odd mish-mash of muscle and steel. Most don't think this is strange in the slightest. But it's those who do that are the focus of the action.

Artifact creatures also walk the planet. Some seem to have come about naturally, while some intelligent, probably long-dead, force has undoubtedly invented others. Four suns (some beings call them moons) orbit the planet. Each one (red, black, white, and blue) seems to hold some kind of power over the land below. They are worshipped and feared by Mirrodin's inhabitants, and only time will tell what secrets they have seen on the planet they lend their light to.

But let's take a closer look at some of the specific places and people that will be developed in the year to come. As I said before, most are relatively familiar, and there are humans sprinkled all across the world, each with evolutions befitting their homeland. There's the Oxidda Chain of mountains, where the Great Furnace belches out steam and molten metal constantly. The goblins there worship it as the creator of Mirrodin, and constantly feed the Furnace both flesh and metal in order to keep it going. Even here, there are secrets within secrets; something caused the goblin elders to ostracize the rebellious Krark Clan, but no one except them knows what. Perhaps it has something to do with the ultimate origins of Mirrodin, and the hands that could be shaping it.

The Tangle is a dense jungle of twisted copper trees stretching for miles. Elves live here, and they worship the nature they know, as unnatural as it might seem to us. However, the Tangle hides things even more dangerous than the vicious beasts that hunt within its massive confines. The Radix is a clearing where things simply vanish, the Edges of Forgetting erases elves' far-reaching memories, and the Tree of Tel-Jilad houses infinitely wise trolls who know a lot more than they're telling. For all its savagery, the Tangle is strangely silent, which is why our heroine, whom I'll introduce later, strikes out to find a greater truth.

The Mephidross is a toxic wasteland of ooze, filth, and corrosion. There, a dread vapor known as necrogen slowly turns the unfortunate into the Nim, a race of zombies well suited in hunting down the living. The humans crazy enough or hardy enough to live here eke out an existence scavenging among the Mephidross' many scrapheaps. 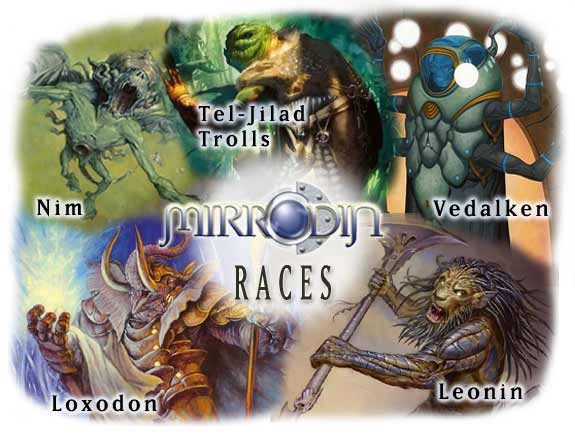 Then there's Lumengrid, the grand city you saw in the Mirrodin preview graphic. Set above the Quicksilver Sea, the city is home to both the human Neurok and the Vedalken, a new blue race that I first helped write up years ago for an exploratory Magic project. These beings spend their lives in the ceaseless pursuit of knowledge, towards a grand goal that has eluded the species for millennia. They are so desperate for those answers that they may have made deals with hidden powers to get what they want…

The Razor Fields, overgrown with incredibly sharp bladed grass, house nomadic humans and elephant warriors, but are dominated by the Leonin—a race of cat warriors built for survival. Their military and political leader, Raksha Golden Cub, is eager to bring his people glory in battle, while Ushanti, one of their great spiritual guides, foresees turmoil ahead. The Leonin have suffered the most at the claws of the artifact creatures that rampage across the land, and Rashka has a plan that could stop all that, or doom his people to extinction.

As you can see, there's a lot going on in Mirrodin, and plenty of secrets to uncover either through the cards or the novels. Few worlds in Magic thus far have keyed into one idea as strongly as Mirrodin. The entire world comes out of that one unifying principle of metal, and it'll be interesting to see how the world, and its inhabitants, develops in the year to come.

Now we come to the part most of you have been waiting for: the card previews. Appropriately enough, I'm going to introduce two of the major characters you'll be seeing a lot of in this block. Glissa Sunseeker is a Tangle elf with an innate curiosity and a strange discomfort with the way the world is. She will travel all across Mirrodin to satisfy her curiosity, and answer her nagging thought that this metal planet is wrong somehow. These are the qualities that inspired the card that bears her name. It's a unique combination of two of green's strengths: mana production and artifact destruction, allowing her to take down any artifact as long as you have the mana in your pool to do so. Since most dangerous artifacts are relatively cheap, the mana requirement is usually quite a bargain. Best of all, unlike cards like Gorilla Shaman and Elvish Scrapper, you can then proceed to use that mana to play whatever gruesome spell you wish!

Then there's Bosh, the ancient golem of mysterious origin that's the Larva to Glissa's Miyu (a hundred points to anyone who understands the reference!). Just like Glissa, he's seeking the truth, but his truth is his own lost memory, and an understanding of his place in a world he no longer recognizes. Appropriately enough, his card is big, bad, and destructive. He's also a prime example of a new innovation in artifacts: the colored activation cost. Without red mana, he's still a beefy artifact creature. Add some Mountains to the mix, and he's suddenly a metal “Bloodshot Cyclops,” able to toss around Levelers and Myr at will. Thanks to the lack of a “tap” symbol, any artifact you have can be turned into screaming death in a moment. Combine him with searchers like Planar Portal, and the damage never needs to stop! 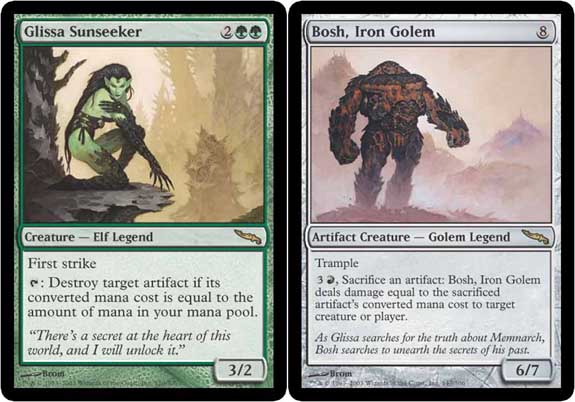 These two disparate individuals, and a goblin mechanic kicked out of the Oxidda Chain due to his unusual intellect, make up the core of our adventuring force. Together, they'll search out the secrets of Mirrodin, and find a lot more than the answers they're seeking. The cards will tell you a little about where they go; author Will McDermott will fill in the rest. One thing is sure, though: before they're done, they'll turn the entire established order of Mirrodin on its ear, and the results may not be pleasant.

The questions the inhabitants of Mirrodin face are the questions most humans face: where did we come from, and what is our purpose? Unlike humans, though, you'll be finding out the answers for the next year. So whether you're a storyline buff, or just enjoy the view from the cards, there's plenty to see on Mirrodin, a set that'll truly test your metal.