’ve received a lot of emails from readers asking me what to do in order to become a better player. I'm going to try and answer that difficult question, based on my own experience.
At first, have a look at this article I wrote a month ago which describes several ways to make you win more games without necessarily improving your skills.

Now, let's go to the crucial point, what should you do to become a good player? There is nothing such as a straight method to make casual players become pros. But sometimes, triggers get you to the upper level. Based on my experience, here are my tips to help you reaching the top.

You will have much better chances to become a good Magic player if you start while you're a teenager – The same applies to any intellectual sports. When you're young, your potential has no limit. But when you become an adult, you have to face a wall at some point. You can still get better from there, but it’s going to be much harder.

The importance of a good environment

It's much easier to climb if you're in good company. For instance my brother has always been for me both a testmate and a rival. We have always wanted to do better than the other and it pushed us above. Playing together most of the time, we developed similar skills and after 11 years of playing Magic we've always had nearly the same level. Finding friends and rivals, playing with people as good as you or better helps you pushing back your limits.

Learn from your mistakes

Most of players don't. Why? Simply because they don't realize they’ve actually misplayed. Even a Pro nearly never plays a game perfectly. The key is your ability to see your mistakes and be able to make them never happen again.
Friends can help, as someone who plays with you and see you playing regularly can tell you when you make a mistake. Once you’re able to see most of them, the key will be concentration. If you manage not to reproduce your mistakes, you will improve fast.

Learn from other players

The fact that you're better than another player doesn't mean you have nothing to learn from him. This is mostly true about deckbuilding. When you tested your deck a lot, you don't necessarily feel like talking about it to other players for you don't feel like they would help. But if you compare your decklist with someone running the same archetype as you are, you will often realize a little something you hadn't thought about. The same applies to limited. Drafting on Magic: Online with someone seated behind you is a good practice. You can't know exactly how good every single card is, and everybody tend to overestimate cards and to underestimate others. Another eye and another experience is always helpful.

The only way to know your limits is to play again and again to push them as far as you can. Play a lot, be serious, meaning you play only serious decks, and participate tournaments as often as you can.
Farid Meraghni is a good example. Farid just turned 15 when he started playing Magic. He then attended drafts in Paris every week, spent a lot of time on Magic: Online, and qualified for his first PT in San Diego the same year. French players were not even surprised when he won the PT as he was by far the best French limited player then. p&gt; 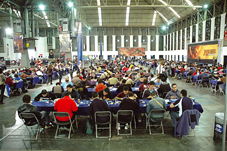 The key part of playtesting is to participate in sanctioned tournaments, for you will be able to evaluate your progression at a local level, and also to meet many other players, which is the best way to gather a good testing group. Once you do pretty well at local event, try PTQs, then if you also do good in PTQs try a Grand Prix... Look above and get yourself new goals once you reached one.
My first goal was simply to be better than my brother. Then for years I went from being one of the best local players, to one of the top French, before becoming one of the best players in the world. Ironically, I still don't know if I've reached my goal to become the best player in my own family.

It is not really difficult to play Zoo or Gruul right, but playing those decks won't require too much from your skills. Stimulate them, force yourself to play decks you consider too difficult for you. If you want to become a good player, there shall not be a deck to difficult for you to play.
After playing aggro for years, I decided to change for a UW lock based on Winter Orb and Propaganda. The deck was not great, but it revealed me another aspect from the game. The control player only reacts, he adapts to a situation, he anticipates.
You should give a try to control and combo decks, not only will it make you a better player, but also will it help you to play better against those decks.

If you want to be good in limited, you nearly have to. No need to try and gather eight men once a week, you can just playtest anytime. Magic: Online made the global level in Limited a lot better over the past years, as you can get used to a format drafting with good players. An 8-4 draft is much more difficult than a PTQ Top 8 as you mostly meet pros and good local players.

No music today, as I'm staying at my brother's, and typing this article early in the morning, sitting in the living room where a friend is sleeping at the moment. I need to buy headsets.

Olivier's Corner will soon fade away - instead, a new column 'Ask the Pro' will be created on the Tournament Center. You'll have the opportunity to ask me any question you have through this column and you'll find there my answers on a regular basis

You can already send your questions at olivierscorner@hotmail.fr