, it's Evil Twin Week on whatever site this is. Not that I care. I'm not that well-versed in your game of swords and sorcery. I don't even have a suitable costume. To be honest, I prefer more skill-intensive, less luck-based games, like pin the tail on the donkey. Then why am I here? As I sit in my home office [prison cell –CM], I'm wondering the same thing. To make a long story short, I'm doing this because my English professor [the parole board –CM] said that volunteering to write this article would be a good way to earn some extra credit [become eligible for early parole –CM]. Trust me, it wasn't my idea.

If there's one thing I hate, it's themes. [At least it's not Shiv Week. –CM] I especially hate themes when they're as forced as this one. I mean, come on! Evil Twin Week? Are you seriously trying to tell me that every single one of these cape-wearing, wizard wannabes has a twin, and, on top of that, it's an evil one? Maybe it's possible. Maybe if someone had some kind of cloning machine. Even then, I'm highly dubious. 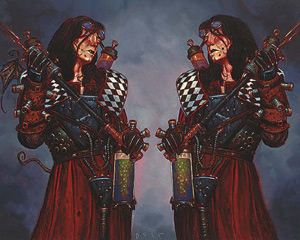 What makes this even worse is that the insistence on binaries necessitates that I be the "evil" one. Don't let these clowns fool you. Chris isn't the "good" twin. That's because we're not twins at all. In fact, there are nine of us that share the same DNA. That's right, we're nonuplets. As you can imagine, with nine children there could be no straightforward dichotomies, no good twin and no evil twin. There could be no black and white, only shades of grey (and plenty of baseball). Nine tick marks along the good-and-evil continuum. According to Chris, he's the "chaotic-neutral" nonuplet. I'd say he's more "chaotic-boring." By contrast, on this same imaginary scale of his, I'm "neutral-evil." Sorry to ruin your cute little theme, but that's as close as it's gonna get.

I'm not really evil, per se. Chris says I'm more of a pompous [frakkin' zounds –CM] than an evil-doer, and that's one of the few things that we can actually agree on. (Wait, what happened there? Are you telling me that I'm not even allowed to say [frakkin' zounds –CM]? Where are we, church?) I haven't committed any crimes. Well, any serious ones, at least. As a juvenile, I was apprehended and charged with three counts of grand hamburglary, but the judge let me off with a slap on the wrist. Since then, I haven't rob a bank or pushed a little old lady down a flight of stairs [recently –CM]. I have certainly never fashioned a doomsday device of any kind. Heck, I didn't even come up with the Eighth Edition card face. I don't actually know what that means, but Chris told me to say it. While I haven't committed any serious crimes [Hamburglary is not serious? –CM], I have taken some hilarious pictures of Chris's toothbrush. That's got to count for something.

Enough about me. Let's just get this over with. I only have a few hours before my San Antonio Spurs and Los Angeles Lakers square off in the NBA Western Conference Finals. Basketball doesn't get more "neutral-evil" than that. Poor Chris prefers the hapless Phoenix Suns. He says they're "Johnnier," whatever that's supposed to mean. I guess it means they lose all the time to better teams.

So, how about that Magic, huh? Sorry to disappoint you all, but the truth is I don't play Magic and, in fact, I know very little about it. From what I've read of Chris's articles, being knowledgeable about the game is not a requirement for columnists. For some reason, even though I've never picked up a card, whatever it is that Mark Rosewater does makes me very angry! 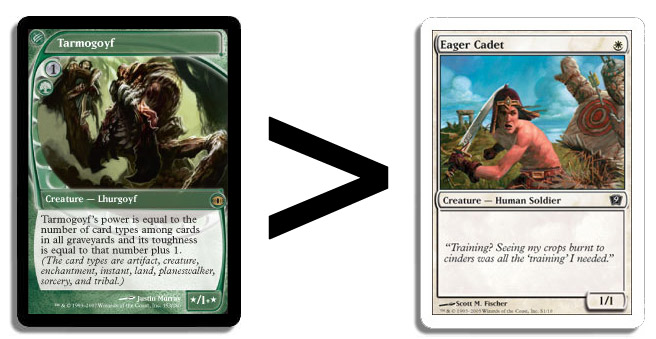 He tried to explain the game to me once. It seemed fairly complicated, but I quickly learned that whoever can say the dumbest made-up word will almost certainly win the game. You don't have to look beyond the fact that Tarmogoyf and Boggart Ram-Gang trump Eager Cadet and Fresh Volunteers. The training session didn't last long, though. As soon as he got to the part about the library, I said, "Uh-uh. This game is not for me." If there's one thing I can't stand, it's libraries. They're where bored housewives go to live vicariously through bored housewives who are visited by handsome repairmen and where moronic college students go to plagiarize smart people. Besides, if I wanted to read a book for free, I'd steal it.

How hard can writing this column be? I own a dictionary (stolen). All the words are right there. As far as I can tell, to be successful at this, all you have to do is grab a random pile of cards, tell some bad jokes, and then a bunch of pun-lovers will shower you with praise. I'm tempted to follow this trajectory myself, but if there's one thing I can't stand, it's puns. Someone with half a brain once said that puns are the lowest form of wit. Chris tells me that it's actually sarcasm that is lowest form of wit, but, whatever. It should be puns. Personally, I'd go even further and suggest that "puns" and "wit" do not even belong in the same sentence. Puns are the domain of frivolous, low-brow humourists like Tex Avery, the Three Stooges, and Vladimir Nabokov. The biggest problem with puns, as I see it, is that there is no victim. How can I possibly feel smugly superior to someone with this kind of tiresome word-play? Of course, some would say that the English language is the real victim. Others might suggest that we all suffer whenever a pun is uttered. I've even heard it said that God kills a kitten every time one word is recontextualized because it sounds like another word. Now, that might be going too far, even for me, but you have got to applaud God for his initiative.

Now, sarcasm, on the other hand... Sarcasm is for the truly sophisticated. Normally, people try to say what they mean. With sarcasm, what you do is you say the opposite of that. I know it sounds complicated. That's because it is! Medical science backs me up on this. According to the internet, to understand this complex form of humour you require a highly functioning right ventromedial prefrontal cortex. As an obnoxious [frakkin' zounds –CM], I pride myself on the fact that my ventromedial prefrontal cortex is uncommonly nimble. Watch it in action:

Well, that was a sufficiently non-rambling and non-pointless opening segment. I'm sure Chris is busily devising a pun to express his jealousy.

Confused by that subheading? Chris told me to put that there. He said it was an allusion and that it was appropriate. Well, if there's one thing I can't stand, it's allusions. It looks more like a typo to me. I am told that it is what's called a "one-percenter." One percent funny, that is. For you readers, that's probably more than you've come to expect.

Judging from the few articles that I hastily skimmed, we've now arrived at the part where Chris picks a card a random and proceeds to explain how amazingly it works with every other card in the history of Magic. I have been instructed to talk about Rage Reflection and the rest of that cycle. Chris said that their doubling effects would fit nicely into the Evil Twin theme. Thanks, smart guy! I would never have figured that out on my own. (See, sarcasm!)

I could go on, but this is already getting tedious. I bet a monkey couldn't do this. (Sarcasm again!) I guess I'd better get around to building some decks to please the diehards. How hard can it be? I have access to Gatherer (stolen). All the cards are right there. The final decks can be found below. To build the one with Boon Reflection and Wound Reflection, I made a great intellectual leap and searched for cards with the words "gain life" or "lose life" printed on them. Shockingly, some cards, like Death Grasp, do both! Better put them in the deck, then! The other three decks were built on the backbone of other such "Eureka!" moments. Lots of mana and lots of double strike? Add creatures that you can pump! Got card-draw out the yin-yang and mana out the wazoo? Diviner's Wand! Too much mana and not enough life-gain? Dawnglow Infusion!

I modeled the decks after the ones in Chris's columns. That's why they're so inefficient and watered-down with singletons. It's like sending your army into battle with one guy who is really good at juggling. Because you just never know when that particular skill will come in handy. It's amusing, perhaps, but only if you aren't the juggler. Ultimately, it seems like Chris does things on a whim, and if there's one thing I can't stand, it's whimsy. Give me some data. Crunch some numbers. Count some [frakkin' –CM] beans! If you can't justify yourself with a spreadsheet, you shouldn't be playing a game. 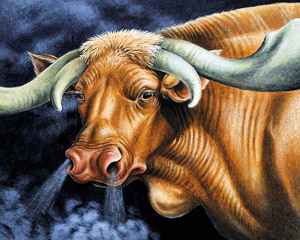 Don't get me wrong. Despite being evil-ish, I'm not that strongly opposed to silliness (especially if it ends in a serious injury). Chris just takes it too far. Silly jokes, silly decks... He even makes up his own silly cards and gives them silly names like Lugubrious Pony and Ox Girlfriend! I've actually seen him writing these things down! He keeps a little notepad at his bedside. I guess he does it in case he has an incredibly amazing dream about inventing a new kind of sentient fungus monster or something. How pathetic is that? Doesn't the head wizard guy make enough Dragons, Elves, and, uh, cloudgoats to keep him entertained? At the very least, he could give his embarrassing creations serious names, like Steed of Ill Temperament and Bovine Betrayer. Frankly, his behaviour makes me cringe. Keep it to yourself. If I wanted to see people having fun with their hobbies, I'd watch Hostel.