weeks in between theme weeks are blank canvasses for the writers here at magicthegathering.com. While that may seem like a big party, it's actually quite tough at times to come up with a topic worthy of a whole weeks worth of words. I was at a loss for a topic this week, until I remembered that next week is the last of the guild weeks. That made me think that it might be the last of the Ravnica block themes altogether. So I cracked open my Dissension Player's Guide to hunt down some healthy flavor to serve up to you today. And that's when I saw her again.

When I said “healthy flavor,” I really meant it. This gal is literally packed with flavor. She's near and dear to my heart, for reasons that will become obvious in a moment. She's the Protean Hulk. 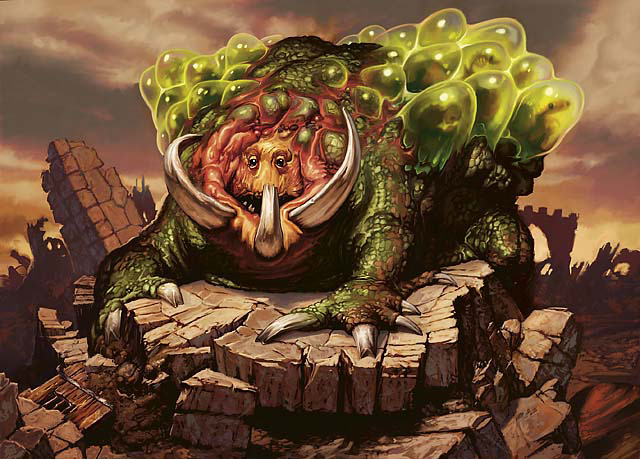 If it's still a mystery to y'all why I am so smitten with the ol' walrus/toad/cow, it's because I got to paint the lovely lady. But that's not what makes her so cool. She actually has a lot of deep-rooted Ravnica flavor that goes beyond her pretty face and the winky-wink of her flavor text. If you don't know the flavor text gag, it's all there in my article “The Long and Winding Road.” No, there's more to this ponderous beast than meat and eggs, and it all starts with the question I asked myself when I read about this monster in my art assignment: 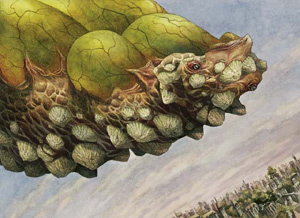 Why isn't this thing a Simic card?

It's green and slightly amphibious and completely strange, just like most of the Simic creatures. It lets you search your library and—that seems a bit blue. It has the same sort of bulbous growths on its back as Assault Zeppelid. This thing should be Simic, right?

Wrong. In fact, the characteristics of Protean Hulk that make her not Simic are the ones that, to me, make her so interesting.

First of all, she's not weird because she has been genetically twisted by Vig and his molecule-meddling underlings. She is weird because she has always been that way—for thousands and thousands of years. While her egg-encrusted back might look really similar to the cytoplasts on a Sporeback Troll or a Simic Basilisk, they are entirely different. Cytoplasts are genetic modifications that allow one species to share the characteristics of another. Oh, and they're blue. The Protean Hulk's egg sacs are completely natural growths that, in contrast to cytoplasts, are hermetic, pure environments in which different species can gestate without intermingling genetically.

This difference was important to me when I started painting her. I wanted to make sure she did not look genetically altered. This is why I showed the eggs developing organically from smaller lumps on her head, fed by the fleshy pink tissue that snakes around and into the sacs. This is also why I chose to show the creature alone, out in the middle of the dry Utvara wastes—to really hit home that this creature is not lumbering about the slick, bioluminescent Simic labs. I also wanted to make her feel bulky enough to carry scads of hungry spawn. I think it's safe to say that this hefty heifer would have no problem supporting a bountiful brood on her back.

But if it's not a Simic mutant beast, what business does this wacky monster have shambling about the city world of Ravnica? 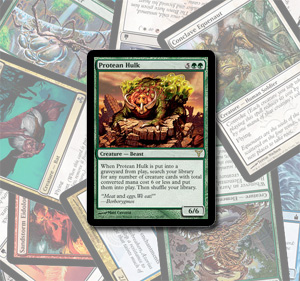 This is a good question, and it applies to more creatures than just this one. Nephilim, Stomphowlers, Molochs, Grozoth, Wurms, Solifuges, and Groodions—what are any of these things doing on the city-plane? The funny thing is, Protean Hulk could be part of the answer as well as part of the question. The solitary Hulks are a species as old as “Carven Caryatid,” older than the Guildpact. Like these other great beasts of old, the Protean Hulk survives out in the outskirts or in the undersewers—away from the territorial humanoids and their guilds. But sometimes the humanoids wander out of the bustling city to witness the might of Ravnica of old. This is when the run-ins with the Nephilim occur (like in the Guildpact novel.) This is when people get eaten by wurms…or Hulks. Take a look at the detail of Protean Hulk's egg sacs. What is that in her egg? It's a humanoid fetus. You see, the Protean Hulk does not get its genetic infusion from the manipulation of cytoplasty, it gets it from its food! Once a Protean Hulk eats something, that something's genetics are thrown in the great genetic soup that swirls through a hulk's bloodstream. Since these great beasts live so long, it's possible for a single Protean Hulk to contain the genetics of a thousand different species. Which ones take root on her back and begin growing may seem random, but an observer who lives to record her offspring over a few hundred years will note that, while the majority of the spawn are random, the Hulks tend to repeatedly hatch the species that taste the best.

And that leads us back to Grozoth and Groodions and such. It is not plausible for so many gigantic monsters to continue surviving in a shrinking, overpopulating, overdeveloping world filled with territorial guilds and brash hunters looking to kill the next biggest thing. This is where Protean Hulk waddles in. Groodion Drool is toxic and stinky, but, to the Protean Hulk, it is like ketchup on a cheeseburger.

Check out the little tadpole to the right. That arched neck, that hooked forelimb…could it be…a Groodion! It could. And let's just say that Jarad, renowned hunter and present-day guildmaster of the Golgari, wipes the undercity clean of all slobbering Groodion-kind—you know, for fun. Because of the Protean Hulks, the Groodion species could still be alive on Ravnica.

It would not surprise me if the Simic did some tinkering with the hulk, only to find that it has more value as the refrigerator of Ravnican genetics than it does as a cytoplast test subject. Though it is not documented anywhere, I would not be surprised to find out that Vig and his predecessors had decreed that the Simic were to protect this species, to keep it intact. It could be the last vestige of their initial guild's role as preservers of the plane's species.

But, this does not make the hulk a Simic creature. No, the hulk is strictly green (ha! The hulk is green!). It's too old world to be Simic, or any other guild for that matter. It might come in useful in a pinch, but it's got too much instinct built up over the millennia to bother with any modern ideals. Could it be a Golgari creature? Perhaps. It does affect the cycle of life, but the card itself does not really have anything to do with the death part of the life cycle. Sure, it's a 6/6 crusher, but we all know it's really all about its multitudinous spawn. Does this make it a potential Selesnyan creature? Perhaps. The Conclave likes to bolster its ranks, but what if the hulk eats a Drekavac—I'm sure they don't want that foul-faced thing singing with the dryads. What about the Gruul? I think Protean Hulk's flavor text tells you just how it would fit into the guild—as lunch. I guess that's what makes the hulk such a perfect green creature, it fits the green nature of all the green guilds.

Strangely, it could be the Izzet who put this beastie to its best use. Since he is the smartest living thing around, Niv-Mizzet does not miss much that goes on in Ravnica. Word at the Wizened Snitches is that he has a few Protean Hulks tucked away in the bowels of Nivix. His entourage of weirds is supposedly instructed to, in the dire circumstance of Niv-Mizzet's impending death, have the Protean Hulks eat the Dragon so that they may contain his genetic material and respawn the Firemind time and time again. It's just so patently Niv-Mizzet to find a way to grace the world with his megalomaniacal mug forever. 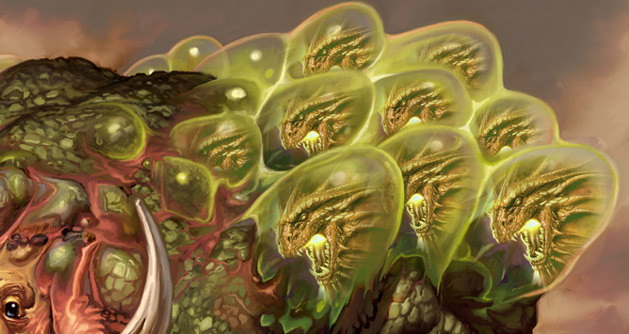 The question is, does the Firemind taste good?

[Ed. Note: Love Taste The Magic? Starting next week, Matt Cavotta will be moving to Thursdays (opposite Mike Flores), while the new MTGO column will be moving in to Matt's old Wednesday slot. Please pass the word on! - Scott]