the card, then the witty banter: 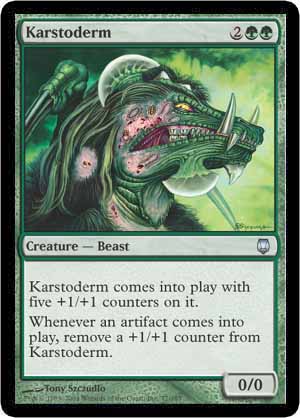 What is a Karstoderm? A cross between a Slippery Karst and a Blastoderm… oh, that’s terrible.

The first green creature with a horrific skin ailment, this creature has a debilitating allergy to metal… ick.

Green clearly hates artifacts. But green is also generous, so now the color has given artifacts a way to hate it back… nah.

What hatches out of a Chimeric Egg? A Karstoderm, perhaps? Though conceptually similar to Anthony’s first Darksteel preview card in that they only like nonartifact spells, these two cards express that preference in opposite ways. The more nonartifact spells played, the more counters on the Egg, and the closer it is to being a big beater. The more artifact spells played, the fewer counters on the Karstoderm, and the further away it is from being a big beater. What does that mean? Not much, except that Karstoderm does NOT like multiplayer games. Next!

What is Skullclamp good with? Karstoderm.

Oh, whoops, that was last week. But it’s true anyway.

Karstoderm has a neat little psychological place in the universe. Does it annoy you that your casual play group doesn’t use that many artifacts? Have they not embraced Mirrodin yet? Load your deck with Karstoderms! A few buckets of beatdown later, your friends will reach for the Karstoderm countermeasures (i.e., any artifact ever printed). Then you can respond to their response with a suite of artifact-blower-uppers (Shatter, Shatterstorm, Shattering Pulse, pretty much anything with “shatter” in the name) that will happily dismantle their new brown- & silver-framed cards. That’ll show ’em. Bend them to your will! Make them dance like marionettes! YOU ARE THE PUPPETMASTER!!! Or not…

It’s the newest addition to the family of 4-mana 5/5 green creatures with a drawback. Jade Leech! Blastoderm! Emperor Crocodile! They were all so tantalizingly tempting in their day. Expand the list to include even bigger and even cheaper beatdown machines and we’ve got Hunted Wumpus, Springing Tiger (look at it this way: it’s a 5/5 for

that gets -2/-2 if you don’t have threshold), Pangosaur, Mungha Wurm, Argothian Wurm, and Tempting Wurm. Once you establish the standard of size & cost, the interesting variable becomes the drawback. And the interesting deckbuilding consideration becomes how to evade the drawback.

Here’s the first tip when sliding Karstoderm into a card sleeve for use in your deck: Don’t sleeve any artifacts along with it! You don’t want to shrink your own creature, do you? And now that I’ve laid down the law, I’m going to immediately break it. Refreshing your Karstoderm seems like a good idea, so the first thought I had was to combo it with Crystal Shard. If your opponent plays enough artifacts to reduce Karstoderm from Rhox-size to Spore Frog-size (Aisling Leprechaun-size? Freyalise Supplicant-size? Juniper Order Druid-size?), just pick it up and plop it down again.

What else is good with Crystal Shard? Anything with a comes-into-play effect. There’s Duplicant, of course… and that’s the last artifact in the deck. Viridian Shaman punishes your opponent for shrinking Karstoderm, Sage Owl puts your deck in order, and Wood Elves pulls out mana. The Shard elevates Clone to near-Doppelganger status. Add some bounce and some mana acceleration, and Karstoderm has a home.

OK, that worked. But let’s give it one more shot.

Cards don’t exist in a vacuum. They’re very much products of their environments. In the ongoing experiment known as Mirrodin, we’ve seen that the power level of Shatter depends on what set it’s part of. Welding Jar is a great little card in Mirrodin, but it would’ve been awful in Onslaught. Wirewood Savage was a perfect Onslaught card, but imagine how lost it would have been as part of Mirrodin. In almost every notable case, a card’s relative value has been increased by its inclusion in an environment where it has synergistic connections. The card is merely decent on its own, but the overarching block mechanic makes it good.

What if this were reversed? What if a powerful, undercosted card was instead intentionally handicapped—rather than helped—by its set?

Poor Karstoderm. If this card popped up in Legions, it would have been incredible. Or imagine its power level if it had a Mirari-on-a-stand expansion symbol instead of its shield. It would have been a pretty-much-vanilla 5/5 for 4! But here it is, in the middle of a set in the middle of a block riddled with hundreds of artifacts—and it’s got a heck of a rash. Karstoderm is very much a product of its set, much to its chagrin. This has happened before, though rarely: Think about Glowrider popping up in Legions.

So what can be done about it? Everyone is playing with a bazillion artifacts these days, making Karstoderm a reasonably suicidal critter. And that suggests a strategy all its own. A “damned if you do, damned if you don’t” strategy to tie your opponent in knots. And much of the credit goes to Karstoderm’s bestest friend in the whole wide world, Molder Slug. Think about it: Karstoderm on turn 4. Molder Slug on turn 5. That’s 9 power worth of Beasts. If your opponent plays an artifact, the Slug will eat it. If your opponent plays no artifacts, Karstoderm’s skin irritation doesn’t bother it at all. 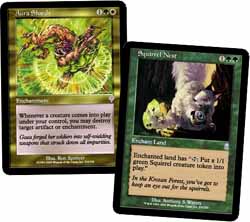 Another fine card in the same vein is Aura Shards. For obvious reasons, Mirrodin didn’t specialize in repeatable artifact destruction. And the last few blocks preceding it didn’t have many artifacts at all. But Invasion has a couple of very compelling artifact hosers. Aura Shards is a direct challenge to your opponent: “I dare you to play an artifact.” When every creature you play is a Viridian Shaman, artifacts become fragile. When you’ve got a Squirrel Nest on the board too, artifacts become as fragile as a Ming vase packed by Frankenstein and shipped via the Pony Express. Artifact Mutation is also a fun little number: Replace the

in Shatter’s cost with a

and you get seven Saprolings as a reward for blowing up a Myr Enforcer. The Mutation is another example of environment-affected value: While it was nothing special during the time of Invasion, now it seems absolutely bonkers. (Ahh, thematic closure—gotta love it.)

Until next week, introduce yourself to Karstoderm!
Mark