(to steal a line from Mike Flores).

I'm impressed with the turnout for my three days of Emperor Fun. Thank you all for showing up, both while I was there and throughout other parts of the day. I apologize to those folks who complained that the only time I could reliably find time to play started at 9pm Pacific. Thankfully, though, by all accounts it sounds like people started countless Online Emperor games of 2-2-all throughout last week. I've received dozens of testimonials from people who said that their Emperor experience during my "days of fun" was some of the most enjoyable Magic they've played. As a result of the turnout and good times, there will definitely be more crazy, experimental events like this in the future. Next time, too, Alongi promised to get a Magic Online account.

Here are my notes from the three days...

Tuesday, September 7th: The Door, the Egg, and the two Thumbs 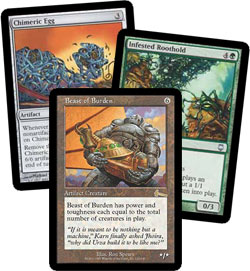 Unfortunately, although I played for over three hours each evening, I only managed to play two complete Emperor games a night. In this case, however, I would definitely say I achieved quality over quantity of games, which seems to be the way with multiplayer.

When I initially showed up on Tuesday evening, I was surprised to find that not only were there several "JMS-style" games already in progress, but they had been going on during most of the day (each had dozens of spectators as well). As a result, I didn't need to start a game so much as find one to join. AJ_Impy had started one just as I logged in, so I sidled up to him as his flanker with the following deck:

Terribly creative? Not really. But it was a deck I thought better suited to a flanker-style than an emperor. If you can't tell, the idea is to generate a bunch of tokens and attack with them. Chimeric Egg, Infested Roothold, and Beast of Burden can be just downright silly in multiplayer Standard.

AJ_Impy played a cycling deck with Sizzles and Kaboom!, while UsuckImgood, the other flanker on my team, had a Door to Nothingness deck inspired by my Prismatic vote of last week. That's right: My team consisted of Kaboom!, Beast of Burden, and Door to Nothingness strategies.

The opposing team was a little less bizarre. TRDTAZ (from my 1-1-1 game two weeks ago) played a fairly standard Goblin deck as a flanker, while his emperor NyteSpyder brought a Sunburst deck. KevMoney, the flanker across from me, played a deck with Cloudpost, Sage Owl, Planar Portal, and a ridiculous array of five-color things.

Some highlights from the game, at least from my perspective:

Both Randy Beuhler (rbeuhler) and Mark Gottlieb (Doctor Wombat) were online playing in other 2-2-all Standard Emperor games throughout the evening. We joked that it would be fun to make a team. Mark and I were available at the same time, but Randy--who had just fallen victim to Mindslaver with two Etched Oracles in his possession--said he was going to be awhile. Mark and I decided to forge ahead without him, bringing our two craziest decks. Here's mine:

I'm the emperor, Mark was my flanker, and my other flanker was NyteSpyder, the emperor from the first game who lost to Door to Nothingness. This time around he played a red/green deck built around Isochron Scepter. The opposing team, meanwhile, included UsuckImgood (again) with Door to Nothingness (again), saurionsoul was the emperor with Clerics, and Goblin Game brought a Dragon deck.

Some highlights from the second game: 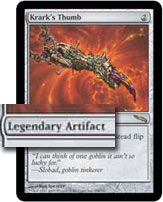 This time there aren't any 2-2-all Emperor games in progress or in the queue, so I'm able to start my own as emperor. I bring this little number: 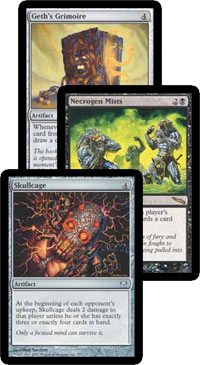 It's not a nice deck for my flankers, but it's even worse for the opposing team. Basically I threw about every nasty black multiplayer card together into what is probably my most effective deck of the week. If this format continues to be played, I'm assuming that monoblack will be one of the most-played (and most prepared-for) decks.

UsuckImGood showed up again, this time as an opposing flanker with his Door to Nothingness deck. Elfsea was the opposing emperor with a red/green deck full of good stuff. Ralstar30, the other opposing flanker, played black/white Clerics. My team was Jadzia with an Elvish Piper Beasts deck and Karnme22 with monored Affinity.

During the game I get a second-turn Withered Wretch, third-turn Necrogen Mists, fourth-turn Geth's Grimoire. That's a brutal start and really lets me stay in control of the game the whole time. I play two Skullcages, steal Ralstar30's Battlefield Medic with Beacon of Unrest, and then steal my own flanker's Sculpting Steel to make another Skullcage. Karnme22 gets some early beats in before dying to the Clerics, and Jadzia makes a 13/13 and 9/9 Feral Throwback with Totem Speaker on the board. The Beasts smack around UsuckImGood, then finish Elfsea. Many spectators agree that my deck is too evil for words, so I'm happy to switch-up for the next game.

My game finished pretty quickly, so I was feeling good about my chances at squeezing in two more games. Unfortunately, like a bonehead I tried being emperor with a lifegain deck. One should not expect a quick game when bringing a lifegain deck.

This time Elfsea showed up to be my flanker (Yes, I probably should have required a mix of people to join my games. There were dozens of spectators each game so I naively figured that they would join in when each game started. This is a lesson for next time I try an experiment like this). Elfsea had a monoblack deck with Disciple of the Vault, lots of mana, and goodies like Spellweaver Helix and Reiver Demon. UsuckImGood, who is clearly stalking me, played as my other flanker. The opposing team was nateetan with a monogreen Elf deck, Fujin Akari with a white-weenie Equip deck, and the opposing flanker was MacSquiz with a Sunburst deck.

The game turned out to be a marathon, but it was also one of the finest multiplayer games I've ever experienced. My team gets the "Oops. I Suck" award for managing to miss winning the game no less than four times, while the other team gets the "Wow. I So Don't Suck" award for staying alive and capitalizing on our brain seizures.

Some highlights, though I'm not sure I can do the game justice:

Our general idiocy might have been irksome except that so many great and fun things happened throughout the game that we all died laughing. MacSquiz's team played beautifully too. Magic is best, I think, when people die laughing.

People who have been watching the game buzz about the craziness of it and its excellent finish. Another two games of 2/2/all are starting but it's late and I'm wiped out. Whew!

Thursday, September 9th: The Big Stinger and Return of Kaboom!

The third night rolls around. I was clearly tired from a long day at work because although I meant to bring this deck as a flanker:

I instead accidentally brought the first deck from Tuesday, the monogreen token deck. Oops.

In any case, CJG_0000 was my emperor, sporting a "cog" deck (Leonin Elder, Disciple of the Vault, Leonin Squires, Auriok Salvagers, etc.). UsuckImgood, who is most certainly stalking me at this point, was the other flanker bringing his ever-present Door to Nothingness deck. The opposing team consisted of Battlemages--with a monoblue Wizards deck he adamantly swore wasn't a Wizards deck--as a flanker, goblin_recruiter as the other flanker with a monoblack deck, and CPA Alliance the Orgg with Affinity as the emperor.

The Orgg laments the fact that he's emperor since his deck is clearly meant for attacking. As it turns out, though, his worry is unfounded.

For my last game of the evening, I chose another lifegain deck. After the lengthy session of the previous evening I was a little wary of doing so, but I figured that this wasn't lifegain in the traditional sense:

I was a flanker again, and goblin_recruiter showed up this time as my emperor. The other flanker was Nodge with a black/green morph and discard deck. The other team consisted of AJ_Impy with his Kaboom! deck as a flanker, Hukima with monoblack Zombies as the other flanker, and Battlemages' not-Wizards-Wizards deck as the opposing emperor.

The second game ended with an awkward amount of time left in the evening. I could have played a third game and stayed up reeeeaaallly late or stopped at a relatively early night. Since the next morning was the deadline for my article, I wisely skipped the opportunity to play my Metal Haters deck.

It really was a very fun week. People played a spectacular diversity of decks. No one strategy, be it discard, burn, aggressive, control, lifegain, etc. dominated the tables. The mood in all of the games was light-hearted and pleasant. Games ran long, but only because they were highly interactive amongst all players. Spectators even seemed to enjoy it. Honestly, these days of Online Emperor were even more fun than my friends playing around a dining room table, which is all the more impressive given that everyone involved were relative strangers to one another.

Let's not rest on our laurels, though. Just because there isn't an "official" Emperor event scheduled this week is no reason to lapse back into a "1-1-1 only" environment. For folks who like the 1-1-1 format, feel free to play it with abandon. For those who don't, advertise another Emperor format and recruit others to join. I'll definitely be swinging by the Multiplayer room to play now that I've experienced Emperor in its various forms. I'm hooked.

Coming up next week, building a really big door...