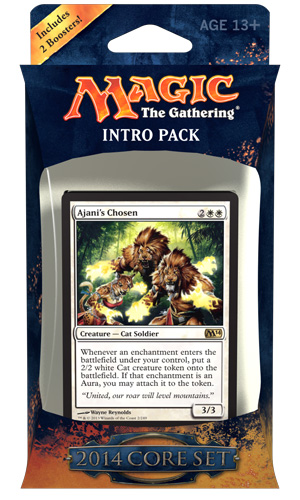 Enhance your creatures with Auras to become powerhouses in combat. Any damage your opponent deals to you will quickly be undone with your life-gain spells.

Powerful Auras like Trollhide and Indestructibility make any creature nearly unstoppable, but you can get the most out of your Auras by being clever about which creatures you enchant. Dawnstrike Paladin and Serra Angel both have vigilance, making them especially potent choices to power up. Try to spread out your Auras among multiple creatures, creating more threats for your opponent to deal with. Consider waiting until your opponent's lands are tapped to minimize the risk that your creature is killed when you try to put an Aura on it.

This deck boasts powerful life-gain spells like Congregate and Elixir of Immortality, as well as a few great tricks to combine them with. Voracious Wurm enters the battlefield with a +1/+1 counter for each life you gained this turn, and Angelic Accord grants you a 4/4 Angel every turn you're able to gain 4 or more life. A great thing about having lots of life gain is that you can shrug off your opponent's small creatures and save your Pacifism and Hunt the Weak for bigger threats.

Additional Magic™ cards from the Return to Ravnica™ set that can further power up your deck include Ethereal Armor, an Aura that gives a creature +1/+1 for every enchantment you control, and Heroes' Reunion, a two-mana instant that gains you 7 life. The Magic 2014 core set's Archangel of Thune is incredible in any deck with creatures and white mana, but this deck's life-gain spells really make the most of its abilities.

1 Elixir of Immortality 1 Staff of the Sun Magus 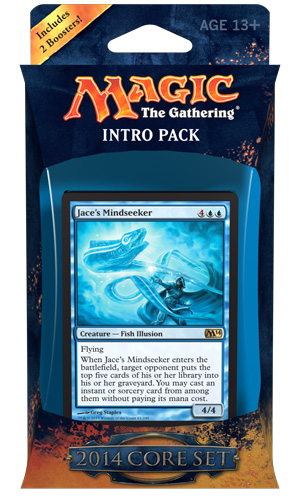 This tactical deck focuses on controlling the flow of combat. Efficient flying creatures backed up by versatile support spells will allow you to sculpt your path to victory.

Your primary plan is to play out some early attackers and then use your spells to stay on the offensive. If you have a Scroll Thief, use your spells liberally to get it through and draw more cards. Frost Breath and Master of Diversion can tap down blockers, and Show of Valor allows you to attack even if your opponent has a large creature on defense. Consider saving Claustrophobia for serious threats because it's your best way to permanently lock down a creature.

If you should find yourself on the defensive, those same spells are also great at slowing down your opponent's attacks. A good strategy in this situation is to keep attacking with your fliers while you slow the enemy down with spells and blockers. As the game goes on, you'll gain access to powerful flying creatures like Air Servant and Jace's Mindseeker. If your air force can finish off your opponent in time, you won't need to worry about his or her army! By using a variety of spells, you can keep your opponents guessing.

The Magic 2014 core set card Domestication can steal one of your opponent's creatures over to your side, and Windreader Sphinx is a great creature to close out a long game. Azorius Charm from Return to Ravnica can put a creature back on top of your opponent's library, or grant all of your creatures lifelink for a turn.

1 Staff of the Mind Magus 1 Rod of Ruin 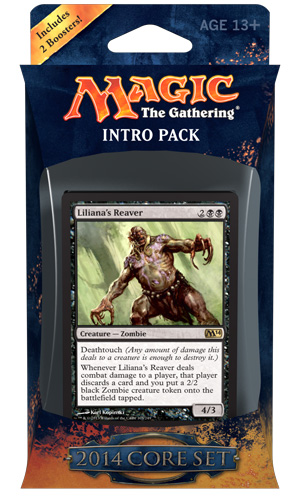 This deck comes out swinging with aggressive creatures that quickly put your opponent's back to the wall. You'll close the deal by making whatever sacrifices are necessary to secure victory.

Your goal in the early turns of the game is to play as many creatures as you can and keep turning them sideways to attack. Instants like Wring Flesh and Thunder Strike let you continue the attack even if the opponent plays a blocker. Make sure to use your spells to clear a path for the devastating Liliana's Reaver whenever possible.

Heavy hitters like Sengir Vampire and Vampire Warlord are in this deck to finish things off in the late game, but this deck is also capable of finishing things off outside of combat. Gnawing Zombie and Barrage of Expendables let you turn each of your creatures into additional damage. Try to avoid trading your creatures for your opponent's early on so that they stick around to sacrifice later. In particular, make sure your opponent doesn't catch you without

to reanimate your Tenacious Dead, because later in the game you can sacrifice it over and over every turn!

Look for cards in Magic™ booster packs that fit in with this deck's strategy. Goblin Rally from the Return to Ravnica set creates four Goblin tokens for one card — the perfect sacrifice fodder! Dark Prophecy from the Magic 2014 core set lets you draw a card every time a creature you control dies, which is all part of the plan with this deck. Finally, Shadowborn Demon is a giant flier that asks for a sacrifice unless you have a large graveyard, both easy requests for this deck to accommodate. 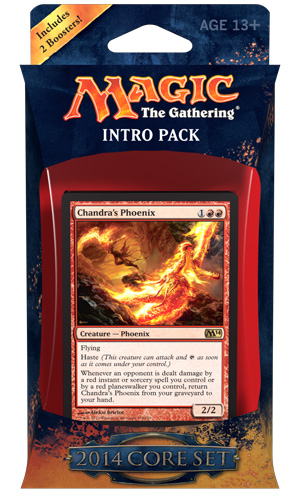 With this deck, the key to success will be getting your creatures to connect with your opponent's face. By combining red's raw power with blue's trickery, you'll make sure your haymakers hit their mark.

Some of your best tools for getting creatures through your opponent's defenses are actually your other creatures. Trained Condor and Goblin Shortcutter can both clear a path for a hardhitting creature like Regathan Firecat. If the creature you sneak through is a "firebreather" like Dragon Hatchling or Shivan Dragon that lets you spend unlimited red mana to boost its power, your opponent is sure to feal the heat!

This deck also includes an arsenal of powerful spells. Red "burn" spells are best used to kill opposing creatures and clear the way for your own. Disperse provides another way to temporarily remove a blocker or to throw off your opponent's calculations during combat. Among your most powerful cards is Shiv's Embrace, an Aura that gives any of your creatures firebreathing. Try to wait to cast it until your opponent is out of removal spells or you can protect your enchanted creature with Negate.

One of the best things about the red-blue color combination is its versatility, and adding more Magic™ cards to your collection will let you take this deck in the direction you like best. If you enjoy burning your opponent to a crisp with red damage spells, try out Annihilating Fire and Explosive Impact from the Return to Ravnica set. Or if blue trickiness is more your style, Cyclonic Rift can instantly return every nonland permanent your opponent controls back to his or her hand. And always keep an eye out for more Dragons!

2 Flames of the Firebrand 3 Lava Axe

1 Staff of the Flame Magus 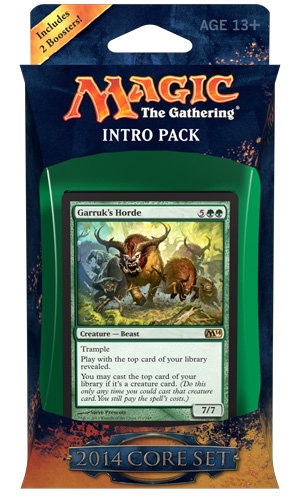 Unleash the fury of the wild as you outmuscle your opponent with bigger, better, and faster creatures. You'll have the advantage in combat because your creatures will be larger than your opponent's at each stage of the game.

There are several cards in your deck that can help you bust through a strong defense. Even the toughest blockers can't withstand a Vial of Poison. Doom Blade can slice through any single creature, so try to save it for one of your opponent's best. If your opponent tries to gang up on an attacking creature with lots of smaller blockers, your creature-boosting spells will be devastating. Cards like Giant Growth and Briarpack Alpha are perfect for making sure combat goes your way.

Your trump card in a standoff is Enlarge, which gives one of your creatures +7/+7 and trample and forces your opponent to block it with at least one creature. Not only does it deal a massive blow to your opponent's defenses, but it will often allow your other creatures to get through for damage, too. If you need more time to break through, use Plummet, Deadly Recluse, and Giant Spider to hold off enemy fliers.

There are a multitude of powerful creatures in the wide world of Magic™ that would fit right into this deck. Deadbridge Goliath from the Return to Ravnica set is a 5/5 creature for only four mana, and after it dies, you can scavenge it to put five +1/+1 counters on another creature. The Magic 2014 core set features the unstoppable Kalonian Hydra, which begins as a 4/4 but doubles in size every time it attacks. Within just two turns, your opponent will be staring down a 16/16 trampler!

2 Vial of Poison 1 Staff of the Wild Magus