Magic there are a very few really iconic Fantastic Creatures. Vesuvan Doppelganger is on the back of some tee shirts, and Hurloon Minotaur somehow became the poster boy (bull) of the 1990s, but among the tournament caliber Fantastic Creatures, one veteran of Alpha flies head and shoulders (and cleavage, and wings of light, and sword of faith) above all others: Serra Angel.

There are many reasons why Serra Angel was the first Cadillac of Magic creatures. From a historical perspective, she was the finisher chosen by the great Brian Weissman in his platonic form of control, The Deck. Brian elected to play two creatures – twin Angels – to win after locking his opponent with Disrupting Scepter. The presence of creatures at all was important because it created a position where the opponent would be forced to at least consider playing with creature elimination in even post-sideboarded games, whereas a Jester's Cap or other non-traditional route to victory might let him play a more perfectly efficient defense (all Disenchants, say). While Weissman sometimes played a “gambit” game with a pre-Scepter lock racing Angel, the creature-poor-rather-than-creature-less strategy was one that necessarily incorporated waiting.

Beyond the inefficiencies sometimes forced in the opponent's sideboarded games, this creature-poor was actually a deliberately efficient choice for the first great control deck. You see unlike some other paths to victory, a creature doesn't just swing. Flying let Serra Angel soar over the opposing battle-lines, but via the underrated Vigilance (pre-keyword, and at a savings of S1 no less), she could also block and race. Even better, Serra Angel fought with a relatively bodacious rear end, and could therefore contain, if not flat-out defeat, most incoming monsters while Brian managed everything else.

Besides carving her initials into the stone tablets of the control player's manifesto – and starting as an All-Star since 1993 – Serra Angel was also a hero of the early Pro Tour. She was featured both in Canadian Champion Eric Tam's Top 8 deck and in finalist Bertrand Lestree's G/W Armageddon deck. Rather than being played as “just” a role playing finisher in control decks, Serra Angel contributed to creature decks next to Erhnam Djinn or at the top of a White curve starting with Order of Leitbur or Savannah Lions. Additionally, Serra Angel's relative efficiency and multiple areas of effective specialty made it a perfect candidate for Surprise! sideboards. U/W Millstone decks played the world's most effective Durkwood Boars in their sideboards for years, but it was likely George Baxter's 1996 U.S. National Championship finalist deck that made best use of the card. Not only was she equally effective as she had been in every previous situation, but the hot new deck of that Nationals – putting multiple people in the Top 8 and the Team itself – was a Stasis deck… Never before or since would Vigilance (pre-keyword!) be so important a metagame bonus.

All of this goes to say that when the card was rotated out of Standard, and we tried every possible Abbey Gargoyles as “replacements” in our mid-range White creature decks, and embraced the Herald of Serra at least to start (Tolarian Academy quickly ended those attempts), we as a community all solemnly acknowledged that Serra Angel was retiring as a wildly overpowered card that had to be removed for the continued viability of Standard Constructed. It is with this pedigree that we welcome the newest “take” on a classic Angel template to the world of Constructed Magic: 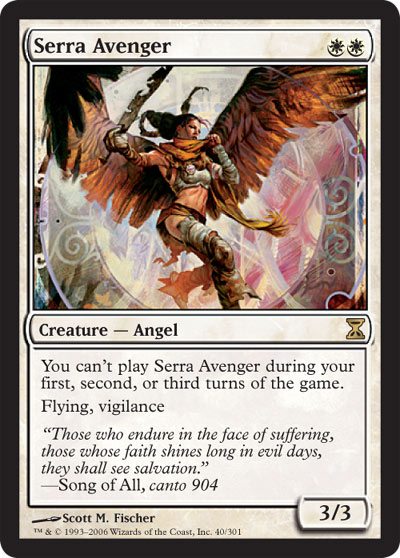 I'll let you in on a little secret: I look forward to the new set preview articles just as much as you do. Okay, that probably wasn't so effective a “secret.” The actually secret bit is that while I look forward to the new sets – and let's be honest, between Heartbeat of Spring, Ink-Eyes, Promise of Bunrei, Hand of Cruelty, Lightning Helix, Burning-Tree Shaman, and Spell Snare, not to mention pre-Swimming With Sharks previews like Ravenous Baloth, they haven't been pulling the punches with mine – I am also a little apprehensive when writing these. Look at that card. No, no. I know the artwork is fantastic. Look at the cost. Look at the stats. What are you supposed to say about a card like Serra Avenger?

When Zvi wrote about Watchwolf, he basically said that if you have Green and White mana, you play this card. What am I supposed to say about the same card, but with half the specific colored mana requirements, and a million special abilities? Of course you play this card. This is one of those cards that you build a set around, not just a deck.

That whole bit at the beginning of the article, about Weissman methodically sculpting a board where his Serra Angel was an invincible offensive and defensive weapon before making the five-drop play, was to show that in the proper control deck, this card has no real drawback. While a control deck that runs Serra Avenger – like the unusual build that chooses Watchwolf as a speed bump, say – might want to play it on the second turn to slow down bears or trade early, such a deck will still be fine playing this card in the middle or late turns. In fact, should such a deck play Serra Avenger as an actual finisher rather than just a sideboarded Volcanic Hammer or Spell Snare (like the Magnivore deck sometimes does), that deck might actually prefer to drop the Avenger when it can protect it, by Scepter or Muse Vessel lock, by massive card advantage, or by a fist full of Spell Snares. For example, Morphling, that “fairly” well appreciated 3/3 control creature from Urza's Saga, has a printed mana cost of

… but few and far between were the successful Blue mages who would summon that shapeshifter with fewer than six mana in play, specifically leaving up free Blue. Later in its Block career (and driving into the following Standard formats), Morphling inspired the use of Grim Monolith in “fair” Blue decks (as opposed to “unfair” decks with cards like Tinker), just to get the favored fatties in play at a faster clip than the ponderous basic Island might be used to. While it might take a bit of stretching of your Magical brain, think about Serra Avenger in some control decks as some kind of queer 3/3 for

or so that untaps 2-3 lands when it comes into play.

While both of Serra's vigilant Angels can work in decks on either side of the metagame spectrum (as kind of an opposite number to her iconic template), the more obvious place to run Serra Avenger is in a beatdown deck. In this case, the prohibition on early turn play may be of some concern, but I think that the redundancy of White beatdown decks in recent months will go a long way in alleviating any conflict and smoothing over any apprehension that competitive players will have in including this card in their offensive listings. Consider the modern Boros deck. Though it shares colors and some spells with the States-era deck, which was all about Lantern Kami, Suntail Hawk, and Glorious Anthem, the modern version of this deck is all about cards that all do the same thing… It's just that some of those cards do those things somewhat better than others in certain situations. 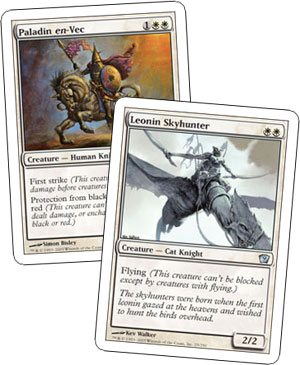 The deck is basically 20 2/2 creatures (okay, Savannah Lions is 2/1) for one, two, or three mana, 20 lands, and 20 “stuff” (mostly burn spells). In the offensive abstract, there is no difference between Savannah Lions, Isamaru, Kami of Ancient Law, Hand of Honor, Leonin Skyhunter, or Paladin en-Vec. In fact, you can make the argument that Savannah Lions is often a better card than the nigh invincible Paladin en-Vec when Boros is on the attack. It is only in specific matchups where the differences come into play. Paladin en-Vec may be Dominaria's best speed bump, but Hand of Honor is better at fighting other Paladins and trading with Watchwolf. Kami of Ancient Law is kind of a slow-witted Hound of Konda… unless you are up against Eminent Domain, Heartbeat of Spring, or some other enchantment-reliant Blue deck. Unless the opponent has relevant creatures to block, Leonin Skyhunter (a minority inclusion in the archetype) is just a Grizzly Bears. The deck basically does the same thing with essentially the same cards from turn 1, spending free mana to clear a path or send burn cards to the opponent's dome.

Serra Avenger fits in perfectly in a deck like this for two reasons: 1) Because of the extreme redundancy built into the deck, it doesn't matter that she can't show up on the first turns because some sort of Spirit, or Lion, or some other kind of Cat will cover for her until she is good and ripe, and 2) Boros with 20 lands doesn't have a lot of spare mana anyway, so tapping for her mid-game instead of some 2/2 might actually be a call for celebration: Don't be surprised if the rotation of Umezawa's Jitte obsoletes Paladin en-Vec to some degree, making this creature the preferred drop in Standard Boros.

I know you are probably very excited, as I am, about Serra Avenger… But from what I've seen and heard about Time Spiral, as good as she is going to be, this 3/3 for two mana is not even the tip of the iceberg. I didn't know that it was possible, but I think R&D have got me more excited about a new set than I was about Ravnica Block! Moving from one iconic Alpha update to another, check in next week when we learn to blow everything up a brand new way for 2006.