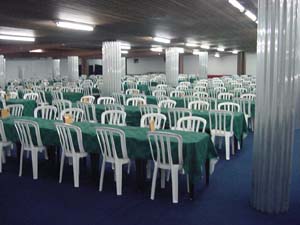 The first weekend of the Extended qualifying season couldn't be set in two more different cities: Las Vegas and Curitiba. While the gambling hotspot is a recent city born in the desert and heavily centered on providing specialized tourism, Curitiba dates back to the seventeen century but was always strive to keep up with times and gives its citizens the best possible environment.

In a behemoth country whose capital, Brasilia, is the beautiful result of an architectural experiment, Curitiba (capital of the Parana state) has undergone similar, yet less radical, changes over the years. One of its most striking statistics is having fifty meters of green area per inhabitant, way above all UN recommendations.

But enough sightseeing and let's get down to business. If all eyes and centered on Las Vegas waiting for the latest Extended tech from the top pros some might be in for a surprise from the south. In recent years Latin American players have been working hard to earn themselves a deckbuilding reputation similar Asian players. Maybe this weekend

The format seems ripe for discovery. Both Godzilla and a group of American players pushed Donate to a new level in New Orleans, by adding Red to solve most of its troubles, while two other American teams (CMU and YMG) rehashed Reanimator decks with great results.

The widespread knowledge that the acclaimed best deck in the format (Red Donate) is now packing sideboard Ruinations makes non-basic heavy decks a big gamble. This makes Junk, Three-Deuce and Finkula riskier to play. As if this wasn't enough Donate now follows the path first laid by Stasis (curiously possibly one of the its strongest foes) with a transformational sideboard that enables it so switch to TurboMorphling on the second, and third, game screwing all "Silver Bullet" anti-combo sideboard plans. The clock, at least for now, belongs to Donate. No other deck can match it for consistency, adaptability and speed.

So sit back and enjoy your weekend while two rooms full of Magic players, thousands of miles apart try to find a gap in this exciting format. Will Donate rule the day once again? Will large monsters out of the graveyard prove the right answer? Check out the coverage and we will tell you all about it.