Scott Johns told me this column might become available for a new writer, I was pretty excited. Not only has Magic Online been my primary outlet for the game over the past couple of years while I was living and working in Germany (which, as everyone knows, has no Magic scene whatsoever), it is also a place where the true spirit of the game thrives – the spirit of casual play. 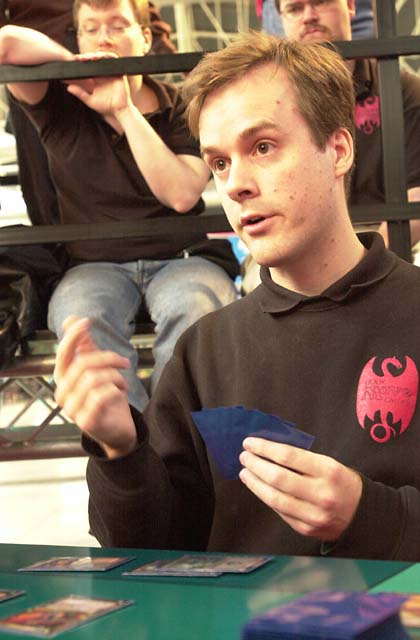 Don't get me wrong, I'm a competitive Magic player. I spent years qualifying for the Pro Tour, managed a Top 8 in Barcelona and, now that I'm back in the gaming world, I'm going to qualify for the Tour again. But a big part of Magic for me is still back in the day when my brother and I sat at our kitchen table with two friends and played big multiplayer battles.

That was when no one (or at least no one we knew) had four of every rare – heck, there was a good chance you'd open a rare you'd never seen when you bought a new handful of boosters. Draft? What's that? We didn't even know what sanctioned constructed meant. Our decks were big piles of cool things. My brother had a bit of a thing going with Kithkin, who he would enchant into an awkward-to-block cutie. Geoff liked to win games in unusual ways, like Millstone against three other players. Brian had the biggest card pool and was able to put together actual strategies, like Nevinyrral's Disk and regenerating creatures. But in the end I had a big advantage in our group because I was the only one who owned a Jokulhaups – and no one really played with much instant-speed creature removal. Every now and then I've be able to tap Mana Vault, sacrifice a Forest to my Orcish Lumberjack, Jokulhaups with ten mana floating in my pool, Lhurgoyf, Autumn Willow, good game.

So what Scott and I discussed was the possibility of a holistic column that bridges the various interests that bring us to Magic Online. We'll cover the needs of the Pro Tour aspirant who uses Magic Online as a training ground, discussing the benefits of online training and the potential drawbacks you have to be careful of. We'll look at those for whom MTGO is primarily an outlet for our compulsive need to draft (this described me pretty well while I was in Germany), the Online-competitive player, the traders and dealers, the Two-Headed Giant fanatics, all the way to the folks playing formats that only really exist online.

In short, we'll be looking at Magic Online as a piece of software (including looking at some of the behind-the-scenes programming challenges of trying to code a game where single cards may have pages of errata), as a learning and training tool, and as a community. Hopefully this column will provide some useful ideas for the experienced MTGO player as well as providing a good entry for new players.

And wherever you hang out on Magic Online, you're going to see me. I work from home now (Rob Dougherty and I are designing our own games for release this year) and I have a two-month-old daughter who doesn't always think her sleep schedule should fit ours, so I may be on at any moment.

I'll be haunting the trading post, picking up tips on how best to turn your draft rares into extra tickets or how to turn tickets into the cards you need for your constructed deck. I'll be playing around in all the casual formats, letting you know what's out there as well as suggesting some decks for fun and decks for blood. I'll keep you up to date on the major online events and the MTGO metagame and community.

When you see me, either in my Wizards account (same name as this column) or on my personal account (Chad Ellis), send me a message and tell me what you love (or hate) about Magic Online, or what you'd like to learn more about.

“Hang on,” you may be wondering. “You mean you're going to talk about bad stuff, too?”

You'll notice above that I've mentioned a few things that don't normally appear in company-sponsored websites. Programming challenges. Problems of using MTGO as a training tool. The things people hate, as well as love.

Well, the good news is that there isn't anything wrong with Magic Online. It's more or less perfect. There are only challenges to the player using it! I'll be talking about some of those challenges, starting today with what MTGO can do to (as well as for) a player in training.

First, some of the good points. We'll cover these and other points more in-depth later.

Enemies to fight. The most obvious is that MTGO provides a never-ending stream of opponents, an invaluable resource. Even people fortunate enough to play at a Magic center like Your Move Games can't get a draft going as easily as you can from East of East Cupcake. The same goes for constructed. Pick a level of seriousness, a format, add any other opponent-specifications you've got in mind (e.g. no Ravager, or only Ravager), and you've got a match going in minutes.

Speed and convenience. Shuffling on MTGO is virtually instantaneous…something that saves a LOT of time if you want to do twenty practice matchups. Putting together a test-deck online takes minutes. Want to change your sideboard? No need to dig through binders or boxes; the changes are a few clicks away.

It works THAT way? No matter how many tournaments I play, I'm always surprised by the number of people who don't know all the rules and timing tricks of the cards they play. MTGO tends to teach you the timing tricks as you go, and will quickly disabuse you of any imaginary combination that doesn't quite work.

And now…a few of the drawbacks.

MTGO can make you lazy, especially if you're drafting. Click once, and your cards are sorted by color or casting cost. Click again and specific cards or entire colors disappear, so you aren't distracted by the chaff. This is great if you don't want to deal with the hassles, but memory is like a muscle – stop working it and it stops working. Lately I've been forcing myself not to look at my “drafted” pool except at the end of packs (to simulate the brief look you get between packs in a serious draft). The same laziness is the downside to instant shuffling and the fact that MTGO will always remind you that you can make your opponent lose life to your Disciple of the Vault. Unless you exercise some self-discipline, you may find yourself making mistakes in offline play that aren't relevant online.

Some combo decks simply won't work. MTGO doesn't yet have the ability to handle unbounded loops, let alone combinations where you can repeat a general activity as often as you want without an exact sequence repeating. Mad deckbuilder Rob Dougherty has built a Cleric deck and an Elf deck that can go infinite (the Elf deck can do it in a few ways), but on MTGO he has to settle for gaining a hundred or so life with the Clerics and with the Elves he can't come close to the deck's full potential. In an offline game you can demonstrate an engine and your opponent will scoop – if she doesn't, you can keep running through the engine until she gets the message or until you've won game one with two minutes left in the match. MTGO's clock won't let you do that!

MTGO only gives you the stops you ask for. If you want to use your Auriok Transfixer to tap a Great Furnace during your opponent's upkeep, you need to have a stop set during your opponent's upkeep. We've all either won or lost (or both) games because someone didn't have a stop at some important part of the attack step. Worse, a misclick can happen easily – much more so than the offline equivalent. You have to take the time and play precisely – but that discipline bears its rewards offline.

Magic Online is a new world for the game we all love. I'm looking forward to exploring it with you over the coming weeks.

Hugs 'til next time,
Chad Ellis
Team Your Move Games