It’s Not That Kind of Green Card

Quick Quiz: What is the best Green card in Standard today?

If you said anything other than "Sakura-Tribe Elder" from Champions of Kamigawa, you haven't been paying attention to Constructed Magic for the last year and a half. The unassuming Rampant Growth with legs… err… scales hit the scene running, absorbed Arcbound Ravager collisions in its rookie season while setting up its master's mana, then just kept rolling while the rest of the format fell backward. Sakura-Tribe Elder has both facilitated Forest-filled Blanchwood Armor attack decks and enabled all manner of polychromatic control and even combination options; thanks to its twin areas of expertise – buying time and manipulating mana – these decks, developing engines as far afield as Enduring Ideal, infinite Hana Kami recursion, and Heartbeat of Spring Transmutation, have won tournament after tournament.

Those are not Green cards you say?

The game's most time-consuming one mana artifact and the Clouded Mirror of Victory seem awfully Green to me. The polarizing Sensei's Divining Top, called by some the best artifact in Kamigawa Block – a block, remember, that featured the ubiquitous Umezawa's Jittes – is played almost exclusively in Green decks featuring tons of shuffling effects. These decks are populated top to bottom with Farseek, Kodama's Reach, Sakura-Tribe Elder, Sylvan Scrying, and Wood Elves. Sensei's Divining Top may not have a Green border or a little Forest icon in the top-right corner, but believe you me, the Top of the hop has an "Honorary Green Card" membership... um... card in its pocket. So what about Meloku?

The greatest trick the Devil ever pulled, it is sometimes repeated, was to convince the world that he doesn't exist; with no keen eyed paladins hunting for fallen angels wielding pitchforks, that cloven-footed troublemaker is free to play puppeteer unencumbered. Similarly, Meloku masquerades, hiding in plain sight with his Blue border, convincing us all that Morphling-class five drop flyers don't flap above the average Forest. Sure, there have been one or two successful actual Blue decks that have returned a land or two to grip in exchange for a 1/1 Illusion token, but for every Clouded Mirror in a Ruel brother's Psychatog sideboard, how many came out a turn – or even two turns – early via the ubiquitous Sakura-Tribe Elder and his cronies Birds of Paradise or even the downside-deadening Sakura-Tribe Scout?

Are these the Green cards promised to you by your first dog-eared Core Set rulebook? Does Meloku the Clouded Mirror seem like a brother to the Green that gave us the inexorable Berserk, the potent rage of Wild Mongrel – called by most the best two-drop in the storied history of a game defined by offensive two-drops? Are Green mages meant to block and then shuffle, peek at the tops of their decks, shuffle again, and then maybe pick up a land or two prior to more blocking? What about Green's pairing with White? Should the descendents of Rogue Elephant, the heirs to the mantle of Rancor be relegated to tapping their foes before they can approach the field of battle? Isn't such a yellow-bellied, panty-waisted, approach to the pre-combat ritual disgustingly Blue – the hated Blue – Green's enemy from the earliest days of Alpha?

Personally, I fell in love with the wizened Sakura-Tribe Elder the first time I laid eyes on it at the Champions of Kamigawa Prerelease. The gentrification of Green as a, shall we say, more strategic cadre has allowed the color to force itself into contention with Blue as the best in the game over the past couple of years. Pat Chapin recently told me he thought that Life from the Loam – another splashy champion of the new Green – was close to Necropotence in power, even!

Believe it or not, some Green mages just don't agree with the direction the color has been going the past couple of years. To them, cards like Sakura-Tribe Elder, working hand-in-hand with Sensei's Divining Top to accelerate up to Meloku the Clouded Mirror, or engines where Life from the Loam pairs with Lonely Sandbar or Barren Moor to draw huge volumes of cards, are a betrayal of the color's core values. Green, they believe, is the color of the attack. Give me a huge creature at a discounted mana cost, they rage. Give me a weapon that can pierce the veil of slithering or flying 1/1 Ethereal Hazes. Show me any ally that can complement Green's fury!

To these players, the proper pairing for Green is not the elegant manipulator or evasive intellectual, but its polar opposite. Via the Gruul Clans, these Green players can trade in their surgical instruments for a quick drop blunt instrument: 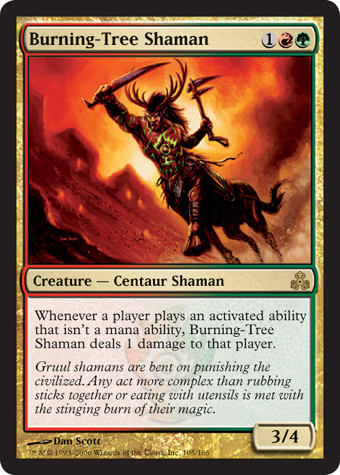 When I first looked at this card, I didn't know what to make of it. Why would I want to play this? My first impression was that Burning-Tree Shaman was kind of like a symmetrical Juzam Djinn... I would get an efficient 3/4 creature for three mana, but both of us would suffer the downside. Despite the dangerous legend commanded by the Juzam in elder days, a merely symmetrical substitution to its downside didn't seem good enough for me, not for a 3/4 for three, not when undercosted creatures like Watchwolf and Iwamori of the Open Fist are available in the same format.

The problem was, I was thinking like the wrong kind of Green mage. 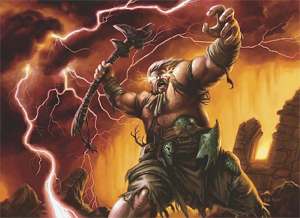 Burning-Tree Shaman hates the idea that Sensei's Divining Top, Meloku the Clouded Mirror, and – remembering the traditional (read: pre-Boros) enmity between White and Red – even Glare of Subdual are "Green" cards, let alone what most players think of when you ask them about Green cards. To the Burning-Tree Shaman, Green is the color of hitting people. The cards we've spent much of this article discussing – including to a lesser extent even Sakura-Tribe Elder itself – prevent the Gruul Clans from hitting people. The Burning-Tree Shaman is sick of being held off by blockers. He is sick of being tapped before he can attack. What is the point of being an aggressively-costed attack creature if I can't get into the Red Zone? It's time to make these cowards pay. In life points.

While Burning-Tree Shaman will still get tapped by Glare of Subdual, he will steal a point along the way. He will not usually trample over a (misguided) Sakura-Tribe Elder or Illusion token, but point by point, he will make his presence known, giving beatdown decks a better chance to compete in an increasingly attack-hostile Standard format. In the greater scope of the game, he will really soar.

With Burning-Tree Shaman in play, it will be almost impossible for a Gruul-aligned beatdown player to fall to a lethal Psychatog attack. Usually the beatdown deck is ahead – many times way ahead – and the Psychatog deck wins out of nowhere with a fortunate Fact or Fiction into an improbable Wonder. For every +1/+1 the Psychatog earns, for every activation by the best creature in the game, the Burning-Tree Shaman will match (immediately), point for point… Good luck getting to 20 alive. Will there be anything less scary for a deck that is sure to be packing burn than an opposing Cranial Plating sitting next to an opposing Blinkmoth Nexus?

A conflict or three with inevitable Extended teammate Wild Mongrel notwithstanding, the Burning-Tree Shaman knows where his bread is buttered. He doesn't fool with mana abilities...real mana abilities that is. He is more than willing to take advantage of Green's traditional lynchpin, the one mana accelerator. He wants to hit the board on turn two, when a 3/4 is most potent. But that almost-Blue Sakura-Tribe Elder? Maybe Burning-Tree Shaman will work with the best Green card in Standard... but even when they are playing on the same team, he isn't cutting his fellow Shaman any one damage breaks.