It Almost Speaks for Itself 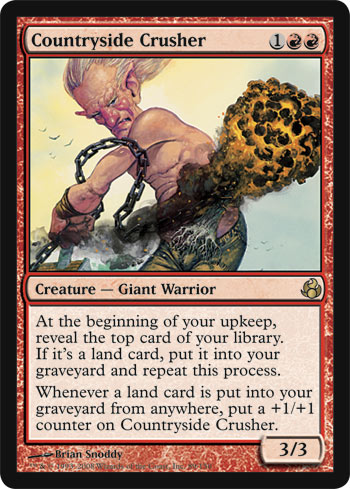 So awesome, it almost speaks for itself.

Countryside Crusher is a 3/3 Giant Warrior (they tell me these bits, especially the second one, matter nowadays) for three mana. Is it playable? I'll say! The 3/3 for three mana has been a staple of Block Constructed (for instance) for years, from Silt Crawler to Chimeric Idol (kind of)... and it wasn't that long ago that Block Constructed was defined by Takenuma Bleeders early and ultimately cracked by the humble Gnarled Mass (which, incidentally, was given the same Constructed rating as Umezawa's Jitte by far-seeing Hall of Famer Zvi Mowshowitz in his Kamigawa Constructed set reviews) late. The difference? Well, there are two...

First of all, Countryside Crusher is red. We expect green to get a 3/3 for three and be happy enough to play it in the right format; black might pay a little less for the body, but there will be a price; red, however, rarely gets these kinds of creatures. Sure, red has had some awesome ones over the years—format-defining utility in Goblin Welder or Flametongue Kavu, offensive headaches like Goblin Lackey or Blistering Firecat—but we don't often see a red card that "just" has solid, reasonable, stats, requiring a pretty basic amount of mana (and many of us start with three lands in play). Heck, to get a Grizzly Bears-class two drop, red usually has to settle for something suboptimal along the lines of Goblin Raider, and much of the color's career as an offensive tournament deck was made with Ironclaw Orcs doing most of the attacking for two.

... But the thing is, Countryside Crusher might have the solid stats, but it doesn't just have solid stats. Its text box is awfully important, especially the second part. Almost half the time that you play Countryside Crusher on the third turn, you will be swinging with a 4/4 (or bigger!) the next turn; if you run a Birds of Paradise on the first turn, you might just have a de facto Flesh Reaver, only with a significant upside instead of the painful drawback. Flip over just one land and you are basically in Hidden Horror range, only with, um, a significant upside rather than, um, a painful drawback.

More on the First Ability

Yes, the first ability will just keep rolling as long as you've got lands on top. If you don't want to draw any more lands, this will be doubly awesome for you... You'll sift right by any mana clumps and have a bigger and bigger offensive threat to boot.

This ability is a natural playmate to Sensei's Divining Top. Not only will your Top give you the ability to set up little tracts of countryside for your Giant Warrior to crush, but your Countryside Crusher can help to give your Divining Top fresh looks with greater consistency. And if you want to draw lands, the Top can flip one into your hand such that you can re-draw the Top.

More on the Second Ability

Countryside Crusher gets bonuses when lands hit the graveyard from anywhere. So obviously the top of your library will be the most common source of Crusher dinners, but lands can come from play (as with an Onslaught dual land) or hand (as with an Onslaught cycling land). With that we encounter what I like to call...

I haven't seen the entire set yet, but I am going to go out on a limb and guess that Countryside Crusher is the best "straightforward" creature in the set, and might even border on format-defining. Is it Tarmogoyf? Not quite. While Countryside Crusher isn't "just a guy with power and toughness" like the secondary market's favorite two-drop, he has some definite minus signs when they go head-to-head. The biggest one is that in certain formats—most notably Extended but to a lesser degree Legacy—Tarmogoyf has largely become an auto-include as, between Onslaught and Ravnica block dual lands, almost every deck can hit a single

with reasonable consistency... Countryside Crusher, despite having some nice base stats and a bigger upside, is somewhat prohibitive at

(twice as much color required for a splash). Many a black-blue deck, for example, will snap up Tarmogoyf in an instant, but at three mana, they would probably consider oldie-but-goodie Psychatog for the three-drop job before putting its mana through a strenuous double hoop. On balance, Tarmogoyf is going to hit its natural size limit fairly quickly whereas Countryside Crusher doesn't actually have one.

Countryside Crusher versus Terravore is probably the more natural comparison. They cost about the same amount of mana, but Countryside Crusher can hit play earlier, with less of a downside, and consistently perform more impressively than its Lhurgoyf cousin on its own. Both cards can exploit the gimmick plays (cycle land during combat, possibly flipping over Life from the Loam for even more damage), but to be fair, Terravore is probably the better pure gimmick creature because it doesn't actually have to be in play in order to get the lands-to-size bonuses (remember Terravore was actually played in Cephalid Breakfast-like reanimation decks as a finisher).

Not Obvious At All

A few years ago, I kind of tanked an undefeated Grand Prix Day One but still found myself playing for Top 16 in the last round of Swiss against the one and only Jon Finkel. If the right guys lost, the winner of our match might still make Top 8. On the draw, I glanced down at my hand and decided to keep six lands and Multani, Maro Sorcerer. Did I lose on this decision? It was kind of moot because Jon's first big play was Morphling and there was nothing I was going to be able to do about that with forty cards. What are you gonna do?

Most mulligan commentators will tell you to ship almost every-six card hand. However, if your one play is Countryside Crusher... I'm not so sure. If you absolutely need to draw lands, at least naturally, don't play down your Countryside Crusher unless you need a blocker or something. If you've got a Birds of Paradise, two-land, opener, second-turn Countryside Crusher could be a risky play (but potentially high reward, of course).

Remember: You're never going to topdeck a land again.

If there is a land on top, you're not drawing it. It's going to get Crushed. If there is a land under that... Crushed. Okay, peel your spell. Whew. Land next turn. Not so quick, buddy boy! Crushed. See how this works? If you've got Life from the Loam or Sensei's Divining Top, sure, you can finagle yourself into drawing (or at least having) more lands to drop (rather than having them dropped in the graveyard for you); a blue blend might allow you to draw extra cards in order to play lands... Just don't count on actually picking them up the old fashioned way. That will be pretty complicated.

On balance... You draw nothing but gold the rest of the game! Yahoo!

You know how you can find yourself in topdeck mode later in the game and you lose because you rip a land when your opponent goes runner Runner RUNNER? With Countryside Crusher in play, you're not likely to lose a battle of topdecks, especially when your threat creature is getting bigger every turn.

But watch out for this one. Drawing spells for the rest of the game is all well and good when you have sufficient mana, but you can actually lose on tempo when the opponent is playing cards like Remand if and when you suddenly stop playing lands. Remember that a good reactive deck will have cheaper defensive spells than you may have threats, and when you stop playing lands, you might not be able to do more than one significant thing per turn.

Many defining threats in recent times have warped card choices both for the threat decks and the environments around them; for example players ran Chromatic Star in Time Spiral Block Constructed for the potential bonus to Tarmogoyf, and players today are both wary of and ready to exploit planeswalkers and tribal cards for the same reason. Kami of Ancient Law has reemerged in Extended to stick a fork in Enduring Ideal even under a Dovescape lock. Personally, I love to create strategies that win even when everything goes right for the opponent. It will be interesting to see if Countryside Crusher becomes so popular, so well respected, that opponents will actually craft plans to lock the Crusher down going long. The goal would be to keep the normally devastating Giant in play... but to keep the opponent from doing anything worthwhile. Temporal Isolation into Wildfire perhaps? It's probably tough to beat a guy rolling sixes when stuck on one or two lands.

In sum, Countryside Crusher seems both powerful and elegant, wonderfully pregnant with possibility. It is the kind of card that you can build a deck around, and threatens to be popular enough that it will be the kind of card that some of your opponents—especially the most forward thinking and clever—may be building to beat over the long haul. And really... is there any higher compliment for a card or strategy?