It Can't Be Wrong If It Feels So Rite

delve into my personal archive of Magic humiliations and blunders. (Wow, this week is fun already!) Everyone has a story like this. Everyone has that awful, nightmarish trade they made when they didn't know any better. I'm not going to win any awards for mine, but let me tell ya—it's a real doozy.

I started playing Magic during Beta. Right from the start, I was a player, not a collector. I had a deck—one single green-black deck—that I maintained, updated, and morphed over time. I didn't buy many cards, and when I did, I was happy to trade away my useless red, white, and blue cards for green and black ones (or precious, precious artifacts) that might make it into my deck. But I didn't trade away everything. Even when I didn't know much about much, some cards were so ridiculous even I could recognize them. But my willpower for hoarding my off-color cards was weak, and the temptations of one certain card were too much to ignore. It was a mythical green creature that I had heard fables of long before ever seeing one. Its unbelievable ability was waiting for an enterprising Timmy/Johnny (as I was at the time) to come along and use it… exploit it… break it! We were soulmates, and I had to get my hands on it. That is why, after months of refusing the incessant trade requests from my dormmates, I finally caved in and traded away my Beta Time Walk for… an Unlimited Fungusaur.

Then, a week later, I saw the spoiler for Revised and found out that Time Walk was taken out of print.

On second thought, maybe I will win an award for that. Hey, I knew Time Walk was nuts—I could sense it—but I never, ever played with it. It was useless to me. Unfortunately, once I started playing with Fungusaur, I realized it was useless to me as well. Four mana was too much to pay for the creature, and I could never grow it to the gigantic dimensions its ability teased at. It was quickly cut from my deck.

Why is this story relevant to a Fifth Dawn preview? Well, I loved Fungusaur's ability and imagined getting great things out of it, but the body it was stuck on (

for an otherwise vanilla 2/2) was unwieldy. But what if all your creatures were Fungusaurs? 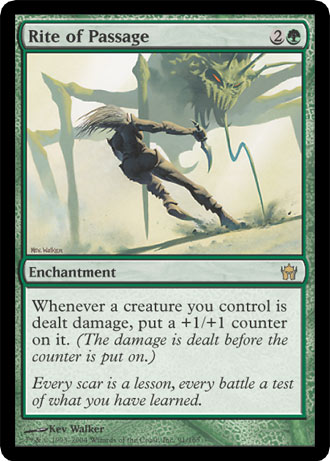 The monks' monkey is at it again. This thing makes me giddy. It's like a combo piñata: I whack it with a stick and goodies pop out. I've been at it for two hours and the floor is covered with combo treats. There are two main categories: Creatures that want to feel the pain, and interesting ways to bring the pain… gently.

The first thing that occurred to me was, of course, Triskelion. When I see the word “damage” and the words “+1/+1 counter,” Trike dances in front of my eyes. Triskelion plus Rite of Passage don't do much by themselves; you merely spin your wheels as the Triskelion pings itself to death. Thola riskelion plus two Rites of Passage wins you the game. (This enchantment is drooltacular in multiples.) Trike removes a counter to ping itself and gets two counters in return. Do that 1,000,000 times and you'll have a 1,000,004/1,000,004 creature with 1,000,000 damage on it. You can't knock your opponent out right away, but after damage clears and a new turn starts, I'd say you're in pretty good shape.

Those are pretty obvious so far. The thing that really started to warm my heart to this card is that it makes great combos with unheralded, out-of-the-way cards. How often is Spikeshot Goblin overshadowed by Reckless Embermage?! While undergoing the Rite of Passage, this normally unspectacular creature has the spectacular ability of “

: Deal 1 damage to target creature or player and put a +1/+1 counter on Reckless Embermage.” You can use it as a growth ray on your other creatures, or you can clear your opponent's side of the board while turning the Embermage into a behemoth. Sign me up!

to add +1/+1 counters to all your nonflying creatures while destroying your opponent's weenies and damaging his larger creatures? I would, and suddenly Tremor is extraordinary. But wait—Slice and Dice, the uncounterable cantrip version that doubles as a moderate board sweeper, may be better here. And Volcanic Spray, a

Tremor with flashback for more counter-adding fun, may be better still.

I thought that growing the Birds and the Bladewarden would be tricky since they each start at 1 toughness (and note that Volcanic Spray will miss the Birds). You need to pump them up before hurting them. Luckily, there are lots of ways to do it: Mirari's Wake, Power Conduit, or Forgotten Ancient can all boost their bottom line. Test of Faith can turn damage into counters in lieu of Rite of Passage. Of course, the easiest answer of all was staring me in the face: You can use the Bladewarden on itself!

Please Sir, May I Have Another?

The well of Rite of Passage combos isn't nearly dry yet. I was thrilled when I discovered the Caltrops interaction. It becomes a makeshift Fangren Firstborn since each of your creatures gets a +1/+1 counter when it attacks (in exchange for a wee bit of damage)—and it plays some pretty harsh defense too.

Traveling down this path led me into black. I thought Volcanic Spray was efficient, but it's got nothing on Pestilence. Reckless Embermage can't hold a candle to Thrashing Wumpus. Funnel as much black mana as you want through them: Your creatures just keep getting bigger while your opponent's creatures (and your opponent) die off. The damage you inflict on yourself is a small price to pay. Not enough? Plague Spitter is more than happy to join the party. The pain is delicious.

Need more creatures that can benefit from this kind of attention? I already included Spikeshot Goblin and Auriok Bladewarden, so Viridian Joiner is feeling left out. Other 2-toughness mana creatures fit right in: When you don't need them for mana any more, they'll be big enough to wreak some havoc on the battlefield. The deck can't include any 1-toughness creatures, though, unless it makes room for Spidersilk Armor or the like.

What other critters are cuckoo for cocoa +1/+1 counters? Spikes! Spike Weaver and Spike Feeder are obscene in this scene. Hurt them to give them counters, then use those counters for unending Fogs or life. Imagine this board: Rite of Passage, Thrashing Wumpus, Spike Feeder, and mana. Sends chills down my spine.

There are still more creatures that would love to prove themselves in a Rite of Passage. Various Hydras. A certain Fifth Dawn Oracle that may or may not be Etched. Karplusan Yeti and its kin, Tracker. Magmasaur. Butcher Orgg (letting you use its ability to good effect on defense). Last but not least is the obvious choice (so obvious I had to corral one into the green-black deck above): Fungusaur itself. Preferably a Revised one.

Until next week, have fun at the Fifth Dawn prerelease!
Mark