It Speaks for Itself

preview article is a little short, but I believe that in this case less is more. The card speaks (and howls) for itself. There's a saying that good men are hard to find. That's been true in the past, but it is not true now. We've come a long way from when pros like Bob Maher and Steve OMS complained that all creatures did was die. Creatures are stronger and more central to the game while the removal has been scaled back to allow them to shine. Two drops that are 2/2 with highly useful abilities have been elevated from an ability reserved for white mages to par for the course in the world of Ravnica. Good men are remarkably easy to find. That raises the bar on what it takes to be a good man. To keep its edge, white and its partner green needed to go the extra mile. If it had become standard to get a 2/2, then there was only one thing to do. What is it? Click here to see. 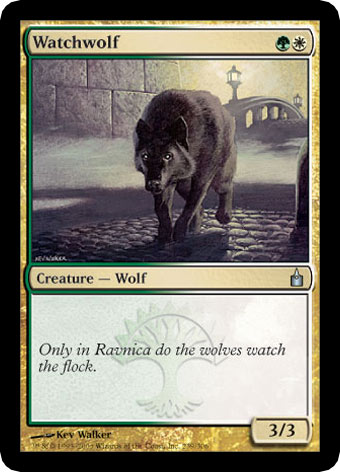 Watchwolf has no drawbacks. It isn't even a legend. It is just a creature bigger than it has any right to be. When Watchwolf hits the table opposite you on turn two, it feels a lot like it does when Isamaru hits the table on turn one. Your life just got harder, and there's nothing you can do but deal with it. They have a three drop out on the second turn without any need for acceleration from Birds or Elves. That is one reason that Watchwolf doesn't feel as unfair as it could: With the power of Birds and Elves, it's not unexpected that a green deck would get a 3/3 into play on turn two. If we weren't used to that, I might be off on a Flores-style tour of previous two drops right now. The closest parallel to Watchwolf is either Albino Troll or Rogue Elephant, and both of those took a heavy toll on your mana development. 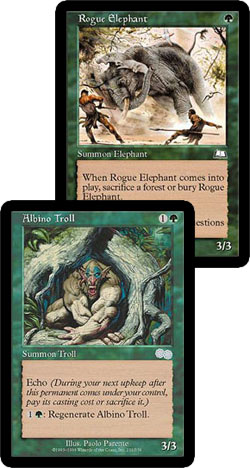 In a primarily green deck, Watchwolf is underpriced but the result is more or less fair. That's where Ravnica's lands come in. With access to them and to painlands, you don't have to be all that green to play Watchwolf and get him out on turn two reliably. You can splash it into an otherwise white deck, whether it has an additional color or not, confident that the mana in the format will back you up. In the past, splashing a two drop would have been madness. Now the idea comes naturally. While your opponents are playing a bunch of strange lands and otherwise twiddling their thumbs getting ready to do something relevant, you're preparing to do serious damage to them while you go cause even more trouble, and you've done it without having to put multiple creatures on the table.

Alternatively, you don't even have to be attacking. This is a wonderful way to buy time. If your opponent had a fair two drop on turn two, he won't be able to attack with anything productively until at least his fourth turn. Often it will take longer, as many strong creature decks focus on 2/2 creatures. If you're not up against a creature deck, Watchwolf stops defending and becomes a serious threat even without any backup.

That raises the possibility of using Watchwolf as part of a transformation sideboard. If you're going first and your opponent has sideboarded out his creature removal, Watchwolf will often come down before they can counter and has a good chance to go the distance. If they stop it, you have lost little. In older formats you can continue this offensive on the next turn with Anurid Brushhopper or Exalted Angel, both proven to be very effective at this task. Watchwolf is good enough to become the clear choice for creature decks in older formats if they have access to the mana they'll need to play him reliably.

In fact, Watchwolf is so good that leaving Watchwolf out of a deck playing both white and green requires a strong reason. Its biggest weakness other than the color requirements, if you can call it a weakness, is that it does not contribute to the more complex synergies that the guilds can build up in the world of Ravnica. It spends all of its mana cost on that which matters most, power and toughness. There will be some decks that are so focused that they won't want Watchwolf because they build on themselves and every card reinforces their theme. They'd rather have two creatures that work together than have Watchwolf and a creature that doesn't have the right friends, and they don't want to overcommit to the board. When your best excuse for not running a card is that your deck is doing something completely different, you know you have a pretty good card. And if your creatures are so strong together that you'll play them over Watchwolf, there's a good chance you have a rather fine deck as well. Chances are that even then you're just being silly by not running a creature this efficient.

How much colored mana do you need for Watchwolf? The standard answer is 'as much as possible' and it is understood that gold cards come with risks. Running your second color off of eight dual lands is not going to be enough, but you don't have to go that much farther than that before this rounds the corner and becomes worthwhile. You're better off getting a 3/3 with less than perfect reliability than settling for an old-fashioned 2/2. Also note that you shouldn't worry about Birds and Elves making you not want a two drop, as there are any number of ways that you'll end up with two mana free. When I ran a Fires of Yavimaya deck I didn't run River Boa or any other two drop but several things had to go right to make that happen. I needed to have Rishadan Port as an alternate pseudo two drop, and I needed to have a deck with so much mana that I considered the Boa to be underpowered. No one is going to call Watchwolf underpowered. If you must, I strongly suggest you don't do it to his face. He's watching.

The bottom line is that if you run enough white sources and enough green sources, you're either completely creatureless or you're almost certainly running Watchwolf. If you don't have enough sources, then you probably run it anyway. There's nothing wrong with a 3/3 on the fifth or sixth turn when it comes this cheap, so you can risk having to play something else on the second turn. You'd like to never have mana problems, but Watchwolf lets you take that risk. Other cards might be flashier to the untrained eye, but never underestimate the value of a good man.