ne of my favorite pieces of art in Modern Masters is the art for the new Ivory Giant. Let's take a look at the art and the art description which got us here.

Color: White creature
Location: A snow-covered valley at night under a cloudless, starry sky.
Action: Show a pale-skinned giant on a rocky outcropping above a snow-covered valley. The giant is lean, muscular, and at least 9 feet tall. He is shown walking through a magical blue-green barrier of 'time energy' (see reference: this mechanic is represented as an almost electrified 'sheet' of time-jelly that the creature has to push through physically). Icy wind and thick snow are blasting from his hands (most of him has already emerged from the barrier). Maybe we glimpse a village below, directly in the line of fire of the giant’s magical snowstorm.
Focus: The giant
Mood: They had no idea a storm was coming . . .
Notes: The giant should look deadly and intelligent, not dumb or oaf-like. He is a powerful Titan, physically impressive and capable of wielding magic. 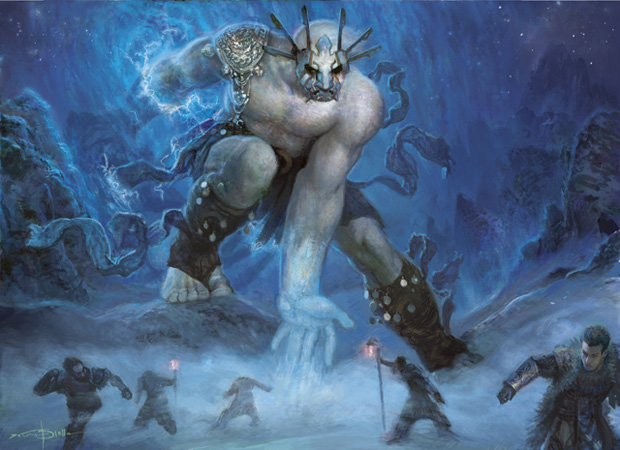