t is hard to believe there is only a week left of Ravnica-Ravnica-Ravnica limited events. The guild ranks are going to swell to seven when the doors swing wide for Guildpact prerelease events all around the globe. Fans of black-white will be clamoring to get their Death Grasp on the Orzhov guild cards while red-green aficionados are sure to go Kird Ape over the Gruul Clan.

Personally I am looking forward to the Izzet cards most of all. I have always been a blue-red mage at heart. My first (somewhat) legitimate constructed deck featured both Lightning Bolt and Counterspell, I had a playset of Frenetic Efreets at the Mirage Prerelease, and every Extended season I trot out Wild Research and give it a whirl in the playtesting blender.

Back when I built that very first deck I had only basic lands and City of Brass to work with. Volcanic Island had been relegated to what was then known as Type 1 and the Shivan Reef was still uncharted. My four Reefs are sitting at the ready for the four rare guild lands that no doubt await us in this new set. But I am getting ahead of myself. The next Constructed events are still months away and while there have been a couple of Limited PTQ weekends this month they really begin in earnest after the Guildpact Prerelease.

Many of you have already read my past articles urging players to try their hands at a Prerelease tournament. For those of you who do not need either convincing or a primer on what to expect at a sanctioned Magic tournament I will let you see your preview card and get along with your day. As always in my Primers, the card is a staple common that you can expect to see in many of the decks at the event. 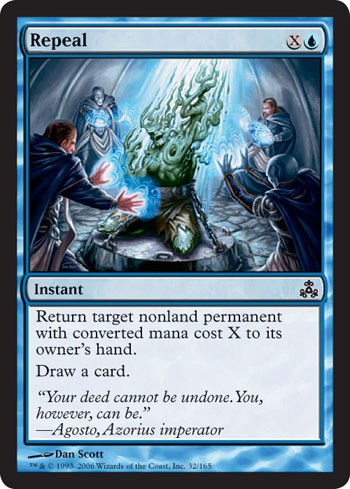 Bounce is always a solid addition to any deck and when you add "draw a card" to just about anything, you pay attention to it. Ravnica featured an array of Auras in each color and Repeal gives you an excellent weapon to foil your opponent's Flight of Fancy, Strands of Undeath, or anything new that might be lurking in Guildpact – provided you have the mana to cast it. In fact, you might just want to keep an eye on your opponent's available mana before you go casting your own Auras or using your removal this weekend lest they Repeal your target.

Before we get to the point where you are making strategic decisions based on your opponent's available mana we have to get you through the door and into an actual event. I don't know how many of you out there have not tried your hand at tournament Magic but if you have ever considered it a Prerelease is your ideal starting point. 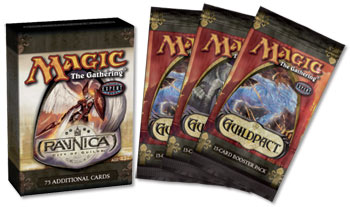 For one thing you get cards. Not just any cards either, brand-spanking-new ones. Guildpact is not on sale yet, so the only way you can get your mitts on it early is by playing in these tournaments. The most common tournament format over the weekend will be individual Sealed Deck tournaments using one Ravnica Tournament Pack and three Guildpact boosters. Players will build 40-card minimum decks and play for a fixed number of rounds based on attendance. At the end of the designated number of rounds everyone with one or fewer losses will win prizes – more Guildpact boosters.

There will also be Two-Headed Giant tournaments (the same format as the upcoming Champs tournaments that were announced in my column last week), which allow you to play with a friend. The round structure and prizes are similar to the individual events but in this case you get to play with a friend. Each pair of heads gets a Ravnica Starter Pack and four Guildpact boosters to work with for 2HG. This is a great format if you are attending your first tournament with a more experienced friend. Both players work as a unit but designate one head the dominant role at the outset. Ultimately that player can help make decisions for the less experienced player and show him or her the ropes of tournament play.

In addition to the new cards from the boosters and (hopefully) prizes you may win, everyone who signs up gets a special commemorative foil rare featuring alternate art. Prerelease events are the only place these are available and only while supplies last. Some of the cooler promos from the past have included Lightning Dragon and Ink-Eyes, Servant of the Oni. This year's prerelease card is Djinn Illuminatus: 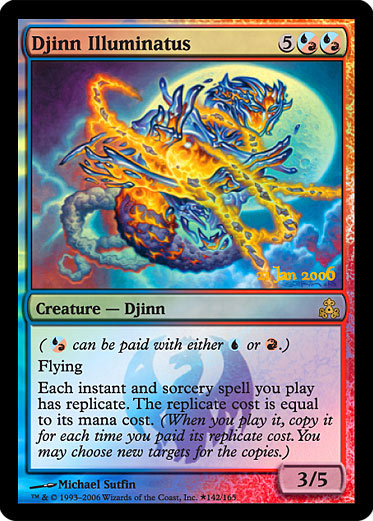 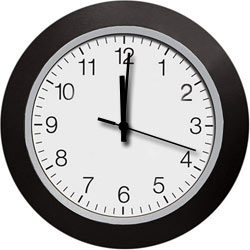 So what do you need to do to get your hands on some new cards, the prerelease foil, and maybe even some prizes? First you need to click this link and find a Prerelease event near you and find out what time they start. Prereleases are traditionally held on Saturdays but some organizers start their Saturdays a little earlier than others. You can find Midnight Madness events in some areas that take place as soon as the clock chimes midnight on Friday. There are also Sunday events in many areas. Check your local listings to find the tournament that best suits your schedule.

Once you have decided to go make sure you allow enough time to get there and have detailed directions. Most organizers run many small events (known as flights) throughout the day so you don't need to worry about getting there first thing in the morning but the earlier you get there the more chances you will have to play. You should also make sure you have all the supplies you need for the day.

Players are responsible for having some way of tracking their life during a sanctioned Magic tournament. The best method for doing this is to make sure you bring a pen – there is almost assuredly scrap paper available at the tournament site if not actual scorepads. If you have never played in a sanctioned tournament before it is highly unlikely that you will have a DCI number – if you do, you should make sure you know your number.

If you do not have a DCI number don't fret. In order to track player's performances in their tournaments Wizards of the Coast has a governing body for the game called the DCI. In order to play in a sanctioned event a player must have a DCI number, which is simply a PIN that is associated with each player. DCI numbers are free and are available upon signing up for the tournament. Once you have your number you can track how well you do in sanctioned tournaments and become eligible for a host of perks ranging from free swag to rating based invitations to National Championships and Pro Tour events.

If you are playing in your first tournament it never hurts to introduce yourself to the local tournament organizer (tell them I sent you!) who should be very happy to meet a new customer and see you through the process of signing up. In addition to filling out a form for the DCI membership you may be asked to fill out another form by the organizer that will ask you for your name, DCI number, and some information for their mailing list. This is a great way to find out about tournaments in your area.

After you fill out your paperwork and hand over your tournament entry fee you should not be alarmed if you are not handed any cards save for your promotional foil. You will likely be told to wait for seating to posted and once everyone is seated for a tournament then product is handed out. Every organizer does things a little differently so make sure you pay attention to whatever instructions you receive when you sign up.

Once you are seated and the cards are given out you will be asked to build a 40-card minimum deck using only the cards you were given (you may not use your promo foil) and as many extra basic lands as you want. Some quick deckbuilding guidelines: 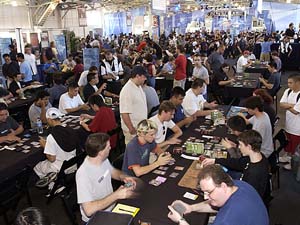 One of the great things about going to a Prerelease is that you get to meet other people who share the same hobby as you. Not only is it a great opportunity to make new friends but you can also benefit from the experience of players who have been around the tournament block a time or two. Prerelease tournaments are not as competitive as other tournaments and you will find that your more experienced opponents will usually take some time to point out your rookie mistakes and help you tune up your deck as you go along.

They will also be more than willing to trade with you. Just remember that you cannot trade cards in your deck until after you have completed or dropped from the tournament. You should definitely think about bringing a trade binder as these events make for some of the best trading of the year. Tournament organizers usually sell cards themselves or rent space out to dealers to sell cards. While they encourage trading they generally do not allow players to sell cards to anyone but an authorized dealer at the show.

I will be at the New York City prerelease on Saturday morning more than willing to trade for any blue-red rare lands you might happen to end up with!