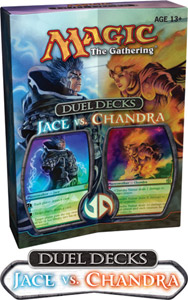 The air vibrates bluish around one. The other's hair flares and ignites. Suddenly, energies collide and catastrophes scar the landscape.

Wait—they're no mere humans, are they?

While I was a Wizards of the Coast design intern during the first half of 2007, the development of Duel Decks: Elves vs. Goblins by Devin Low and Noah Weil happened right beside me. Lots of real and fake Elf and Goblin cards could be found strewn across the marble-lacquered, depleted-uranium tables that the collective hive mind of Magic R&D uses to test Magic cards that are far too dangerous for the civilian public.

Fast-forward to nearly a year later, and I'm sitting in my own float pod amidst a galactic senate full of ambassadors from across the Magic spectrum (still) far more important and influential than myself.

The givens of codename "Duel Decks 2: The Sequel" were many:

For your own good, I'm going to skip this part. The only thing that matters is that we eventually chose Jace vs. Chandra for the product name and theme. The two premium foil cards would be Jace Beleren and Chandra Nalaar. 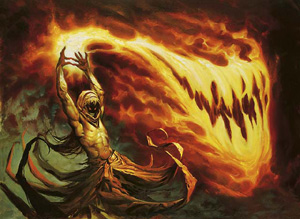 Working directly with the creative team on projects is a social experiment on its own. Planeswalkers are our central, recurring storyline characters, traveling to different planes (a storytelling vehicle not too unlike Star Trek). Magic cards appearing in a random distribution, having no guarantee of how few or many a customer with encounter, and having a single frame of illustration with tiny, uniformly typeset flavorfully equates to quite an ineffective storytelling device.

The download from Creative specified and extremely easy deck theme for Chandra: Fire. Anything and everything Fire-themed would work, and coming from someone who has researched every red card in Magic with a fire in it, there are a lot—so many, in fact, that Creative Director Brady Dommermuth postulates that his final minutes working at Wizards of the Coast will be spent staring at a Multiverse record labeled "Yet Another Red Burn Spell" just before he snaps, driven insane by having to concept one too many spells that burn something.

Jace was a different story. While I'm sure an "ice" theme has leapt into your mind, Jace Beleren is more adept with illusion and mental magic. This was not a happy thing for me as the designer to hear from Creative, but considering the Chandra deck theme was going to be a complete cakewalk, I decided to count my blessings.

There were considerable deck-building constraints for Jace vs. Chandra, including:

That last one really goosed my gander. It's a carry-over criterion from Elves vs. Goblins that I frankly don't see any upside in. I've played more than my fair share of casual Magic games (it's a valuable viewpoint I contribute to the collective Magic R&D hive mind), and not once can I recall an Extended-legality check from our games. The unwritten rules from my casual groups were:

Based on this, I appealed the legality requirement. The verdict came down from the heavens in favor, and that's why Jace vs. Chandra isn't Extended-legal.

The alternate arts were tackled early due to art commissioning requirements. As for the exact cards, we tried to leave ourselves leeway. The team settled on Incinerate and Seal of Fire for Chandra, locking in Seal of Fire because the art would depict an actual "seal" like its previous artworks. Jace was a left a bit more open-ended, with "a card drawing spell" and "a counterspell" locked in.

I began playtesting with prototype Jace vs. Chandra decks. The panging thought in my brain was always, "If I were Jace Beleren and I knew Chandra Nalaar was trying to kill me, what creatures would I summon? What spells would I cast?"

Jace would summon and cast:

Magic is filled with these kinds of cards, and "metagaming" is the natural inclination for anyone who knows what their opponent will bring to the table. See Jace vs. Chandra developer Erik "Evil" Lauer's article The Role of Hate, which discusses color hosers in detail. Note that we would never put Chill or Boil into these decks, as those two cards are far more powerful in this matchup than Jace or Chandra could ever hope to be, even more powerful than every other card in the game. In fact, the only usable hosers I found were Ether Well and Parch.

However, playtesting revealed that even Guma and Narwhal were invincible, unstoppable clocks that would require Bottle Gnomes or Moonglove Extracts in both decks as answers.

The intermediate decklists for Jace vs. Chandra are almost unrecognizable. Here's a few of the more whimsical cards that were cut in playtesting:

I found these cards fantastically fun, but they were ultimately purged during "The Great Powering Up" of both the Jace deck and the Chandra deck. (What can I do, The Pit is full of spikes!) Jace received a smattering of morph creatures like Wall of Deceit to convey his illusion magic and a complement in secret red hoser Spire Golem. Chandra's got a raw power-level upgrade with Flametongue Kavu as well as her own sideways blue hoser in Flamekin Brawler. All in all, Erik Lauer did an exceptional job developing the back-and-forth game play of these decks even at their increased power level.

The Chandra deck ultimately crossed the finish line as "the attack deck."

: This creature gets +1/+0 until end of turn."), making each of them individually dangerous. Coupled with a high curve, Chandra is more than capable of utilizing six or more Mountains of mana each turn for good effect. Chandra also has the largest blowout potential with Hostility into Fireblast, creating 18 power of haste combat damage out of nowhere. Her Keldon Megaliths is an intentional unsolvable threat. Chandra Nalaar herself is a very dangerous board controller that will quickly take over the game (my personal favorite planeswalker design).

By contrast, the Jace deck ended up being "the defense deck."

Jace's creatures are the better defenders by miles. Jace's game play against Chandra largely consists of fortifying a stable defense then electing a solitary flyer or Guile to play offense before a stray Fireball or Cone of Flame fries your best-laid plans. Card drawing is in your favor but you are burdened with the necessity of finding suitable answers for Chandra's questions, or else a seemingly innocuous Flamekin Brawler will melt your life total. Jace Beleren himself is about as meek as he could be against Chandra's burn suite, but I've used his +2 ability first to good effect to pull him out of burn range.

Here we see Jace Beleren the planeswalker, uncowled and illusion-ready: 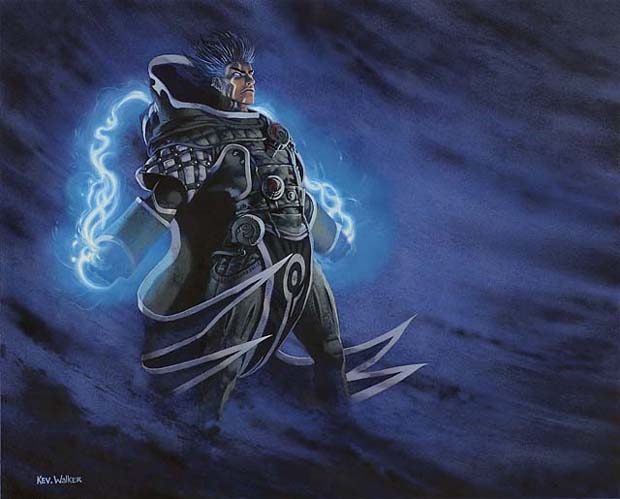 Next is Chandra Nalaar with her signature fire-imbued gauntlets, goggles, and crimson locks: 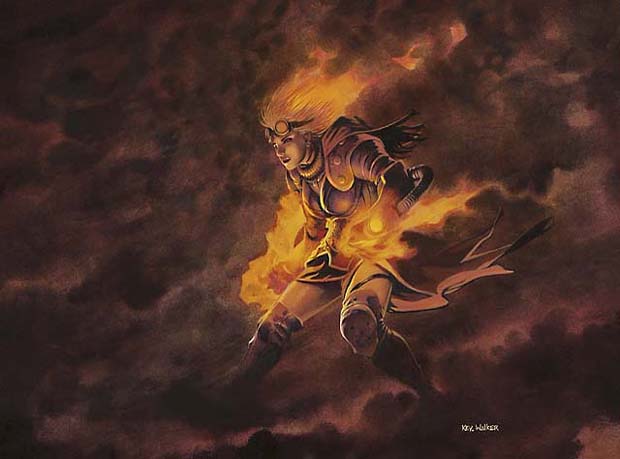 The final resting place for the "Jace drawing cards" alternate art was Fact or Fiction: 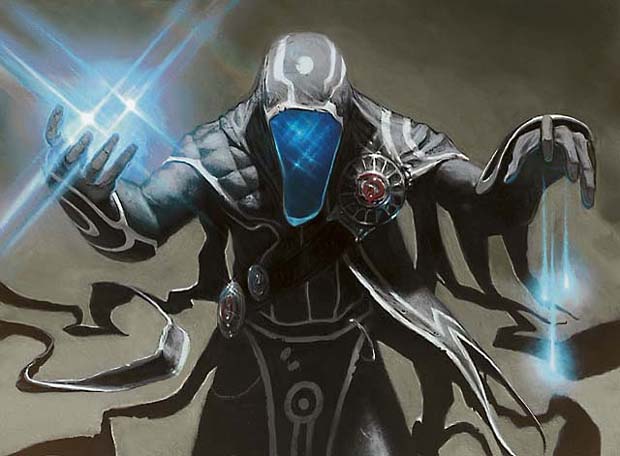 As promised, here was see Chandra laying down a Seal of Fire for Jace to walk into: 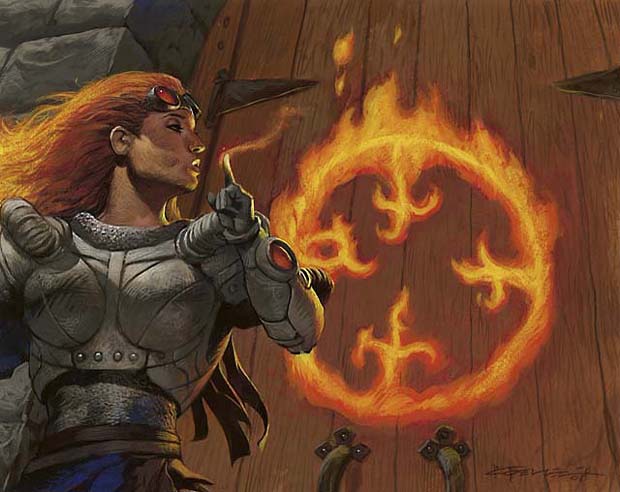 And finally here they are fighting with Incinerate and Counterspell, respectively, in a semi-connected panoramic action shot. You actually get two of each of these in Jace vs. Chandra (a blessing from Erik Lauer).

And that's how Duel Decks: Jace vs. Chandra came into being. If you weren't a fan of Jace or Chandra before, I can only hope that my reminiscing and primitive salesmanship skills have at least given you second thoughts. As a "bling bling matters" player, I've already put these promotional alternate art cards into my Elder Dragon Highlander decks.

Not to give anything away, but Jace vs. Chandra is evidence that we could do more planeswalker-themed Duel Decks in the future. Maybe someday Chandra will fight an ice-themed planeswalker, and my ultimate wish will come true: a Fire in Chandra's deck and an Ice in the other. 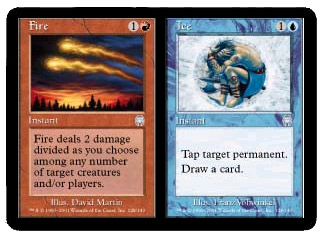