Kamigawa is a world familiar to many players. It is the birthplace of several beloved creature types, and its legends shape battlefields to this day. But the time of The Kami War is long past, and a bright, bold future is here. Kamigawa: Neon Dynasty presents a dynamic vision for a world of warriors and spirits, of poetry and blades. Let's look at the new abilities and game mechanics that await.

Stand on any street corner in Towashi and look around. You might suspect this place has amazing gear. You're not wrong. Reconfigure is a new ability found on Equipment cards. Well, artifact creature Equipment cards. Check out Simian Sling. 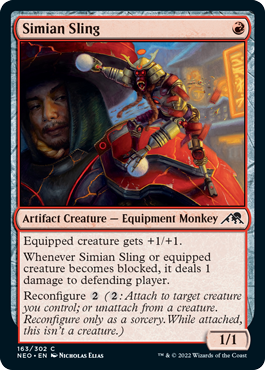 But wait! There's more! Reconfigure's other activated ability allows you to unattach the Equipment, causing it to resume being an artifact creature. This second ability has the same cost and can also be activated only as a sorcery.

The ability to unattach Equipment may seem simple, but the tactical flexibility it provides can change games. Remember that tapping a creature (say, to attack with it) doesn't cause any Equipment attached to it to become tapped. This means unattaching an Equipment after combat will result in an untapped artifact creature, ready to block (provided the Equipment was untapped to begin with).

As always, be careful about unattaching or moving Equipment after combat. If that Equipment gave a toughness bonus to a creature that had damage dealt to it, that damage may become lethal. You probably don't want your creatures to unexpectedly drop dead.

You'd think taking steps to improve your creatures would be its own rewarded, but several cards in Kamigawa: Neon Dynasty take it a step further. These cards refer to modified creatures you control. This means any creature you control that's equipped, enchanted by an Aura you control, or that has a counter on it. To demonstrate, I give you Akki Ember-Keeper. 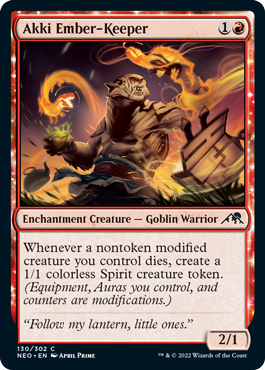 Not every card interacts with modified creatures you control in exactly the same way. While Akki Ember-Keeper cares whenever one dies, others may count them or want them to live, be free, attack your opponents, that kind of thing.

To dig into some of the finer points, Auras controlled by other players don't cause creatures you control to become modified. So, you can cast Auras like Pacifism without concern of accidentally making your opponent's creatures better. For counters, it doesn't matter how the counter got onto the creature, nor does it matter what kind of counter it is. +1/+1 counters modify just as effectively as -1/-1 counters.

Stories of the past permeate Kamigawa's landscape. They can be found in every riverside shrine and in every towering, neon-accented edifice. Some of Kamigawa's most well-known stories have found their way onto Saga cards.

The Sagas in this set are all transforming double-faced cards, but they don't transform while on the battlefield. Rather, each has a third chapter ability that exiles it and returns it to the battlefield transformed under your control. On the back face is an enchantment creature that may be familiar to some of you. Each is based on a popular legend from Kamigawa's past. 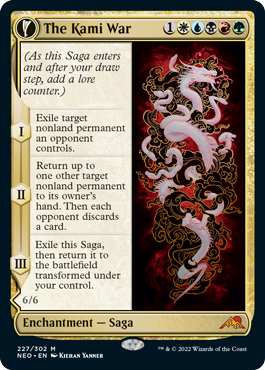 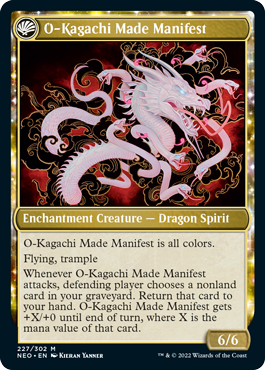 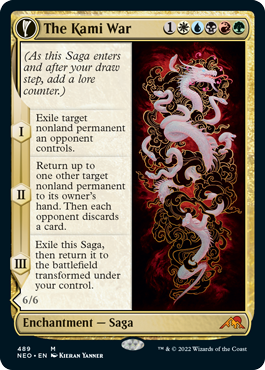 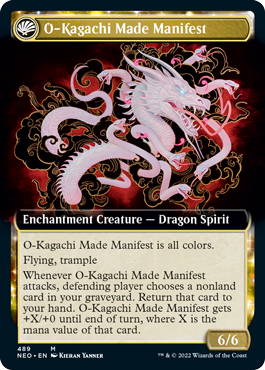 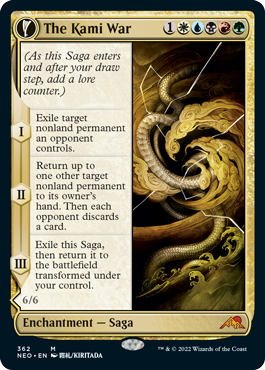 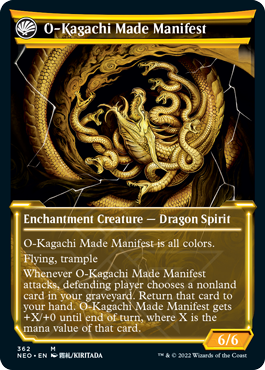 The Sagas also feature two new icons. The Living Historians is a group of storytellers on Kamigawa that pass on tradition through performance and music. You'll see several of them in the set, often using fans in their routines, so we felt that was a beautiful choice to represent the telling of these stories. On each front face, you'll see a closed fan. On the back face, the fan has opened, representing the conclusion of the tale, and if things are going well, the conclusion of your opponent's tale as well.

Ninjutsu, introduced during the original Kamigawa trilogy, brings an element of the unknown to combat. Every unblocked creature may be a Ninja in disguise! Ninjutsu is an activated ability on rarely seen creatures like Dokuchi Shadow-Walker. 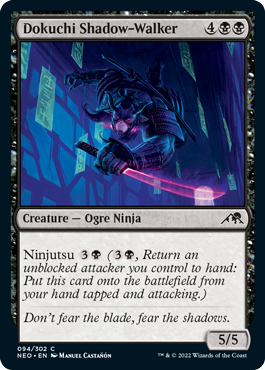 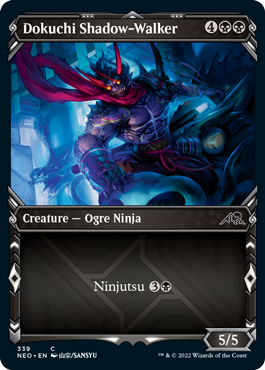 The Ninja will enter the battlefield tapped and attacking the same player or planeswalker the returned creature was attacking. Blockers have already been declared this combat, so the Ninja should have a clear path to deal combat damage. Technically, you can activate ninjutsu during the combat phase after combat damage has been dealt. This won't normally come up, but if your attacking creature has first strike, there are some tricks to be had.

Our next returning mechanic is channel. Channel abilities appear on a variety of permanent cards in this set. Permanents are great, but sometimes you need a more immediate impact. Each channel ability allows you to discard the card with the ability from your hand for an effect. The details vary, but here's one card with a channel ability, Greater Tanuki. 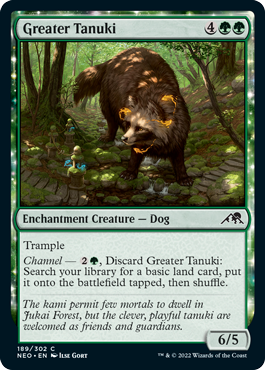 Giant 6/5 trampling Dogs are great in the late game, but if you're stuck at three lands, drawing them can be a little frustrating. Greater Tanuki can help you expand your mana capabilities in the middle turns, and if it shows up later, it's ready to help you bring matters to a close.

Welcome Back to the Future

Memory and imagination collide in Kamigawa: Neon Dynasty, and there's much more to this set than what you see here. Clever callbacks, innovative designs, and plenty of powerful characters are waiting to be discovered. Have fun!