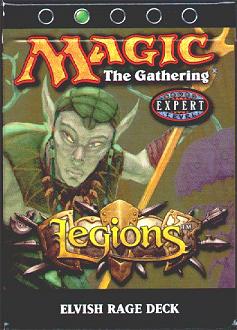 o spells? No problem! Smash your opponent senseless with your overwhelming horde of Elves. Every card in the "Elvish Rage" deck is either a forest or an Elf, so you'll be putting Elves into play quickly and attacking relentlessly until your opponent is history.

The order in which you play your Elves is important for inflicting maximum carnage. You should play Birchlore Rangers, Elvish Pioneer, and Wirewood Channeler at the first opportunity - the extra mana will help you put your entire army out much faster. Your next priority should be your large attackers, such as Stonewood Invoker and Elvish Warrior, so you can start beating up your opponent. Wirewood Hivemaster is also an excellent early play, because it will add Insect tokens to your attacking force. Taunting Elf delivers a knockout blow by letting all your other creatures get by unblocked.

A few of your Elves - such as Timberwatch Elf and Tribal Forcemage - will pump up your army and dramatically increase the damage your attackers deal. For maximum effect, use their abilities after your opponent decides how to block your deceptively small Elves. Carefully budget the abilities that strengthen your creatures. Make sure to hold them in reserve so you can pump up your Elves to negate damage-dealing spells or punch through early blockers. If you want to boost your Elves even more, consider swapping in some cards like Giant Growth or Elvish Champion from the Seventh Edition™ set.

"Elvish Rage" has two weaknesses: large defenders that hit the table early (such as Walls) and spells that get rid of more than one creature at a time. If you slap down a lot of your Elves fast, a single Earthquake or Wrath of God from Seventh Edition can really ruin your day. Play only as many Elves as you need to win. You'll have to decide how many you'll need to commit and how many you should hold back.

Be sure to attack aggressively the moment your creatures hit the table. After all, this deck was named "Elvish Rage," not "Elvish Apathy!" With so many angry Elves at your beck and call, your opponent will soon fold. Get out there and fight for the forest! 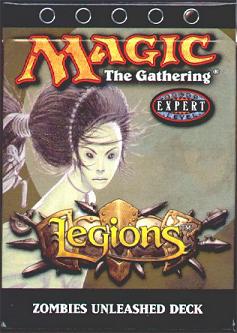 he "Zombies Unleashed" deck draws on the power of the grave to send your opponents to theirs. Every card in this deck is a Zombie, a card that helps Zombies, or a card that needs Zombies to function. Together they create a lethal synergy.

"Zombies Unleashed" has different yet equally effective strategies for the early and late stages of a game. Early on, cheap creatures like Festering Goblin and Withered Wretch will decrease your opponent's life total quickly and steadily. Later, once both players have built up defenses, Zombies like Skinthinner and Corpse Harvester step into the spotlight. They allow you to get more cards and take out your opponent's creatures, clearing the way for your larger army. Infernal Caretaker restocks your Zombies quickly, and Gempalm Polluter can deliver a knockout blow even through an army of blockers. Both Soulless One and Ghastly Remains can become huge attackers thanks to the massive number of Zombies in the deck. They can often take out your opponent in just a couple of attacks.

Even with a bunch of cheap Zombies, however, you might still have some problems in the early game because most of the deck's creatures cost three or more mana. Play defensively until your big bruisers come up. Boneknitter is key on defense, as it can regenerate the vast majority of your creatures. Don't worry about losing some creatures - Infernal Caretaker and Cruel Revival will allow you to get them back again. Save your creature destruction for troublesome fliers you can't block.

When modifying this deck, try to find some other cards that interact well with Zombies to replace your more expensive ones. The Onslaught set includes many possibilities, such as Unholy Grotto, but you can also look to older sets for help. The Planeshifttm set's Lord of the Undead is an excellent Zombie helper, and Carrion Wurm from Tormenttm has a very low cost for its huge size. Another possibility is to just add more of the same. For example, if Festering Goblin is working really well for you, swap in a few more.

As you improve the deck, you'll improve the certainty of your victories. Soon the entire world will drown under the unstoppable tide of your undead minions. Long live the dead! 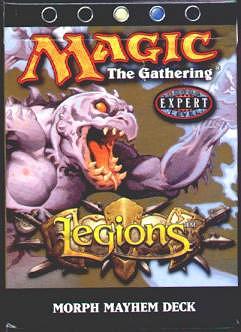 f you enjoy turning your opponent's brain into a puddle of goo, give the "Morph Mayhem" deck a try. Many morph creatures equals many options-options that no one else will know about until it's too late.

Your goal is simple: keep your opponent guessing. Always play your creatures with morph face down and attack aggressively. Wait until all blocking decisions have been made, and then decide whether or not to flip anything face up. Your success with this deck depends greatly on your bluffing skills, so show no fear during your attacks. Make your opponent afraid to block, and if he or she does, you can flip your morph creatures face up to use their special abilities.

Don't play any spells before your attack because you'll want to have mana available to power your morph abilities during combat. That way, you'll be able to do practically anything instants can do during combat, but with a good beefy creature attached. For example, Wingbeat Warrior's ability will help you win creature battles while Voidmage Apprentice and Willbender will keep bothersome spells away.

Of course, playing a deck that contains so many 2/2 creatures is tricky. One cheap 2/3 creature, like Elvish Warrior from the Onslaught set, can cause a fatal slowdown. And since many of your morph creatures have fairly high costs, you might get caught flat-footed by a single Harsh Mercy (Onslaught). To provide early support, cheap nonmorph creatures like Glory Seeker, along with cheap morph creatures like Whipcorder, are in the deck.

Some other interesting additions to this deck from the Onslaught set might include Dream Chisel, which will make your morph creatures cheaper, and Backslide, which can reset your tricks. Unlike tap abilities, morph abilities can be played the same turn a creature comes into play, so plan accordingly. Play your cards right, and your opponents won't know what hit them - literally! 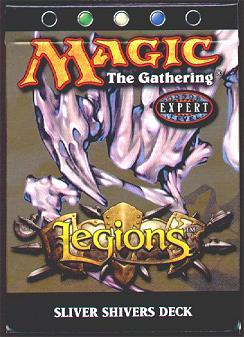 hey're back! It's been a few years, but Slivers make their long-awaited return in the Legions set, complete with some cool new abilities. The "Sliver Shivers" deck isn't the fastest deck on the planet, but what it lacks in speed it makes up for in strategy and great mid-game strength. Almost all of this deck's creatures can splice their abilities onto all your other creatures in play, and in some cases, even onto cards in your hand!

The key to winning with this deck is patience. Stall your opponent in the early game using your Plated Slivers and Pacifisms so you can survive to the mid-game, when you can drop a Shifting Sliver and outrace your foe to victory. Racing with either Essence Sliver or Brood Sliver is especially attractive, because you'll gain life or extra Slivers each time you attack.

Don't be afraid to hold back on playing Slivers during your main phase if you have Quick Sliver in play. You can always wait until your opponent's combat phase if you need a blocker, or until his or her end step if you don't. This deprives your opponent of some information during his or her turn, and can really swing a game if you play a few creatures he or she wasn't expecting.

It can be really tempting to play every Sliver you draw. Sometimes that's the right move, but always be mindful of mass-destruction spells like Wrath of God from the Seventh Edition set. As a general strategy, consider not playing a duplicate of a Sliver that you already have in play. That way you'll be less likely to overextend yourself.

This deck's main weakness is mana. It runs on three colors, and there aren't many ways available to change colors if you're missing one. You might try swapping out some of the basic lands in favor of pain lands, like the Seventh Editiontm card Brushland, or fetch lands, like the Onslaught card Flooded Strand. Rampant Growth and Birds of Paradise (Seventh Edition) are also options.

Customizing this deck is very easy because there are many other Slivers available to choose from. The Legions set also includes red and black Slivers, and for you nostalgic folks out there, head down to your local store and check out the Tempesttm and Strongholdtm sets for the originals. You need diversity to win, and Slivers have diversity to abundance.