Life in the Big City

I write these very words, Guildpact prereleases are being set up all around the globe. I am excited to get the set out there, as it was the first one on which I was the lone steward of card names and flavor text. But, lots and lots of hard work went into making Ravnica the whopper that it is, and I am not yet ready to fully turn the spotlight on Guildpact (we'll get that next week, when I force you to eat Gruul).

Let's step back a bit and take a last long look at Ravnica from a distance. What is it we see? Beasts? Vampires? Guilds? No. We see tall spires, smoke belching from industry stacks, cathedral steeples… all parts of the great urban hide that skins the plane of Ravnica. I am not saying we won't see some Guildpact stuff this week. I am just saying that we'll be leaving the Guildpact specifics for the upcoming weeks, while we pay some more attention to Ravnica the city, not the card set. As it is on most card art, the cityscape is also the backdrop to most Ravnica packaging. Packaging is the first opportunity to convey what a set “feels” like. This one feels like a city developing, building, piling on top of itself.

When the guild concept was first adopted for Ravnica block, a decision had to be made on where this sort of society would exist. The answer was plain and simple. The city. Then the city was hit with a Giant Growth and the result was Ravnica - the city that spans the entire plane. The Creative Team made a point of injecting city-world flavor into every facet of Magic that it affects; art, packaging, card concepts, card names, and flavor text. Conveying the feel of a compact urban environment was very important to us. Who knew it would all get overshadowed by the guilds? (Well, we sort of did.) But, the work that went into creating this world should not go unrecognized for its own merits.

This may seem like a look back, but remember that Guildpact and Dissension both take place in the same land-choking city sprawl that Ravnica sets up. One last panoramic gaze at the buzzing complex city can only strengthen our appreciation for the place in which our new cards fight for survival (and for an affordable apartment with a nice view of Vitu-Ghazi - blast those Orzhov and their inflated rent!) 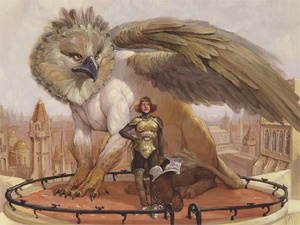 It would be really cool if I could tell you that every piece of Ravnica block art showed at least a glimpse of the city. I cannot do that. But, what I can tell you is that were successful in making sure none of the art showed that we were not in the city. Some creature cards show little background, but none show open spaces, undeveloped wildlands, or nature without encroaching civilization. Skyrider Trainee (left) is one of my favorite Guildpact paintings. Check out the detailed background and the sweet specially-made griffin landing platform. It's this sort of piece that makes the city world rich and alive.

We're going to focus our panoramic lens at flavor text. It's the one place on cards that has no obligation to the game. It can dish out the flavor as specifically and as un-card-related as it wishes. It is here that we can get the clearest shot of all the wonderful vistas, as well as the tightest shots on all the secret intricacies of the city.

I've arranged these various “shots” into categories. You can gain new appreciation for the message that flavor text sends when you look at them in groups. You'll start to really “feel” the impact of their meaning, an impact you may not feel when you're reading the (most likely) unrelated flavor text on the cards in your deck.

“How truly vast this city must be, that I have traveled so far and seen so much, yet never once found the place where the buildings fail.” 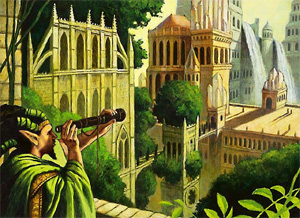 Farseek's flavor text is a great place to start (or end.) It sums up the vastness of it all in one desperate sentence. It also lends itself nicely to the theme of this flavor text grouping- Nature Overpowered. If the buildings never fail, then where are the trees, the meadows, the wild lands. Well, read on and it will become clear.

So-called “old wood” is rare in deforested Ravnica. Statues carved from it are said to house the last of the ancient nature spirits.

Doh! I guess that explains that. And what of the poor creatures of these deforested areas? How do they adapt?

Long ago, birds of paradise littered the skies. Thanks to the city's sprawl, most now exist as pets of society's elite.

Screeching Griffin: They were master fishers, but their seas are now the streets and their catch, the goblins that run pell-mell from the screeching in the sky.

The lammasu ruled the velds before the city grew. Now they roam Ravnica's skies, but their ancient enemies have not forgotten them.

The spires of Ravnica are no different from the tall trees of other planes. The elves navigate and protect them just the same.

That's a pretty harsh existence for the former folk of the forests and furrows. But we all saw Jurassic Park, and how that ended up. “Nature finds a way,” they say. Is Ravnica really any different? Bramble Elemental's flavor text suggests it is not.

Ravnica is a seamless urban tapestry, each city bleeding into the next. In abandoned corners, however, nature has begun to reclaim what it once owned.

“Looking out the great windows of Vitu-Ghazi at the foundry stacks belching their smoke to the sky, I wonder when the sky will take its vengeance.”
—Heruj, Selesnya initiate

Ooh, that was a Guildpact quote. Well, Guildpact offers quite a bit of new insight into this shoving match between city and nature. Don't be surprised if we see more of it next week, with the Guild that likes nothing more than to shove. 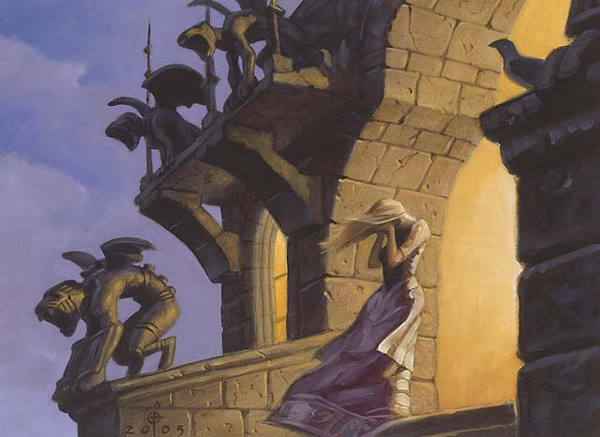 Daren Bader's painting above is a wonderful snapshot of Ravnica's haunting (pardon the pun) architecture and its downtrodden citizenry.

Voyager staffs are sought by those hoping to find an escape from the sprawling glut of Ravnica.

Aw, what can be so bad? Here's what one of the city's own citizens has to say:

“I crept up on him, quiet as a guttermouse. And then suddenly I found myself facedown in a latrine pit behind Tin Street Market.”
—Sirislav, Dimir spy

Hmmm, when a city's thugs and spies complain about the sort of folks you meet, things cannot be good. And speaking of latrine pits:

They hardly have form, dripping through pipe and grate with the slip and stench of flowing sewage.

“Use the restrooms at your own risk” – Sign at the Titan's Keg tavern. It's just this sort of information that keeps the locals on their toes and out of the sketchy parts of town.

Citizens of Ravnica stick to the main streets. Shortcuts may look tempting, but down each alley, dozens of hungry hands await, and screams do not carry into the busy market throng.

Her cold wail echoes in the alleys and under-eaves, finding the unfortunate and turning their blood to ice.

Few have seen the inner workings of Ravnica's furnaces, but neighboring districts catch brief glimpses in the horrors that escape the flames.

They chase tirelessly after the bone-carts that speed along the streets of the Plague Quarter. 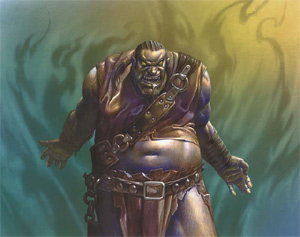 A funny thing occurred to me after reading this last piece of flavor text from Carrion Howler. I thought, “Oooh, bone-carts…'Plague Quarter,' I would not want to go there.” Well, what about the fact that the dogs that are chasing these carts are dead! Ravnica may have taverns and markets and public toilets, but could you imagine approaching the latrine pit after this guy just got finished? The amazing thing about this city is that it functions with all the organization and civic responsibility of an Earth city, but with dead dogs barking and dripping sewer spirits and all sorts of other creepy and beastly residents. It is most definitely not a normal place to live (which is why it makes such a wonderful setting for Magic!) But it's not all manic monsterville. Occasionally there is a brief respite of peace and quiet:

It drifts through the streets as a breeze of collective sighs, wilting the bustle with dreams and heavy eyelids.

Aaah. Ravnica. It's not such a bad place after all. Wait! What am I saying? Look at this crazy freak thing that lives two streets over! If there's one thing true about Ravnica, it's that the city is abuzz with business. Whether it's the sale of foods or undead slaves, the construction of apartment buildings or shrines to the Demonlord, or the trade of real estate deeds or deeds for human souls, Ravnica is in a constant state of Wall Street hustle.

Nothing stops industry in Ravnica—certainly not the safety of its workers.

Ravnica's laws protect not its citizens but its industry. Aging equipment is destroyed rather than restored, to bring more money into the factories' coffers.

The Orzhov started using hawks as messengers in order to bypass the many toll roads and bridges that dot Ravnica. Soon the service became one of their most profitable businesses.

Hmmm…sounds like Ravnica is not the place to wear a blue collar.

The Rubblefield was once among the wealthiest districts in Ravnica. All it took was a single wurm to reduce it to ruins.

The Orzhov run a construction unit whose only business is rebuilding the wreckage left in the wake of wurms. When business is slow, they pay Golgari carnomancers to lure the wurms to the surface.

Most of the city-specific flavor we've been re-enjoying comes courtesy of Ravnica: City of Guilds. The task of setting the stage rests upon the first set of a block. I think it has done its job well. Guildpact and Dissension will continue to play out the saga of the guilds in the alleys, piazzas, palaces and dungeons of Ravnica. But, what the city means to the remaining six guilds is a whole new ball of cement. For a quick taste of how the Gruul, the Orzhov, and the Izzet bring the city to life (ha!) - have a gander at these pieces of Guildpact art, up close and personal. 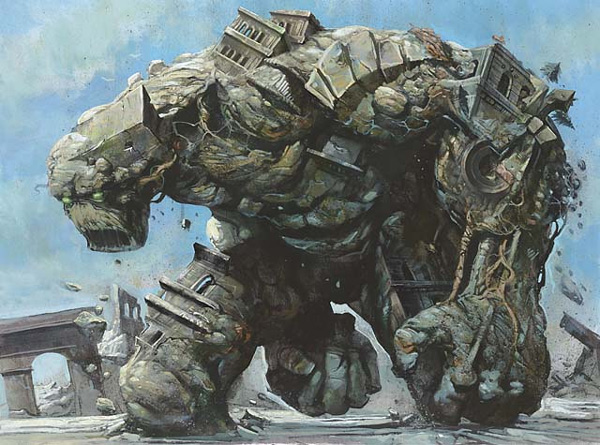 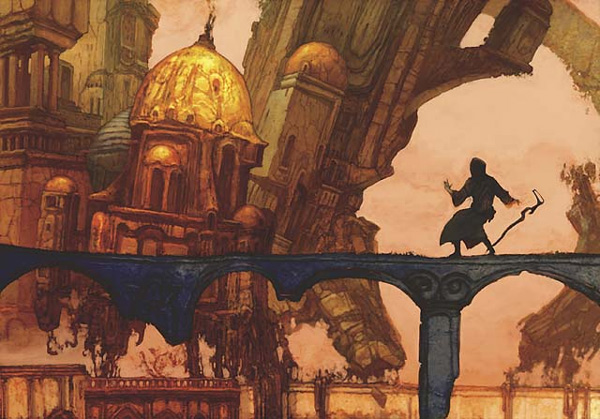