The Life of the Party

know that one guy who really makes the party get wild? Everybody likes him because he's always in a good mood, and that good mood is infectious. He makes everybody laugh and feel good about themselves. He might bring a parrot to the party, or a bongo drum, or a cask of exotic wine from a distant paradise. He manages to find that one guy who is the party-pooper and make everybody laugh even more at his expense. Without him, it's still a gathering... but with him, it's a party.

Today I get to preview the card that is The Life of the Party. For the Vorthoses out there who are wondering where the party is, let me explain. Yes, Dominaria is a war-torn and ragged place where parties are the distant memories of warriors, wizards, and all who are in a constant struggle to survive. When death waits around every corner, you don't have a drink and play Twister. But all it takes for a party to erupt is a bit of good news, a break in the clouds, a glimmer of hope. Future Sight offers this hope. Teferi and other planeswalkers bring about a break in the cloud or temporal storms. And our preview card brings a bit of good news—in the form of exotic wine from a distant paradise.

This preview shows how the Magus cycle, or should I say cycles, are completed. Time Spiral's Magi are all devoted to mighty artifacts of the ancient world. Planar Chaos brought us Magi devoted to great lands from all across Dominaria. Future Sight completes the triad with Magi who perpetuate the ancient magic of renowned enchantments. Magus of the Vineyard refers to the Tempest card Eladamri's Vineyard. Like all the other Magi, Vinny retains the exact mana cost and rules text as its namesake.

Battered and beaten by years of salt and claw, he never ceased to walk, and to seed. Only now, in this time of rebirth, do his seeds take root.

I like how the flavor text suggests that these Magi have always been around, trying to spread the magic of that one bounteous vineyard from ages ago. Only the world has not been ready. You can see in the art how the Magus walks into a crusty and gray world. The only color we see blossoms in his path and from the staff that holds his one devoted spell. (I have to take this opportunity to reiterate my awe at and submission to the mastery of Jim Murray. His paintings are so crisp and textural, but somehow also retain the life and gesture of less detailed work. His drawing is superb and his characterization is thorough and unique. If you're lucky enough to see Jim at a Magic event, gush at him and buy his wares—let him know how appreciated he is by the Magic community. Someone with this much talent is going to get scooped up by comics, books, movies, or all of them. Give him his props so he always keep a little room in his schedule for us.)

It has been a long, long time since these seeds have produced their wondrous vine. And it has been equally long since that vine yielded its fruit and potent wine. Hmmm...what do we do with this great blessing of mana?

Invite more people to the party, of course! Vinny on turn one can make turn two absolutely explosive. Search your pile of green cards for any of the many fat party animals just waiting to krump your opponent into submission. Giant Solifuge, Rumbling Slum, Timbermare, Loxodon Hierarch, Sporesower Thallid—all large and ready to rage. Of course, you could always invite another Magus along with a Call of the Herd or a Groundbreaker. That would mean you would have seven mana on turn three with which you could do just about anything. Protean Hulk? He's quite a host himself, bringing more bodies to the dance floor when he goes to the graveyard. I am not your main man for combo or deck ideas, but I can say that Vinny opens up a lot of doors. A lot of cards that you thought cost too much may be in your price range now that Vinny is your hook-up.

But there's something that you need to remember. Vinny likes everybody. He's the life of the party. That means he makes your opponent laugh too, and gets him all sauced up on extra mana. You don't want to invite Magus of the Vinyard to your little cocktail get-together with your two accountants and their wives. Unless you have a full-blown bash in your deck, your opponent is going to have just as much fun guzzling the mana as you will. In order to break the symmetry, you have to load your deck with big threats—unless, of course, your opponent is a party-pooper. 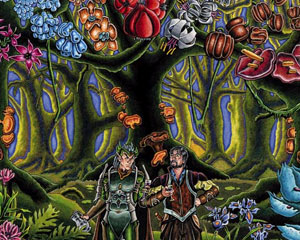 Vinny takes jabs at the party-pooper to the amusement of all. Torturing the duds and lightweights of the world is an old tradition that goes all the way back to the days of Eladamri. His many druids spent their days tending the mother-vines, sharpening their wit, and hardening their stomachs. They aimed to bounce anyone who arrived not to party but to keep others from partying.

So beware all you duds, fun police, and party-poopers. (That means you, Mr. Counterspell Man.) If your plan is to draw a card and say "Go," you are in for a couple of jabs from Vinny. Way back when Tempest was still in Standard (then called Type II,) Eladamri's Vineyard was a common sideboard card, and was even a main part of metagame decks out to stick it to Mr. Counterspell Man.

I don't know what the current state of Standard is, or any other format for that matter. You'll have to consult my Thursday buddy here at magicthegathering.com, Mike Flores, for that sort of info. The way I see it, metagame shmetagame—Magus of the Vineyard is not a reactive sort of guy. He's there for you to put to use. Get to the meaty mid-game right off the bat. What do you do with the mana? Summon huge dudes, of course. Now that I think of it, Vinny is not just the fun guy at the party, he's also the little guy who makes bigger guys better at crushing people—like a football coach. Vinny is not just the guy from the vineyard, he's like Vince Lombardi, one of the greatest football coaches ever. Here's a bit of Vince's wisdom:

"And in truth, I've never known a man worth his salt who in the long run, deep down in his heart, didn't appreciate the grind, the discipline. There is something in good men that really yearns for discipline and the harsh reality of head to head combat.

"... I firmly believe that any man's finest hour—his greatest fulfillment to all he holds dear—is that moment when he has to work his heart out in a good cause and he's exhausted on the field of battle —victorious."

See? "Head to head combat," the "field of battle." A great man is speaking to you from the grave (Lombardi is dead), telling you to summon monsters and attack!