have been spending a lot of our time and energy lately on the guilds and their bichromatic coolness. They're new, they're interesting, and they're chock-full of things to talk about. But, I received an email recently that made me think about them a different way. It was from Blazing Archon, and here's what he had to say:

Guilds guilds guilds. All you guys see is the guilds. Take it from me, they're not “all that.” They bicker and backstab, they fight like dogs for scraps of power. Death litters the floors of the guildhalls. Sure, I know, there are some guilds that are happy about that. 'The Golgari don't bury their dead. Golgari Germination.' Look, I wised up and got out of that seedy racket- and I'm proud of it. I've come to know that there's plenty of noteworthy stuff in this city that has nothing to do with the ten bully-clubs. How about taking a look at that instead of inflating the egos of the already head-bloated guilds? 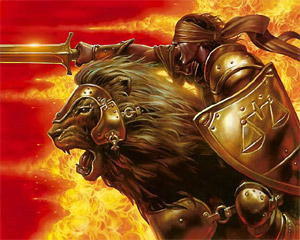 Wow, I detect some bitterness there. Not surprising, since the Gruul have been the redheaded stepchild of the guilds for centuries. So poor Gravin went from persecuted guild guy to persecuted non-guild guy. Still, there is some nobility in his newfound pride for his home city. Since nobility is not something you'd often find in a Gruul, I'd attribute it to his moment of epiphany- his first sight of the might and majesty of the Blazing Archon.

“Through the haze of battle I saw the glint of sun on golden mane, the sheen of glory clad in mail, and I dropped my sword and wept at the idiocy of war.”
--Dravin, Gruul deserter

I think I'll give Dravin what he asks. Today we're going to explore the wonders of Ravnica that do not bear signets. And, to reward Dravin for his civic pride, we will start with his very own savior, the Blazing Archon.

We don't have to look far to see the unabashed coolness of the Archon. He's an awesome sight, all clad in golden mail and wreathed in fire, riding a flying armored war-lion. Oh, and he's not just eye candy- he's mighty. So mighty, in fact, that no one, not even a guildmaster, would dare attack him. I'm sure Szadek has his shady people trying to eliminate the archons. But, for now, the guildless can always point to the leonine fireball in the sky and have claim to at least a moment of pride (until some Orzhov diplomat has her thugs rough them up for this month's dues.)

On the other end of the spectrum, there is another sight to behold. But this one does not instill awe, pride, or epiphany. It is a visage of horror that instills the impulse to flee and the need for a new house. It is the Helldozer. The 'dozer is a perfect fit for our Ravnica home team theme. While it may seem like all it does is wreck the city (which is true), the reason for its wrecking rampage makes it an unlikely champion of the citizenry. You see, the Helldozer exists because of the guilds. None will claim it because it's too hard to control, but it most definitely is the product of the guilds, both physically and (if you can say this about a zombie) mentally. They were created in a joint venture between the Golgari and Orzhov, the two most business-oriented guilds, to be used as one-giant demolition teams. They would be cut loose on decaying neighborhoods in need of “reclamation.” Sometimes, the inhabitants would be notified of the demolition. The Orzhov would control all contracts on the rebuilding of the reclamation zones and the Golgari would claim all dead that result from “accidental” loss of life during the demolition. Nasty, nasty guilds. Nasty even to the helldozers themselves. The 'dozers were tortured (to instill proper temperament for the job), mangled (“here, give me your arms and have these acid-filled wrecking balls instead”), and forced to “work” amid the harrowing cries of innocents being crushed beneath the weight of guilded rubble. I think the flavor text on Coalhauler Swine sums up this whole scene pretty well:

Nothing stops industry in Ravnica--Certainly not the safety of its workers.

Downtrodden RavnicansThis sort of treatment works fine on a person with fear of death. Being that they are already dead, this treatment ended up backfiring on the guilds. The angry 'dozers stopped listening to the puny guildforemen barking orders at them. They stopped heeding the command of the guilds entirely. But, they did not stop smashing stuff. Their minds were twisted and bent on smashing stuff. Now they're uncontrollable and nearly mindless. Nearly. There is just enough left going on in their little tortured brains to take special pleasure in the smashing of guild properties. It is this tiny glimmer of anti-guildhall mentality that makes Helldozer a favorite antihero among Vindictive Mob. 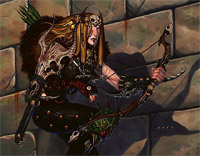 Trophy Hunter is another hero of the guildless, though she's much more discrete and precise with her anti-guild message. Though they do talk about her deeds down at the Hammerfist Giant, she does her work in near-secret solitude. From her name and her art, you probably came to the conclusion that she hunts foes and uses their bones and such as decorative “trophies.” This is all true. But there is a little more to it, a little scuttlebutt that you'd only know if she saved your skin once, or if you overheard Wizened Snitches at the tavern. The secret lies in her flavor text. “What flavor text? There's no flavor text!” While I'd like to say we “hid” the flavor text to convey her sense of secrecy, it was really just because the card ran out of room. Anyway, here's what they're saying down at the ale house:

"You will know that I reject your guild contract when the bones of your messenger hang from my belt."

That's the spirit! A little 'tude from the lady dressed in bones. I am sure this, along with her mysterious good looks (great art by R.K. Post), makes her very popular around Vedalken Dismisser. 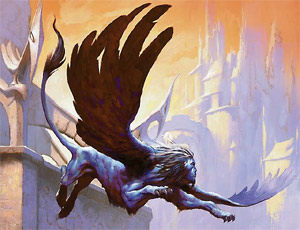 (Sure, there's a little substance here, but it's really just an excuse to showcase some art that I like.)On the subject of secrecy, let's take a look at a subtle example of guilds getting their comeuppance from the non-guilded. Check out the flavor text on Cerulean Sphinx.

“About the sphinx, I have mixed feelings. Their wisdom I crave, but their secrecy I can't tolerate.”
--Szadek

“Ha! You will not control me, fanged one!” I like how this sphinx does not even bother with the riddles. You're just not getting the info, at all. And if you try to use force, the favored technique of the guilds, this cagey creature disappears, off to its secret lair.

You know, Dravin is not the only Ravnican to send us a message. Actually, we've gotten scads of letters, scrolls, and tablets of thanks or complaint or threats or even love- all delivered by courier hawk from the inhabitants of the great City-Plane. One of them fits well today's theme of Ravnican home-town pride.

I am a big fan of landscape art. Actually, I consider myself a bit of a landscape artist myself. I just don't think anything rivals the basic beauty of a vast, panoramic vision of the world we live in. Recently, I have found that I have very specific tastes when it comes to the art I like. I make regular trips to the 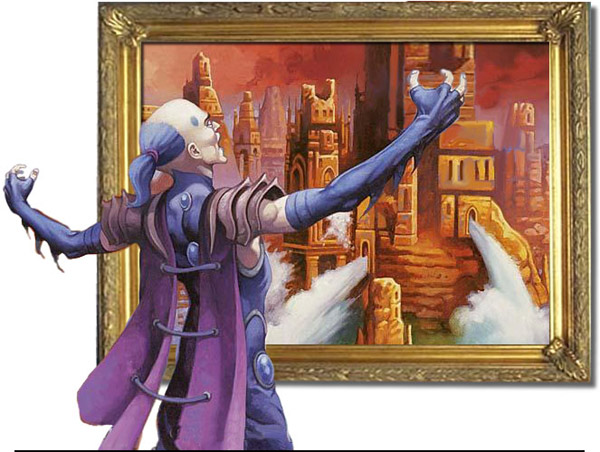 Ravnica Museum of Art and History, but I end up spending all my time in the contemporary art wing. Some of the old masters just don't do it for me. Their vision and technique are too simple. Some of the collection is just unbearable junk.

Forgive me Mother Nature, but the land just looks better with a Ravnican touch. Nope, art history just doesn't work for me anymore. Now all I can do is bask in the beauty of art in the present, with my great city as it is seen through the eyes of Wright, Waters, Moeller, and Martiniere. This new movement in landscape art captures the ages of civic cooperation that culminate in a complex tapestry of metropolitan grandeur. If it sounds like I am sappy for my city it's because I am. There's no place I'd rather be than the city so big it has no limits. These artists make me proud to be a Ravnican, and proud to call myself a Ravnican landscape artist.

Theofolz might be a bit biased in his opinion, but for the most part I agree with him. There has been some really nice land art, but I just don't think there has ever been such a thorough collection of amazing art as there is on the Ravnica basic lands. Go team!

OK, that'll about wrap it up for today. Sorry about the abrupt end to our Ravnica rah-rah-fest, but I have just been …asked, to “cut the pro-city anti-guild blather.” I don't know who it was, he (it?) just appeared behind me and held something sharp to the back of my neck. One of the guilds' stoolies, obviously. Which guild? I cannot be sure, but I have my suspicions. I won't make any accusations here, but it may not be the folks you'd think it is. Given how easily he (it?) got into my office, I feel like I should obey. But before I do, here are a few more little guildless tidbits I encourage you to chec- ouch! OK, forget it.