A Look at the World Finalists 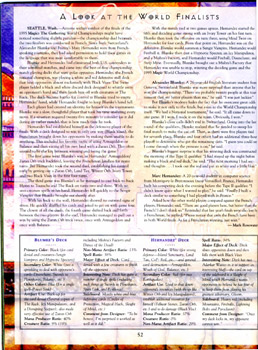 Seattle, Wash.—Anyone within earshot of the finals of the 1995 Magic: The Gathering World Championships might have noticed something slightly peculiar—the championship duel between the two finalists was conducted in French. Since both Switzerland's Alexander Blumke and France's Marc Hernandez were from French-speaking countries, they had asked permission to hold their games in the language that was must comfortable to them.

Blumke and Hernandez had eliminated both U.S. contenders in their semifinal matches, and came into the best-of-five championship match playing decks that were polar opposites. Hernandez, the French national champion, was playing a white and red defensive stall deck that beat opponents almost exclusively with Black Vises. The Swiss player fielded a black and white discard deck designed to whittle away an opponent's hand and then finish him off with creatures or The Rack. The duels became battles for control as Blumke tried to empty Hernandez' hand, while Hernandez fought to keep Blumke's hand full.

Each player had created an identity for himself in the tournament. Blumke was a slow, thoughtful player that took his time analyzing every move. If a situation required twenty-five minutes to consider (as it did during an earlier match), that is how much time he took.

Hemandez had established himself as the defensive player of the finals. With a deck designed to win in only one way (Black Vise), the Frenchman brought down his opponents by making them unable to do anything. This included his favorite tactic of using Armageddon or Balance and then eating all his own land with a Zuran Orb. This often seemed to be the key between winning and losing the game.

The third game was Blumke's as he managed to cast back-to-hack Hymn to Tourach and The Rack on turns two and three. With no anti-creature spells in his hand, Hernandez fell quickly to the Sengir Vampire that Blumke brought out shortly after.

With his back to the wall, Hemandez showed no outward signs of stress. He quickly shuffled his cards and asked to get on with Game 4. The closest of all the duels, the fourth game shifted back and forth between the two players. In the end, Hernandez managed to pull out a win by using the Zuran Orb trick twice, once with Armageddon and once with Balance.

With the match tied at two games apiece, Hernandez started the fifth and deciding game strong with an Ivory Tower on his first turn. Blumke then took the offensive on turn three, using Mind Twist on Hemandez for four cards. From that point on, Hernandez was on the defensive. Blumke would summon a Sengir Vampire. Hernandez would Fireball it. Blumke then cast a Hypnotic Specter, an Icy Manipulator, and a Mishra's Factory, and Hernandez would Fireball, Disenchant, and Strip Mine. Eventually, Blumke brought out a Mishra's Factory that Hernandez was unable to stop, winning the deciding game and the 1995 Magic World Championship.

Alexander Blumke: A 26-year-old English literature student from Geneva, Switzerland, Blumke was more surprised than anyone that he won the championship. "There are probably twenty people at this tournament that are better players than me," he said. "I was just luckier."

But Blumke's modesty hides the fact that he overcame great odds to make it not only to the finals, but even to the World Championship itself. "We had a National tournament," he said. "It all came down to one game. If I won, I made it on the team. Obviously, I won."

Blumke's close calls didn't end in Switzerland. Going into the last round of the qualifiers, Blumke realized that he needed to sweep his final match to make the cut-off. Then, as there were five players tied for seventh place Blumke and four others had an additional three-hour playoff to determine who got the remaining slots. "I guess you could say I come through when the pressure is on," he said.

Blumke's biggest surprise is that his winning deck was constructed the morning of the Type II qualifier. "I had stayed up the night before making a black and red deck," he said. "The next morning I had second thoughts . . . I took out the red and put in white and a little black.'"

Marc Hernandez: A 20-year-old student in computer science from Montigory-le-Bretonneux (near Versailles), France, Hernandez built his competing deck the evening before the Type II qualifier. "I didn't know quite what I wanted to play," he said. "Finally I built a deck similar to something I had played with in France."

Asked how the other world players compared against the French players, Hernandez said, "There are good players here, but better than the French? I don't think so." Reminded that last year's finals were also lost by a Frenchman, he replied. "Please notice that only the French have been in both World finals. As for a Frenchman winning, just wait."